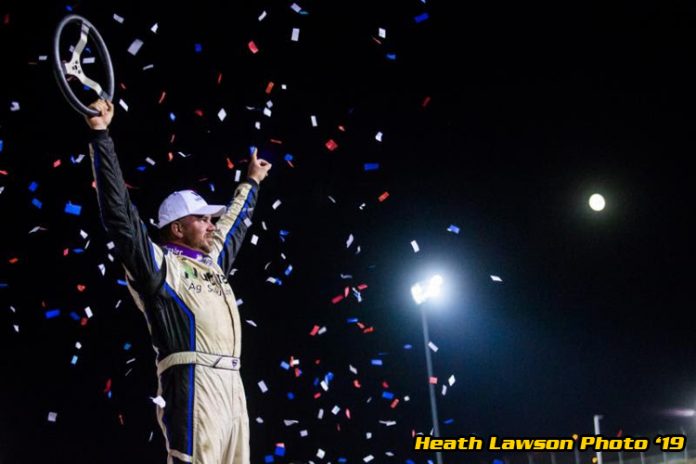 GREENWOOD, NE – For the second consecutive year, Jonathan Davenport claimed a thrilling victory in the Malvern Bank Go 50 at I-80 Speedway.

The race saw five different drivers grab the lead at one point. Davenport became the last of the five, as he took the point on lap 34 from Brandon Sheppard and cruised on to his tenth Lucas Oil Late Model Dirt Series win of the season. Davenport and Sheppard were followed to the finish line by Devin Moran, Mason Zeigler, and Shannon Babb.

Tyler Bruening led the first lap until Tyler Erb took over the top spot just one lap later. Erb held his lead until Zeigler; last year’s Lucas Oil Rookie-of-the-Year; grabbed the lead away from him. Zeigler held on to the point until Sheppard went by him on lap 21.

Sheppard and Davenport ran one-two using the top groove for several circuits, until Davenport caught Sheppard on lap 34 to gain the lead and held it to the finish line. Davenport was able to pull away on the final lap to pick up the victory and extend his series points lead over Josh Richards and Tyler Erb.

“It was a little shaky at the end,” Davenport commented. “But once we got passed traffic, we were good to go. I knew he [Sheppard] would probably be on the top. We had a little problem with the car after the heat, but Jason and the crew got it fixed. We took off pretty good and then started to pick up the pace around the halfway mark when we got in to second. Brandon and I rode that top groove for a long time until I was finally able to catch him and pass him. I am sure that was a heck of a race to watch.”


Davenport added: “This is a new car we rolled out tonight. This was our Eldora car. We will come back here the next two days and see if we can get it done again. Thanks to Steve Martin of Nutrien Ag Solutions for all he does for our race team.”

Sheppard; who has one LOLMDS win this season; led 13 laps and came home in second place. “We had a real good car. I want to thank Mark Richards, Steve Baker and my whole crew. We were right there at the end. I thought maybe with two to go we had another shot at him. That one caution hurt us because we had a run up top on the restart and I think we might have cleared him [Davenport], but we will come back tomorrow night and hope for a good racetrack like they gave us tonight.”

Moran, who earned the Optima Batteries Hard Charger of the Race, came home with a third-place finish. “We finally got it rolling after a while. Tyler [Erb] and I had a great race for a long time, we were throwing sliders on each other. I think we touched maybe once but it was good hard racing. I didn’t need those last cautions because we were moving good on the bottom through the middle. Congrats to JD and Sheppy. This is our first-time here and it has quickly become one of my favorite tracks to race on.”