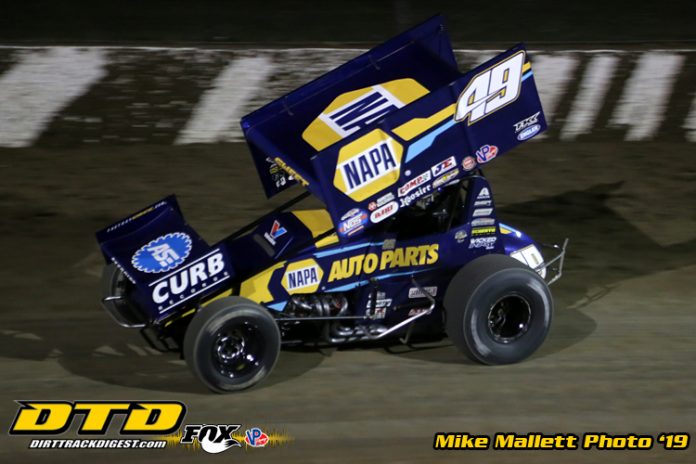 ROSSBURG, OH – The flagman held the checkered flag tight, anxiously waiting to thrust it in the air and wave it over Eldora Speedway when the leader exited turn four.

The question of who that victor would be left the crowd of thousands in a knot throughout the 30-lap $10,000-to-win Jokers Wild Feature Thursday night.

Brad Sweet lead, but Donny Schatz – fresh off a win at Eldora from the night before – hung on to the NAPA Auto Parts No. 49 car’s bumper throughout the race. The two swapped positions lap after lap in the early circuits.

However, Sweet found the 16-time Eldora Speedway winner’s kryptonite – the high line up against the wall. If the walls of the half-mile track had eyes, Sweet made sure they were closed all race, leaving inches between the concrete barrier and his right rear tire most of the night.

Schatz wasn’t able to run the top groove like Sweet, having to move off it and stick to the bottom. That allowed Sweet to use the momentum of the high side to fend of challenges by the 10-time Series champion and claim his 10th World of Outlaws NOS Energy Drink Sprint Car Series win of the season – 44th Series win overall.


“We held off Donny,” Sweet said, after winning for the second time at the Ohio track. “That’s what it takes to win at Eldora. He threw everything he had at me. I saw him multiple times. I just wasn’t sure where to be on the race track there at the end. I felt pretty good on the top, but it’s such a fine line.”

The win was a rebound for Sweet and his Kasey Kahne Racing team after a fourth-place finish at the speedway Wednesday night – which to Sweet and his crew was a disappointing run.

Withholding the fine details, Sweet said, they tried something different with the set up for Thursday night’s race, and it worked.

He was second fastest in the first flight of Qualifying. Then went on to win his Drydene Heat race and the first of two DIRTVision Fast Pass Dash races. But every step Sweet made, Schatz was there following in his footsteps. The reigning champion went second fastest in the second flight of Qualifying. He, too, won his Drydene Heat race and claimed the win in the second Dash of the night.

That placed the two championship contenders on the front row together. The title match at Eldora Speedway was set.

When the flagman thrusted the green flag in the air, Sweet passed the flag stand first, but Schatz launched underneath the Grass Valley, Calif.-native looking to take the lead on the first lap in turn one. Sweet had the momentum on the high side, though. He charged around the Toco Warranty No. 15 down the backstretch and moved to the bottom of the track in turns three and four.

Schatz did the opposite. He ran the high line through turns three and four, giving him a strong enough run down the front stretch to again dive underneath Sweet in turn one. This time, Schatz had the lead.

Sweet wasn’t about to let Schatz cruise to another Eldora win over him, though. He charged back around Schatz the next lap and began to put distance between the two.

“He makes it awful tough when he sets his pace and runs his lines,” Sweet said. “It makes it real hard to pass. I wanted to get ahead and set a pace.”

Ten laps into the Feature Logan Schuchart also made his way around Schatz by riding the high line. However, he got held up by a lap car going into turn three and Schatz took the opportunity to pounce. The Tony Stewart/Curb-Agajanian Racing driver made a massive drive to the bottom of the track through turns three and four, blowing by Schuchart and gaining about four car lengths on Sweet off the corner.

He carried the momentum through the next corner, getting underneath Sweet and edging him by a nose off turn two with 19 laps to go. Sweet, again, used the high side to propel his car back in front of Schatz down the backstretch, though.

Into turn three the duo both slid their cars sideways to the bottom of the track, almost making contact at the apex. With Sweet blocking Schatz’s lane, he charged off the corner to a comfortable lead and added to it from there.

Schatz then had to compete with Schuchart for second, eventually losing the position to the Drydene No. 1s car right before a caution with 11 laps to.

When the race resumed, Schuchart had a terrible restart, falling from second to fifth and stacking up the top line behind him. His mistake allowed Schatz an easy pass for second and another shot at Sweet.

While Sweet stayed high, Schatz was determined to make the low line work. He put together enough of a charge to get side-by-side with Sweet in turn one the next lap, but the run was still no match for Sweet’s mastery of the high line.

“We stayed with him there, he was ripping the top, I had to get off it,” Schatz said about the final restart. “We thought we were going to be a shot at him there, but for some reason when I got to traffic, I couldn’t maneuver well or just kept making mistakes. You’ll have that. If you’re going to do it, I’d rather do it tonight than two nights from now.”

Able to stay in clean air and see where lap cars were going to go, Sweet rode the cushion until the final corner when he moved down a lane to see how his car would do. He was satisfied as he drove by the waving checkered flag for the 10th time this year – the most wins he’s collected in a season, so far.

While it’s an accomplishment he’s proud of, Sweet said there’s still work to do. Still tweaks needed to make the car better. And still many big races on the line – including Saturday’s $175,000-to-win Kings Royal.

“I’m not going to sit and dwell on it too much, because we’re trying to just stay in the moment and keep winning,” Sweet said. “I don’t want to just settle in and say, ‘That’s great, I just won my 10th race.’ Obviously, so far, it’s a dream season, but all of the big races are coming up. I think we just try to keep our heads down and at the end of the season when it’s time to look back at the stats we hope we’ll have 10 more wins, or more, and a championship.”

The World of Outlaws NOS Energy Drink Sprint Car Series will return to Eldora Speedway Friday, July 19, for the Knight Before the Kings Royal. Get tickets and more information. 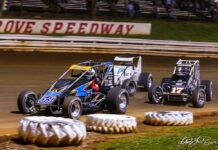 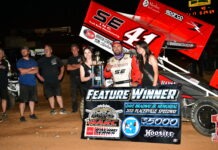