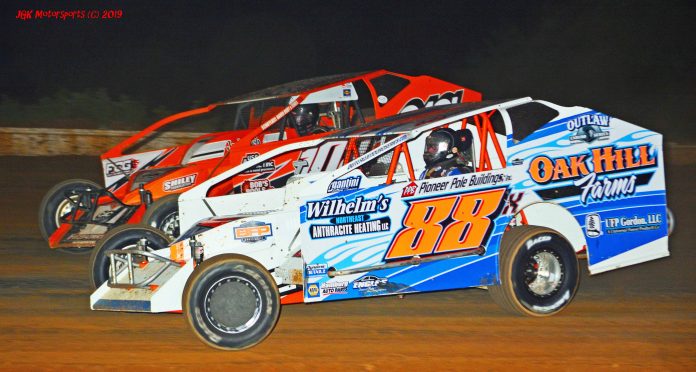 Florida resident Todd Neiheiser brought the 24-car field of modifieds to the green flag and jumped out to the lead at the start. Neiheiser would continue to lead the way as heavy hitters Craig Von Dohren and Ryan Godown were on the move early after starting ninth and eleventh. Von Dohren would move steadily through the field utilizing both the inside and outside grooves. Lap thirteen and Von Dohren would make his move for the lead as he powered by Neiheiser. Once in front Von Dohren would move out to a big lead as Godown worked his way through taking second from Neiheiser on lap 17. Unfortunately for Godown, Von Dohren was gone as he maneuvered through lapped traffic perfectly. While the top three cars continued to lead the way, a fantastic battle was being waged for the latter part of the top five between newcomer Loudon Reimert, Jeff Strunk, Jimmy Reppert, Frank Yankowski and Duane Howard.

The 25-lap feature would run caution free with Von Dohren winning easily over Godown. A fantastic run for the youngster Reimert finishing third with Strunk and Jimmy Reppert rounding out the top five. Heartbreak of the night goes to Neiheiser who broke on the last lap while running third.

The USAC Wingless Sprint cars were making their third and final visit of the season to Big Diamond Speedway on Friday night and just like the first visit it was Steve Drevicki standing in victory lane at nights end.

Austin Bishop would take the early lead from his pole starting spot with outside polesitter Drevicki stalking the leader. Caution would slow the race pace down on lap seven and on the restart, Bishop would continue to lead the way. Drevicki now had his hands full holding on to second as Eric Jennings was applying the pressure. Drevicki would win that battle and start to rundown the leader once again and by lap ten was all over Bishop. The two would wage a terrific battle with Drevicki finally working his way by Bishop on lap fiftenn. Drevicki would start to open up his lead and looked to have an easy go of it racing for the win. However, a lap 24 caution would give Bishop one more shot at the win but Drevicki doesn’t sweat it on this hot summer night and would go on a win the one lap shootout with ease taking his second win of the year in coal country. Bishop would finish second with Carmen Perigo, Joey Biasi and Eddie Strada completing the top five.


Friday night’s 20-lap USS Achey sportsman feature saw a first-time winner gracing the Red, White and Blue Auto’s victory lane as young Dakota Kohler would take his first career victory at the speedway. Pole-sitter Chuck Eckert would bring them down to the green flag, but it would be third place starter Blake Reber who would lead lap one. Lap two would see the fourth-place starter Kohler go by Reber for the lead. 2019 winners Cole Stangle and Brandon Edgar were on the move as well and were now up to third and fourth by the completion of lap three. Five-time winner this season Doug Hendricks had disaster befall his No. 80 as the front end collapsed early in the race ending his night. Kohler would continue to lead the way as the last yellow of the race would display on lap eleven. Kohler would take off on the restart and lead the remaining nine laps to take his first ever checkered flag at Big Diamond. Stangle, Edgar, Tim Fitzpatrick and Wayne Witmer completed the top five.

Chris Holland would power to his third win of the season in the Savage 61 Road Runner main event. Matt Ney would lead lap one with Holland in quick pursuit. The race was slowed by caution on lap five on the restart Holland would power by Ney for the lead and never look back. Matt Ney would finish second with Holland’s dad Kevin returning to the Road Runners and finish an impressive third. Jim Kost and Kris Ney rounded out the top five.