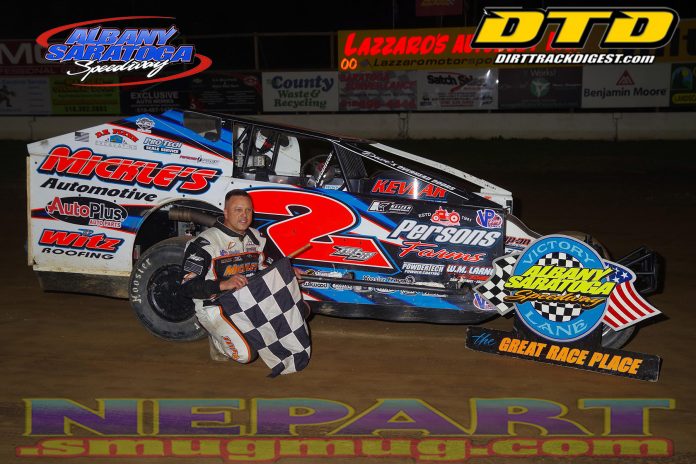 MALTA, NY – Ronnie Johnson picked the hottest week of the summer to build a new race car, but all the sweat was worth it.

Piloting a new TEO chassis that handled like a dream and capitalizing on an advantageous starting position, Johnson notched his second win of the season in Friday night’s 35-lap modified feature at Albany-Saratoga Speedway.

He became the third two-time winner this season, joining Brett Hearn and Peter Britten in that category.

But the win didn’t come easily. Johnson had to survive four late restarts, with Keith Flach, Hearn and Marc Johnson breathing down his neck, to get into victory lane.

The last restart came on lap 32, and had Ronnie Johnson and Hearn on the front row, with Marc Johnson, the current points leader, sitting third.


When starter Rich Peterson threw the green, Ronnie Johnson got a good jump, and Marc Johnson rocketed by Hearn into second. The two Johnsons were dead even passing the flag stand to get the white flag, but when Ronnie Johnson got a little advantage coming out of the second turn, he ducked down into the low lane, breaking Marc Johnson’s momentum, and that’s how they finished.

“Marc really gets going at the end of the race with that small block,” said Ronnie Johnson. “I knew I had to shut the bottom lane off.”

Ronnie Johnson, who started seventh, had a good look at a battle between Flach, who started sixth, and Hearn, who was eighth on the initial grid, early in the race.

Bobby Hackel IV, who started on the outside pole, jumped out to a huge lead over Don Ronca, but all eyes were on Flach and Hearn.

On a restart on lap 14, Flach and Hearn made an incredible move, one going inside and the other going outside to squeeze by Ronca and take over the No. 2 and No. 3 spots.

Another yellow came out on lap 15, when Elmo Reckner went off the second turn. Hackel still had the lead, with Flach second and Hearn third, but things changed in a hurry. On the restart on lap 15, Flach and Hearn came together, forcing both to check up, Hackel suffered a flat right rear tire, and Ronnie Johnson jumped around everyone into the lead.

Marc Johnson, who made his trademark late-race charge after restarting 15th, kept using restarts to pick off cars, and on a restart on lap 20, got around Hearn for third. Ronnie Johnson and Flach continued to run high, leaving the bottom open for Marc Johnson.
A restart on lap 25 aqgain bunched the top four, and Hearn moved back into second om lap 26. Four laps later, Marc Johnson, who was making his best moves between the first and second turns, got by Flach for third.

That set up the final sequence involving the two Johnsons and Hearn.

Marc Johnson, who admits he hates second, now at least says it with a smile, said, ”I was killing those guys in one and two, but in three and four, I was maintaining. I couldn’t get as low as I wanted to over there because there was water down there.”

“I’ve been struggling quite a bit lately,” said Ronnie Johnson. “This is a new car that we started building Sunday afternoon. Hats off to my guys for killing it all week.”

Josh Coonradt drove to his third consecutive victory in the caution-plagued 25-lap pro-stock feature. Peterson threw the yellow flag four times before one lap was even completed. One of those yellows involved the front row duo of Nick Arnold and Dan Older, which resulted in Older getting sent to the rear of the field.

Following all the restarts, Scott Towslee took the lead, but both Coonradt and Luke Horning, making a rare Friday night visit at Malta, were on the charge early. Both were in the top five after just five laps, after starting 11th and 13th, and on a restart on lap 8, Brandon Gray drove by Towslee to get the lead.

Coonradt took the No. 2 spot away Towslee on lap nine and two laps later, had the lead.
Horning continued to stay within striking distance of the leaders, and on a restart on lap 14, got right into Coonradt’s tracks, with Gray running low. Two laps later, Gray bobbled coming out of the second turn, which allowed Horning to take over second, but heading into the third turn, Gray got into Horning’s left rear quarter panel, spinning Horning and taking both the second and third place cars out of contention.

Coonradt then pulled away for an easy win, and Chucky Dumblewski got past Towslee on the final lap for second.

“I want to thank all those people who kept bringing out the cautions,” said Coonradt in victory lane. “The car was overheating, but the temperature dropped about 10 degrees every time there was a caution.”

Gerard LeClair led all 20 laps to win the Haun Welding limited sportsman feature, his first victory of the season. Points leader Dylan Bokus went from his fifth starting position to second on the second lap, and stalked LeClair for the majority of the 20 laps, but LeClair was running a perfect line through the middle, and Bokus couldn’t build up any momentum on the bottom. On lap 19, Dave Richer, who found some bite in the high groove, got past Bokus for the No. 2 spot.

“This car handled from the heat to the feature. Whatever my dad did tonight worked,” said LeClair.

John Filarecki started on the pole and led flag-to-flag to win the 15-lap Lake Auto Parts street stock feature, his third victory of the season. Jimmy Duncan was right on Filarecki’s tail for the second half of the feature because Duncan was cornering better. But he couldn’t find enough traction down the straightaways to get around Filarecki.

Joey Scarborough picked up his first win of the season in the 25-lap sportsman feature. He had a big lead negated by a caution on lap 20, which came out just as Kale Groff began to put heavy pressure on the leader.

But when racing resumed, Groff had his hands fill with Jim Osgood, which allowed Scarborough to pull away for the win. Osgood, Groff and Connor Cleveland came across the finish line three-wide, separated by less than one-tenth of a second.