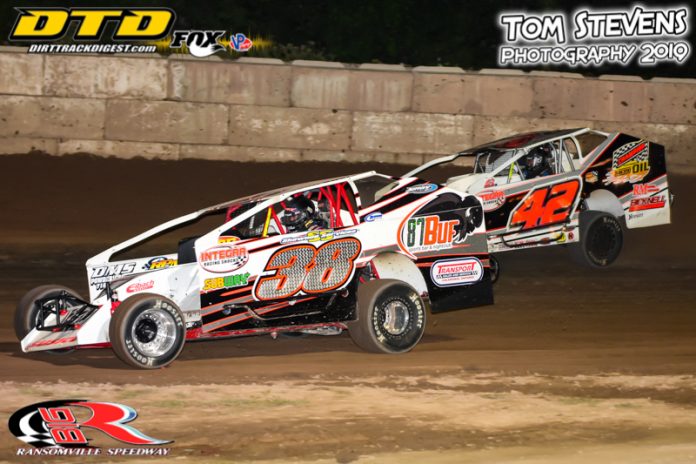 RANSOMVILLE, NY – Ryan Susice of Ransomville was in the right place at the right time to capture his first Krown Undercoating 358 Modified win of the season on Friday night at Ransomville Speedway. Susice was running second when James Sweeting made impact with the turn two wall while leading with just eight laps to go.

In supporting action, Brett Senek of Ransomville won the GRIT Sportsman Series feature for his third win of the year at Ransomville. Pat Dell of Niagara Falls scored his first Ki-Po Chevrolet Street Stock feature win of 2019. In the Gippster’s Collision Mini Stocks, Steve Matson of Ransomville picked up his first win of the season. Orval Harris of Newfane, N.Y. was victorious in the Stevenson’s Hardware Novice Sportsman.

James Sweeting and Rick Richner led the field of 358 Modifieds to the opening green flag on a humid night. Sweeting jumped out to the early followed by third place starter, Erick Rudolph. Rudolph started this season with three-straight wins, but had been shut out of victory lane for the past three races.

Rudolph challenged Sweeting for the lead just before the halfway point of the race. He approached the leader just as they caught a pair of lapped cars on lap 14. The slower traffic got side-by-side in front of the lead duo on the back straightaway, which forced both Sweeting and Rudolph to make a crucial decision. Sweeting went to the outside in turn three while Rudolph went low and drove into the back of lapped car of Brandon Michaud. Michaud spun out to bring out the yellow flag. Rudolph drove away, but had damaged his right front shock tower.

Rudolph headed to the pits, and just barely remained on the lead lap as his crew thrashed to get him back on track.


The race restarted with Sweeting leading Susice, Mike Bowman and Pete Bicknell. Sweeting took off once again when the race restarted to leave Susice and Bowman to race for second. Sweeting looked to be on his way to a feature win until lap 22. His car hopped the cushion, and then slammed the wall in turn two.

Susice took over the lead as Sweeting limped to the pits. He held on for the final eight laps to score his first win of 2019. While Susice had finished in the top ten in all six previous races this season it had been a frustrating start to the year watching other drivers find their way to victory lane.

The GRIT Sportsman Series made its return to the “Big R” after a few years away. The Investor’s Service Sportsman competed against the GRIT Series regulars in a 30-lap feature. Defending track champion Brett Senek and Noah Walker had the luck of the draw to start on the front row for the main event.
Senek led every lap of the race, but he still faced plenty of challenges along the way. The race was slowed seven times by the yellow flag, which gave Senek’s competitors numerous restart opportunities to try outduel the reigning track champ.

The stiffest challenge came from Derek Wagner who moved into second place around lap 12 of the event. Wagner’s car was running fast on the outside line of the track. The numerous restarts forced Senek to use some strategy as he would line up on the outside to prevent Wagner from having that line when the race went back to green.

That decision paid off for Senek as he managed to hold off Wagner all the way to the finish to capture his third Sportsman win of 2019 at the “Big R”. Wagner settled for the runner-up position, which made for the third time in the last four races that Senek and Wagner took the top two spots in the feature. Senek has two wins in that stretch, and Wagner has one.

Kyle Inman made a late charge into the top five to finish third. Canadians Brad Rouse and Adam Leslie completed the top five.

Pat Dell scored the win in the Ki-Po Chevrolet Street Stocks after an exciting four-lap duel with Cory Sawyer that saw Dell take the lead on the final lap of the race. Dell started on the front row for the 20-lap feature, but he got turned around by Anthony Guthrie on the race’s second lap. That sent both cars to the rear of the field.

Jaren Israel inherited the lead after Dell’s spin. He jumped out to the lead while the rest of the top five battled fiercely. That battle got too intense on lap 5 when Pete Stefanski and Brian Monahan hooked fenders in turn two to bring out the caution. Stefanski experienced some rear end issues from the incident, which took him out of the race.

Sawyer got by Israel for the lead on the ensuing restart, and then took off from the field. Dell eventually made his way back to second place on lap 9. He tried to chase down Sawyer for the lead, and while he was making up ground, it was apparent there weren’t enough laps to catch him.

Dell got a break, however, on lap 16 when Dan Korpanty spun to cause one more caution. This set up their four lap shootout to decide the race. Dell cleared Sawyer on the final lap to cross the finish line just 0.4 seconds ahead to earn the win.

The Gippster’s Collision Mini Stock feature came down to a battle between polesitter Steve Matson, Cole Susice and Mike Kramarz. Matson had led every lap from the start of the race, but had Susice and Kramarz lined up on his back bumper in the closing laps.

Orval Harris scored his second career win in the Stevenson’s Hardware Novice Sportsman. Harris led all 15 laps from the pole position. He was followed closely across the finish line by Sam Junkin and Bubby Pawlak. It was Harris’s best run of his rookie season. The third place finish for Pawlak ended his three-race win streak. Mike Martin and Tyler Vinson rounded out the top five.
Next Friday, July 26, Sunflowers of Sanborn and Rutland Corwin Funeral Home will present a full card of racing, including the third annual John Susice Memorial race for the Street Stocks. That event is also the next round of the Ransomville/Humberstone Can-Am Thunder Stock Challenge Series. Racing starts at 7:15 p.m.