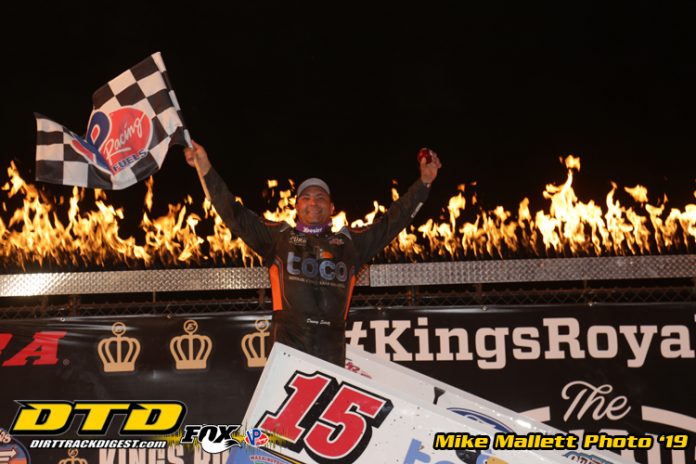 All talk of the 2019 World of Outlaws season so far has been about Brad Sweet and his quest for the championship. He’s been solid winning 10 races to date this year, including one here at Eldora Speedway. Some people are ready to hand the title to the upstart while counting out Donny Schatz. Schatz, on the other hand, has other ideas.

The defending series champion won Friday’s Knight Before the Kings Royal for his third win in the last four World of Outlaw events. That gives him two wins at Eldora as he looks to Saturday night for a $175,000 payday, the largest in Sprint Car history.

“The first thing you have to do is forget about what it pays,” commented Schatz. “I have never raced thinking ‘Oh my God. This race pays 150 (grand). The race pays 50 (grand).’ That is the wrong reason to look at it. It’s great that it pays that, but that’s not what anyone is here for. I probably shouldn’t say that, but that is the last thing that should be on everyone’s mind. Tomorrow is a unique formant; it’s all about winning those heat races. We’ve won three heats leading up to this. Tomorrow the heats are going to be tough if you get qualified good. You have to start fifth in your heat, the second or third row. There isn’t a lot of passing going on. Someone has to make a mistake.”

On Friday night Schatz was okay, but not as good as he wanted to be. He was struggled significantly in traffic. Luckily he was good enough when he needed to be to hold off the challenges of all comers, including David Gravel, who got very close to taking the lead.


“The fact that I sucked everywhere in lapped traffic, I was hanging everywhere I went,” mentioned Schatz. “When you are in lapped traffic and when you are on the top like that, I can’t see where the cushion is at. I was scared I was going to go straight into fence. When I had clean track there was something there to lean on. I couldn’t get ahold of anything in one and two. Tonight was one of them nights where we felt like we were solid the last two nights with our car so we tried something with our car to make it better. We made it better in the dash, but when you put a full load of fuel on, go out there and run the whole race, I was hanging from the word ‘go.’ I was super surprised someone didn’t drive right by us.”

Schatz used the event as a test session for Saturday night’s main-event. He was starting on the front of the feature, so he decided to try some different things in order to get ready for Saturday’s 40-lap feature.

“I thought it was a great time to do it,” stated Schatz. “Normally I’m able to do different things and make my race car do what I want. We tried something different. We ran different bars than we’ve run the last two nights and when we won in May and when we won last year. I know what we are going to do to fix that. You don’t know until you try. You don’t want to sit up there and not start on the pole and not try something. We did it. I know when we get back Scuba’s going to be on the damn fence. “

Schatz and company seem to be gelling at the right time. As mentioned, Schatz has won three of the last four Outlaw events. The team is coming together after some off-season changes.

“Now this team is hitting its stride. It’s hard to put into words,” commented Schatz. “Me and Scuba (Steve Swenson) have raced together the last 10 years. He’s been the backbone of the whole team. He makes sure everything is accounted for. Now he’s the crew chief. You wear a lot of things on your shoulders that you didn’t before. The communication is a little different than it was. It takes a little bit for one to get the other. Sometimes you got to get the bad side out. He knows I’m a fussy son of a bitch.”

Schatz’s only concern entering Saturday night’s Kings Royal is fuel. He’s worried about being able to go 40 laps in the A-Feature event.

“It’s today’s age,” cited Schatz. “Everyone’s motor is burning so much fuel. The thing that is disheartening is we can race 40 laps under the green, but it’s the yellows. We burn about as much as we do under green.”