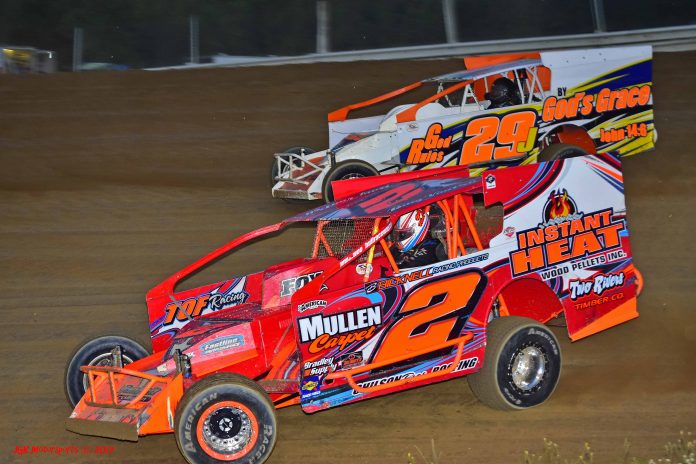 Chris Ostrowsky and Brady Fultz brought the 22-car field of Insinger Performance Modifieds to the green flag. Ostrowsky grabbed the lead but Futlz was on the throttle and took the lead by lap two. Billy Van Pelt piloting his no. 2 machine powered his way into the fourth position on the third lap. Van Pelt battled with Fultz up until lap 11.

Van Pelt held his ground while Cory Costa battled with Fultz for positions. Ostrowsky seemed to have car troubles while under caution as he stopped unexpectedly on the back stretch. This put Dayton Brewer driver of the no. 17 machine into fifth. Joe Dgien came from the back powering to fourth position on lap 16.

Van Pelt pulled away leaving Fultz and Costa to continue their battle. A late race caution adjusted the field. Van Pelt walked away with his fourth win of the season. Fultz claimed second with Costa, Dgien and Brewer finishing the top five.

Kane Stebbins and Scott Waters rolled off the front row in the Cummings Trucking RUSH Crate Late Models. S. Waters wasted no time and pounded some dirt to stretch his lead. John Waters who started towards the back of the pack found his lane on the outside and started picking off positions. Towards the back Brian Knowles and Darin Horton battled for positions along with others.

The Daugherty Auto Sales and Service took the green with Cara Pitts and Scott Lehman leading the pack. Lehman grabbed the lead over Pitts.Josh Webster was quick to move his way through the field and took the lead from Lehman. Carter Crooker who started tenth found his way up to the front and started battling J. Webster for the race lead. On lap seven, Crooker took over the lead from J. Webster.

Ray Hyer who started to the inside of Crooker hustled to the front shortly after Crooker took over the lead. Crooker, Hyer, Jason Ketrow, Chip Warner and J. Webster maintained the top five for the majority of the race battling each other for positions. Lap 15 Hyer got too high in the corner which gave Ketrow the room to sneak through the middle and take over third place from Warner. Crooker got the victory while Hyer, Ketrow, Warner and J. Webster rounded out the top five.

Blake Lawson and Cole Youse led the NAPA Crate Sportsman field to green. A caution of the green flag reset the field. Lawson grabbed the lead while the field battled for positions. Brett Buono, Kenny Peoples Jr., Jake Dgien, and Tony Harris all broke into the top five going after Lawson for the lead. Peoples Jr. battled Buono for the second position and finally got a run on the high side but as Peoples Jr. went to take over the lead the caution came out and set every one back on lap ten. Lap 11 Peoples Jr. went to do it again and grabbed the lead over Lawson.

The Joe Willcox Performance Automatics Street Stocks were lead by Dennis French and Jared Hill to the green flag. French grabbed the lead but Hill stuck right behind him. Branden Morseman and Brett Crawford began battling for second place. Meanwhile competitors went three wide for the fifth position. French continued to lead while Kurt Stebbins broke into the top five.

Glenn Whritenour who was piloting the no. CJ1 machine made his way up to the front and was battling with Dan Gardner driver of the no. 62. Hill continually put pressure on French and made a run on lap 15. Hill didn’t quite have enough but tried until lap 17 when he took over the race lead. French boppled and lost positions giving Morseman and Crawford another shot to battle for second place. Hill brought home his first ‘highbanks’ victory this season while Crawford, Stebbins, Morseman, and Whritenour finished off the top five.

Brent Williams grabbed the race lead early in the Woodhull Auto Supply Hobby Stocks. Behind him points leader, Jeredd Dennis had to drive through some traffic to get to the front. J. Dennis picked off the cars one at a time while other competitors did the same. J. Dennis took the lead from Williams and tried to pull ahead of field.

Aj Niedermaier made his way to second and began to put pressure on J. Dennis. Chris Woodard, former mini stock driver, moved his way to the front and made it a three car battle for the lead. Niedermaier, J. Dennis and Woodard battled it out for three laps. Niedermaier brought home the win with Woodard, J. Dennis, Carter Dennis, and Mike Spencer in tow.

Tess Johnson and Ethan Decker brought the Daugherty Auto Sales and Service Woodhull Warriors to the green flag. A few early race cautions jumbled the field and shortly put points leader, Brooke McClain in the lead. McClain was just begging to stretch out her lead when she suffered a left front flat on lap six. This put Josh Isaman in the lead. Isaman was no stranger to the front row as he had won the week prior.

Baker started to tackle lap traffic while Scott Lehman Jr. moved up into the top five with Nick Brown and Brett Bourdette. Baker continued to stretch his lead and won the race. Brown, Freeland, Lehman Jr.,, and Bourdette rounded off the top five.