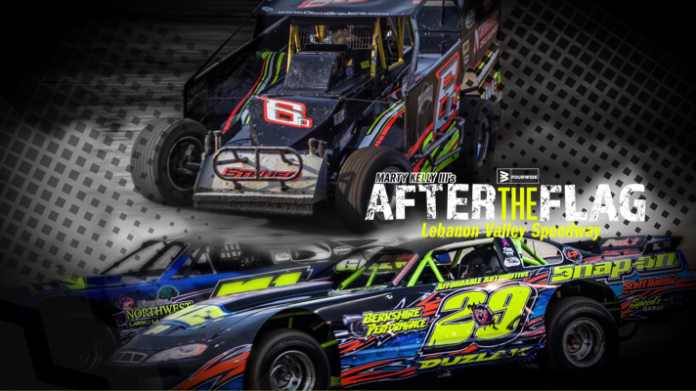 MARTY KELLY III / FOURWIDE –  Rick Duzlak passed Rich Crane on the 13th circuit of Saturday’s DIRTcar Pro Stock Series 30 lap feature and went on to lead the remaining 17 laps to bring home the win for the second time in as many years.

Rich Crane and Tony Markou led 28 DIRTcar pro stocks to the green flag, including Canadian invaders CD Beauchamp, Jocelyn Roy and Mark Lalonde.  Nick Arnold found his way into the runner up spot early behind Crane. The first caution flew on lap eight when Jay Fitzgerald lost his hood down the backstretch. On the restart, Duzlak found the number two spot from his outside lane restarting position. Three more quick caution flags set up a melee on a lap 12 restart involving both Jay and Jason Casey, Jay Fitzgerald, Jocelyn Roy, Tom Dean and Mark Lalonde, among others. This brought about a red flag for lightning over the speedway.
When the Race resumed, Duzlak rubbed fenders with Crane to take the top spot.  The caution came out three more times, including on lap 28 when Jason Meltz and Jay Corbin lined up behind Duzlak for a green-white-checkered finish. Duzlak’s speed on the top side was too much for his competitors to overcome, and he cruised into victory lane with Meltz and Corbin in tow.
“It’s been a tough year,” Duzlak explained. “This is I think the fourth race we have finished. Seems I either crash or win.” Duzlak started third.
Third place runner, Jay Corbin, said he felt good to be back at his former home track, although he was at first unsure if he could still hang on the high banks. Rich Crane and Nick Arnold rounded out the top five.
Dillon Steuer one-upped his second place finish at the valley last Sunday by bringing home a dominant win with the small block modifieds.  Steuer tool the lead early from Alan Houghtailing and survived a late-race restart with Guy Sheldon and Andy Bachetti breathing down his neck. Bachetti got around Sheldon before it was over, but the Bohemia, NY driver Steuer was not to be stopped.
In pure stock competition, Ray Hall, Jr. and Clifford Booth took home the victories.
The Big Block modified feature was coming to green when the dark skies opened up with fury and a torrent of rain fell upon the high banks, ending the NBT Bank and Andy’s Speed Shop card of events prematurely.
Next week, big block modifieds will run double features.