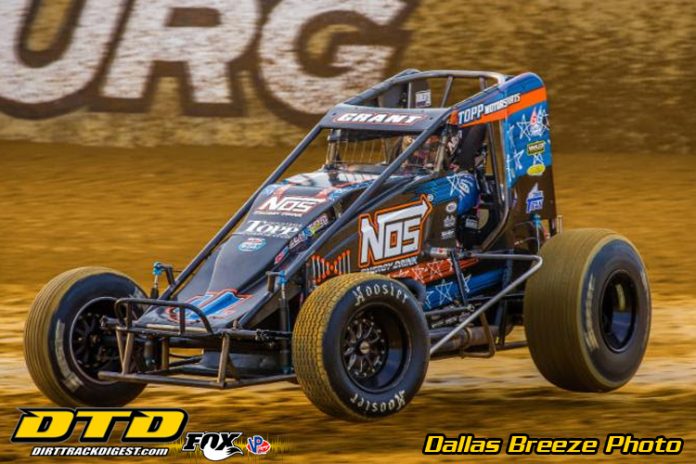 LAWRENCEBURG, IN – For Justin Grant, Lawrenceburg Speedway is akin to a second home.

For it was the track where Grant earned his first career USAC AMSOIL National Sprint Car victory and his lone previous Indiana Sprint Week win seven years earlier. It’s the place in which he won with USAC in 2014 and again in the fall of 2018. And it’s where he earned his latest triumph, Sunday in round four of NOS Energy Drink Indiana Sprint Week.

“I’ve had a lot of special wins here at Lawrenceburg,” Grant said. “I really like it. I raced down here a ton back when I was driving the 40 car for Mark Hery. It was our Saturday night venue. We raced 10-15 Saturday nights a year here for a few years. It’s just a place I’ve always loved coming to.”

In fact, coming into Sunday’s event, Grant had led just two laps in his entire ISW career, both of which came at the conclusion of that 2012 ISW race at the very same track. It’s an ISW career for Grant which includes 12 top-five finishes in 45 starts.

Grant left no doubt on this night, leading all 30 laps from start to finish to win his 15th career USAC AMSOIL National Sprint Car feature, passing Billy Cassella, Jim Hurtubise, Lee Kunzman and Bruce Walkup to move to 34th on the all-time list.

In addition, he became the speedway’s winningest sprint car driver on its reconfiguration into its current 3/8-mile, high banked state.

What had been a flurry of five victories in an eight-race span for Grant and TOPP Motorsports to close out the 2018 season, started off strong with a win in their second start of 2019 in Ocala, Fla. The wait for a return trip to victory lane took five months, but Grant feels the pieces to the puzzle were always there, the pieces just had to fit together.

“It’s been awhile,” Grant acknowledged. “I felt like we’ve had speed here and there early in the night, then we’ve had speed late in the night and just struggled to put a whole night together. We were finally good early and late and we’re able to put all the pieces together. Lawrenceburg was pretty hammer down tonight and the car was screaming around there. It was a lot of fun to drive and I was just kind of hanging on to it trying to keep it out of the fence.”

Although Grant began the 30-lapper from the outside of the front row, at the start, he made a beeline for the bottom, racing to the front of the line and shutting the door on Kokomo ISW winner Chris Windom to be the first to get to turn one. Grant then slid up to the top and broke out to a five-car-length lead.

VanMeveren and Andretti were both finished for the evening. Courtney, Adams and Hodges each restarted with Courtney actually racing back to a 10th place finish at the checkered.

Multiple times within the first ten laps, Windom was able to get a nose under Grant in between turns three and four as the pair ran two distinctive grooves, Grant up on top and Windom working the bottom.

But, as was the case, as such throughout the middle portion of the race, Windom was able to pull even with Grant as he slid to the exit of the corner. Each time, Grant had the momentum from the top to carry him back in front of Windom, no harm, no foul, no muss, no fuss, where Grant maintained an advantage of a tick under a second over Windom.