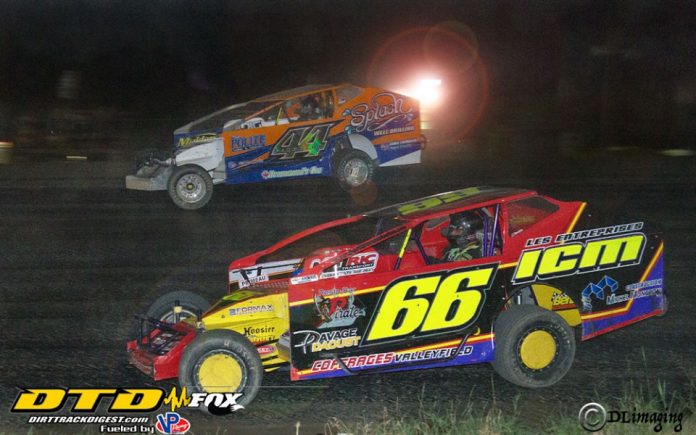 CORNWALL, ON – Sprint Car fans were pleased to see the Patriot Sprint Tour in town along with the 2nd round of the Race for the Cure Sportsman Series and a full program for Pro-Stock and Mini-Stock.

Johnathon Ferguson to the lead in the 100-lap Race for the Cure Sportsman Series in front of Moise Page and Ryan Stabler. Ferguson got into traffic by lap 10 with Page and Stabler. The first caution lap came on lap 17 for Alex Gagnon bringing the field together. Ferguson got a good jump on Page and Brianna Ladouceur in third. Page had a good car using the inside lane as lap traffic played factor, Page used the slower car and passed Ferguson on lap 35. The feature had a great momentum when caution came on lap 47. The battle for lead continued on the following restart as Ferguson regained the lead over Page as Adam Rozon started to make some noise taking third. As the feature got into a good momentum, Page made the inside lane work and regained the lead on Ferguson with 25 laps to go. Page went on to lead the final portion to get his biggest feature win with Ferguson and Rozon completing the top 3.

In the 25-lap Patriot Sprint Tour, Steve Poirier jumped to the lead with Jordan Thomas in second and Jared Zimbardi in third. Poirier quickly got to lap traffic by lap 7 as Mark Smith moved to third. Poirier maneuvered well in traffic as the first caution came on lap 17 for Sean Durand who hit the wall in turn 4. Poirier had the quickest car and led the final portion of the event of Thomas and Smith.

Stephane Lebrun took the lead in the 25-lap Alexandria Home Hardware Pro-Stock as a pair of Dave’s took second and third spot with Bissonnette and Seguin respectively. Yellow is out for Richard Courchesne on lap 9. On the restart, Lebrun had Bissonnette as a dancing partner with both running side by side. Lebrun kept the lead but Bissonnette charged back with 5 to go and grabbed the lead for good to win his second feature of the season over Marc Lalonde and Lebrun


In the 15-lap Assist2Sell Mini-Stock, Justin Jodoin jumped to the lead in front of Mike Gaucher but slowed down on a lap 2 caution and headed to the pits giving the lead to Gaucher. A lot of movement behind Gaucher with Chris James and newcomer Hayden Brown in battle for the runner up position. Gaucher led the final laps and won his first feature of the season.

The Pro-Stock will have a special race next week with the Sisters for a Cure 50, a 50-lap fundraiser race along with a full program!