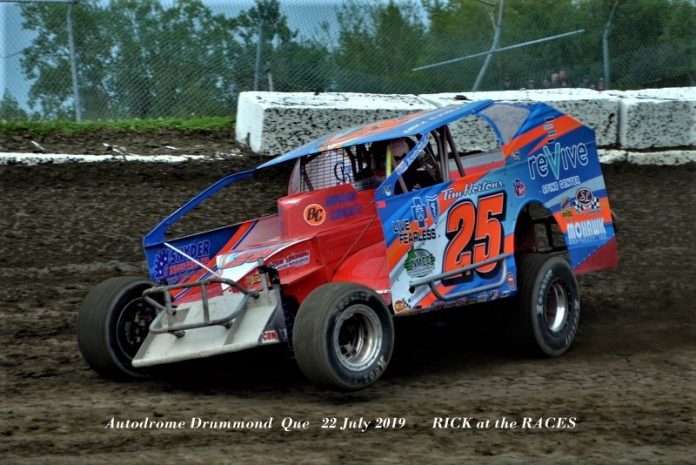 DRUMMONDVILLE, QUE – The winning driver was anyone’s guess throughout the entire 100 laps of action at Autodrome Drummond but Erick Rudolph from Ransomville, NY saved his best stuff for last. Runner-up and NASCAR Gander Outdoors Truck Series standout Stewart Friesen led the most laps but not the one that counted for the win. HBR’s Jimmy Phelps started on the pole position and stayed in the top five all night to cross the finish line on the final step of the podium.

Five years ago, Erick Rudolph burst on the Super DIRTcar Series scene with his first career Series win at Autodrome Drummond. Now, holding his pro wrestling style Championship Belt, Rudolph beamed in Victory Lane, “The track was a pleasure to race on. I had a lot of fun out there. Drummond has always been good to me.”

He may have been having fun out there but Rudolph exercised significant patience in order to save his tires for the end. The top five had a revolving door but the No. 25R stayed in the mix for 80 laps. Then, on the restart with 20 laps to go, Rudolph turned up the dial and outdueled Stewart Friesen for first place.

Rudolph noted, “Early on we were just a fifth-place car or so. As the race went on, the car came to me a little bit. The track started coming to my liking as well.”

All the stars were aligned for Rudolph. His tires were right, his racing lines were right, and it was five years ago to the day that he won his first Series race at Autodrome Drummond.

Multi-discipline racer Stewart Friesen made the trek North for both rounds of the Quebec doubleheader. Friesen started sixth. The No. 44 was fast in clean air and built a lead up during a long mid-race green flag period. Unfortunately, Friesen used up his tires in the early going and had a difficult time matching Rudolph’s late-race pace.

Friesen was excited to race in front of his home country’s fans. “Thanks to everybody for coming out and supporting this event. This is awesome,” he said looking out at the standing room only crowd.

“Drummond is probably one of the most challenging race tracks I’ve ever raced on. It’s very technical and very hard to hit marks. We were good for three-quarters of the race but we lost the tires and the handle there at the end,” Friesen commented. Friesen continued, “Happy to come up here and have a second-place run. It’s not a win but it’s close and we can build on our notebook for the next time we come.”

Polesitter Jimmy Phelps had a fast race car but Rudolph and Friesen“Congrats to Erick, Charlie, and the whole group over there. Those guys are working hard and they are on their game right now.”

Phelps had a perfect view of the battle for first place.

“It looked like the No. 9s was going to come in and make it interesting. It looked like Friesen started to get a little free. I know I was starting to get loose about halfway. We were too good too early. We’ve kind of struggled here over the last few years so all-in-all if I can get out of here with a podium, I’m happy.”

As the field’s tires began to wear out late in the race, Canadian hero David Herbert charged to the front of the field. He picked up sixteen positions from his twenty-first place starting position to finish fifth. David Herbert is the KSE Hard-Charger Award winner for Autodrome Drummond.

Peter Britten picked the not-so-lucky twelfth place starting position in the Redraw, so Hoosier Racing Tire kicked in a free tire for his trouble.

Race-winner Erick Rudolph picked up his career first Billy Whittaker Cars Fast-Time Award. The No. 25R was fast off the trailer and fast right back into it.

Next up the Series is right back in action with another 100-lap Feature at Autodrome Granby.