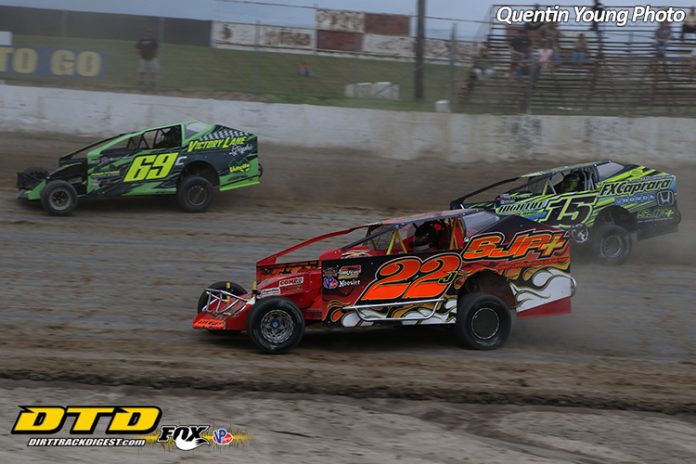 A few weeks ago Modified fans who don’t follow the Fulton Speedway might have asked, “Who the heck is Jeremy Dygert?” after the rookie captured his first feature event.

There use to be a question, “Where are big-block drivers of tomorrow coming from?”

Well, that has changed.

In Central New York, with the ever increasing cost of big-blocks and the implementation of the 358 class at the Fulton Speedway the question seems to appear, “Who will be the new drivers in the 358 division?”


A year ago the small-blocks were incorporated into the weekly show and the much beloved big-blocks were relegated to one night only between the Brewerton and Fulton Speedways.

This year either Larry Wight or a rookie has won at the Fulton Speedway with Dave Marcuccilli snapping a Lightening win streak and then two weeks ago another upstart from the Sportsman division, Jeremy Dygert, made the run to the checkered flag as he pulled off a surprise.

This achievement was well beyond the goals of the Baldwinsville, N.Y., driver.

He had just six 358 races at Fulton entering the July 6 racing action. Jeremy didn’t have any top ten finishes. So the outcome of the night had to produce one of the surprise runs of the season.

Dygert had run Novice Sportsman back 11 years ago at Albany-Saratoga, but he now finds himself in Central New York.

Former owner of Champlain Valley Specialty Company, he said, “We sold our business in Keeseville and relocated in Oswego. We produce sliced apples for places like McDonald’s and such.”

He got the itch to go back racing and noted, “In ‘13 I had a Novice Sportsman and a year later went to the regular Sportsman class. The fields were crowded and I was beating up equipment so we took a year off.”

Continuing he said, “We made the switch to the 358 class to get back into racing. It was a natural progression. I set goals and wanted to eventually be a solid top ten, stay out of the way and not get anyone mad at me.”

He purchased “the complete package,” a former Pat Ward ride that was competitive last year and a Kevlar motor.

One of his goals wasn’t winning a feature event.

Reflecting on the run to the checkered flag Jeremy said, “Winning was not in my mind. We were at the Thursday 358 Series show and crew chief Dan O’Neal made some changes. I knew the car was on, but I just blew it. I was in third place in a qualifying position and hit the cushion and in the second last chance race I hit the wall. However, I thought we had found something.”

Continuing he said, “We came back Saturday night and I thought I shouldn’t waste time. When I went into the first turn I knew the car was good in the middle. After the first caution the restart was the test. I got a good one, held on and began to pull away. I was all alone and I couldn’t hear anyone. My lap times were a carbon copy of one another and I was able to hit my marks lap after lap. The track was dry and slick, but this win still hasn’t sunk in yet. I am thankful to be able to race against drivers like Todd Root, Ronnie Davis III, Pat Ward, Larry Wight and others. To be out there is just so much fun.”

However, there is also one more thing that Jeremy really wants as he said, “I still don’t have a nickname yet.”

Well, the nickname might be elusive, but that first Modified feature win certainly came quicker than he had ever dreamed.