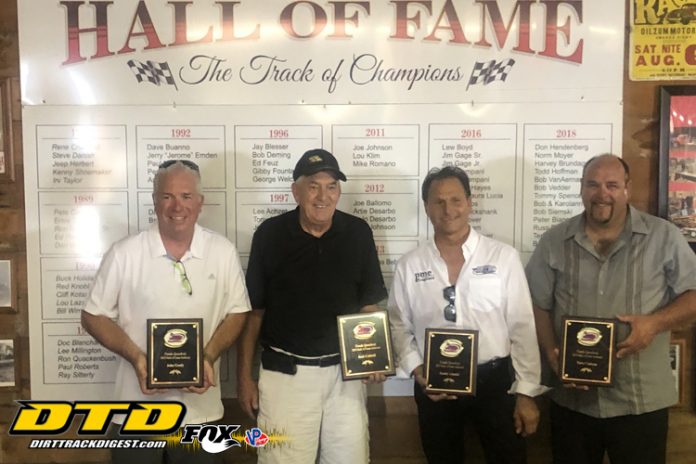 It was difficult getting out of the air conditioned car when we arrived at Albany-Saratoga but being diehard fans we joined the other diehard fans and brave the heat that had ascended on the Northeast.

Our first stop was to talk with Rocky Warner and give him an update on the progress we are making on researching his win records.  We are currently at 140 and still looking for the first ten years of his racing career. Secondly we stopped by the Pro Stock of Brian Carter, CEO of World Racing Group but on this night he was just another racer in a 19-car field of Pro Stocks.  On Friday he had brought some excellent help with him.  Gina Fernez is no stranger to those of us who frequent DIRTcar events, she is especially very helpful to everyone in October at Super DIRT Week in Oswego.  Gina seemed to help Brian in his heat race but when it came to feature time the car started to overheat. He decided not to run the feature and harm the new engine because he planned to go to Lebanon Valley the next night and hoped things would go better.  We shot this photo of Gina with Peter Britten who has become a familiar face in Albany Saratoga victory lane the past seven years.  Peter came to Albany Saratoga in 2013 and since then has had at least one win each season totaling nine wins and one championship at the “Great Race Place.”

Ronnie Johnson of Duanesburg picked up the Modified feature win.  Ronnie started in seventh and wasted no time clicking off cars with his brand new car that his sponsors and crew worked all week to put together.  Marc Johnson was close behind RJ doing all he could to have a Johnson in victory lane, but not Ronnie.  The win put Ronnie tied for sixth with Donnie Ackner on the win list at the track with 29.  Ronnie Johnson has won at many area tracks including Accord in Ulster County, Fonda, Lebanon Valley and Utica Rome amassing a total 70 Modified checkered flags.  As a third generation driver R. J. is certainly doing the family name proud. The Fonda Speedway Museum held their induction ceremonies on Saturday and many people braved the extremely hot weather to attend and celebrate those honored. Dave Camara currently has four children and is heavily involved in his kids sports, baseball and football.  His two youngest don’t know anything about Dave’s racing years so Saturday was a real eye opener for them. Randy Glenski lives in N. C. where he still works in the excavating business.  On Saturday he came to the Hall of Fame ceremonies just as he came to all of his racing events, totally prepared. On Saturday Glenski brought driver cards to autograph for all the fans.  The “All American Kid” is still visibly part of Randy’s personality.  Here he is with fellow Hall of Fame member, Dick Schoonover.

Jack Cottrell was always a family man and retirement gives him more time to spend with his amazing family.  Of course Jack is still at the races many times during the season when he can be because his son Jimmy races at Albany Saratoga on occasion. There has been a Mortensen racing at Fonda since 2003 and now there are two.  Before the rain out on Saturday we shot this photo of brothers Mark and Brett getting ready for the nights racing.  This is Brett’s first year of racing in the Limited Sportsman division at the track, he normally races on ice in the winter.  Brett and Mark both began their racing careers in go carts and their racing efforts have always included family.  Brett was part of Mark’s pit crew until this year and is well aware of the hard work and money it takes to field a car on a weekly basis.  It takes many sponsors and both Mark and Brett have several.  Just this past week they both spent time at Jumpin Jack’s Drive Inn in Scotia one of Mark’s long time sponsors.  Mark Lansing owner of the popular eating place has been a sponsor of Mark’s racing efforts since go carts.  Mark is married and has a 1-1/2 year old son.  Brett is not married.  Both young men have been racing since they were very young and know the ups and downs that can come in racing but with their family solidly behind them it makes things easier. Jim Introne, Jr., is in racing because of his father, Jim, Sr., and when we met him at Utica Rome a couple weeks ago it was his first time at the track and he was loving it.  Jim’s father raced for 25 years so it was only natural that he was bitten by the racing bug, they ran against each other the first two years.  Jim, Jr., was one of the 18 Modified racers that came to the Vernon oval on Friday night that week as the additional class with the Tony Stewart All Star Circuit of Champions. Introne was running a backup motor, a true 358.  Jim, Jr., has been racing northeast tracks for nine or ten years and is traveling this year.  He was a regular at Afton and Glen Ridge last season and when the season rolled around this year he decided to travel and see different tracks.  His wife, father and sister were with him at Utica Rome and he finished out of the top ten and the car was in one piece and that’s usually what most racers hope for; a finish and no damage.