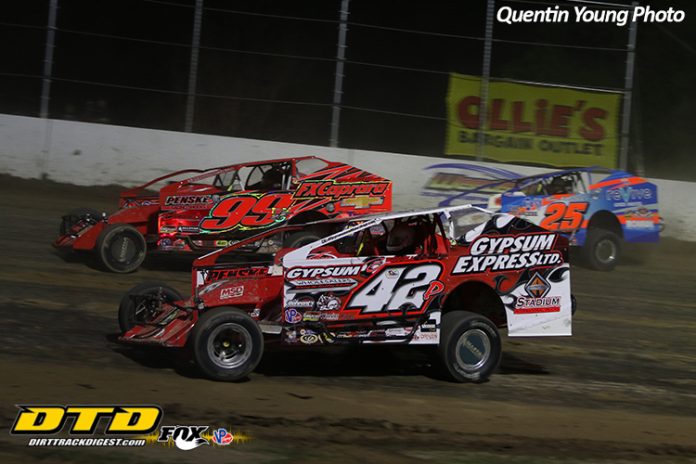 WEEDSPORT, NY – Weedsport Speedway’s Hall of Fame Weekend will provide two days of racing action on Saturday, July 27 and Sunday, July 28 as both the kartway and speedway will be in action.

Racing will kick-off on Saturday at 2 p.m. with Round #3 of the Performance Manufacturing Super Kart Series presented by Stirling Lubricants and Champion Racing Oil at Weedsport Kartway.

Spectator seating in the kartway’s front stretch grandstands is free while non-competitor pit passes are also available for $20.


The following evening Weedsport Speedway returns to action with the Hall of Fame 100 for the Super DIRTcar Series Big Blocks, paying $10,000 to win.

Pit gates will open on July 28 at 4 p.m. with grandstand gates opening at 5 p.m. Racing will start for the evening at 7 p.m.

Reserved camping is still available for $30 per night. General camping is $24 per night.
About Weedsport Speedway: Officially opened for the first time on July 24, 1955 – the Weedsport Speedway 3/8 mile dirt oval has produced a legendary list of drivers and champions including Will Cagle, Danny Johnson, Bob McCreadie, Alan Johnson, Jack Johnson, and Dave Lape to name a few. In 2018, Weedsport introduced the all-new Weedsport Kartway, just outside of the Speedway’s main pit area, to begin to foster the next generation of racers, crew members and race fans. Together, Weedsport Speedway and Kartway are excited to bring fans and followers a schedule of 15 racing events in 2019, hosting everything from Karts and Sprint Cars, to Late Models and Modifieds, Pro Stocks and Micro Sprints, even Flat Track Motorcycles. Couple the racing with state-of-the-art camping and track amenities, unmatched on-site television production capabilities, plus the ability for large scale concert productions and Weedsport is one of the marquee entertainment venues in the country.