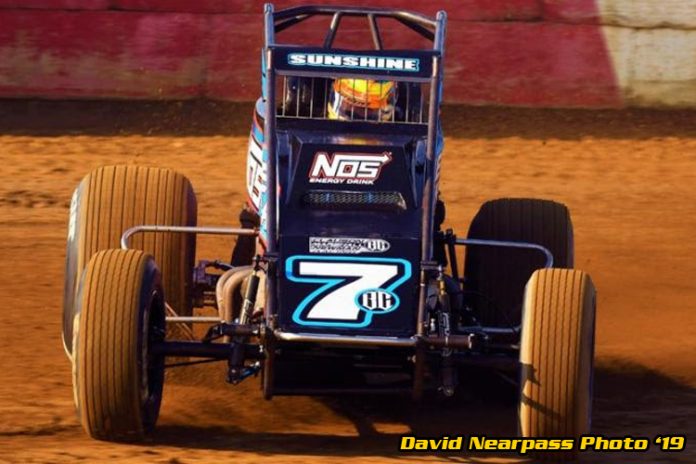 TERRE HAUTE, IN – Tyler Courtney’s roller coaster ride of a week can just about be summed up by his eventful 30-lap adventure during Wednesday’s NOS Energy Drink Indiana Sprint Week round five at the Terre Haute Action Track.

During his pursuit of race leader Justin Grant on a restart with 14 laps remaining, Courtney drove around the outside of Grant and held a slight advantage heading into turn three. Grant fought back on the inside where the two banged wheels, popping Courtney airborne at the exit of turn four.

Amazingly enough, Courtney lost very little ground once he landed on all fours. With no time to waste, Courtney got back on the gas and went for broke on the bottom a straightaway later in turn one, biking the car and showing the belly pan to the crowd before coming back down to earth, somehow, someway, avoiding the outside concrete wall as he blasted it with dirt-filled rooster tails. All this without losing a single spot.

Two near calamities that could’ve taken its toll on Courtney were quickly rebounded from. And there he was once again in a position to win eight laps from the end, lining Grant up in his crosshairs off turn four and sliding past in turn one with mere inches to spare from his rear bumper to Grant’s nose.

From there, Courtney spurted away for a near full straightaway victory, becoming the first driver in USAC National competition this year to collect the Saldana Racing Products “Clean Sweep” with fast qualifying time, a heat race win and a feature victory all in one night. It’s another peak in a week for the Indianapolis, Ind. native that’s had its share of valleys.

Exactly one week earlier, Courtney began a stretch of nine USAC AMSOIL National Sprint Car races in an 11-day span with a win at Eldora, followed by being collected in a crash that resulted in a DNF and a 23rd place finish in the ISW opener at Gas City. The night after that, he was back in victory lane at Plymouth. Saturday at Kokomo was a mid-pack ninth place finish followed up with a crash at Lawrenceburg that the team managed to return to and carve out a 10th place finish.

Courtney takes it all in stride as part of the travails, trials and tribulations of auto racing. To keep it together over a stretch of the season, or throughout a single 30-lap race, isn’t an easy thing to accomplish, especially when you’re involved in two near-catastrophic events that could’ve served as yet another deep valley to climb out of. Instead, it resulted in him becoming the first two-time winner of ISW in 2019.

“That’s racing, with the highs and lows,” Courtney deadpanned. “Although, we might be tied in highs and lows with our week now. It’s a good rebound from the kind of lackluster second part of last week that we had. We know we’re good at tracks like this, so we’ve got to take advantage of it.”

Courtney started sixth and was in third by the end of lap one. Pole sitter Chris Windom led the opening lap on the bottom, but Lawrenceburg ISW winner Grant was on the pursuit and snagged the lead from Windom on the back straightaway on the second lap.

Following a yellow for the stopped car of Tom Harris, on the lap three restart, Courtney got underneath Windom in turn and was shot out of a cannon down the back straight into the second position behind Grant. Grant occupied the middle line as the cushion gradually began to push wider where he maintained a three-quarters of a second lead for much of the of the first half of the 30-lapper until reaching lapped traffic just before the halfway point.

Courtney was able to pull even with Grant on the back straight, but Grant was able to maintain, splitting between the lapped cars of Nate McMillin and Dustin Christie in turn three on lap 15 with Courtney just behind. On the 16th lap, Courtney showed a nose to the outside of Grant midway down the back straightaway. As Grant weaved his way through the forest of machinery, he and Courtney nearly made contact.

A lap later, and still trailing by just a few car lengths, Courtney nearly found trouble in turn one, making slight contact with the slowing car of Isaac Chapple, costing him valuable time and track position. He regained it all less than a lap later as leading series Rookie Brian VanMeveren stopped at the exit of turn four to bring out the caution.

Once reracked, that’s where it initially looked like Courtney had made the deciding move, taking command and driving around Grant in turn two. Grant fought back heading into turn three where the two made contact. Courtney became airborne at the exit of turn four, but both continued on. Courtney remained right within striking distance and set up for a slider into one, but, instead, just about dumped it, somehow avoiding the mishap and wall contact to race onward.

“You want to win these races as badly as he does,” Courtney explained. “But you don’t want to do anything dumb at the same time. Unfortunately, I almost did something dumb and about cost myself the whole race.”

Moments later, May Terre Haute winner and sixth-running Chase Stockon slowed on the back straightaway. Courtney used the opportunity to take a breath and regroup. Initially, Grant commanded the restart while Windom jumped back in to challenge Courtney for second until eighth-place Jason McDougal slowed on the backstretch to bring out the night’s final caution.

Once racing resumed, Courtney was back in the zone, and stayed right with Grant until making the winning move on the 23rd lap with a slide job into turn one. Grant tried a slider of his own on the opposite end in turn three but came up just short. In turn one on lap 24, Grant saw his bid for a win come to a close as he biked himself in turn one, which expanded the gap between the two from three-tenths of a second to near 1.3 sec. in a mere moment’s notice.

“I knew I had been a lot better off of four than he was,” Courtney realized. “So, I made sure I got it good that lap. I knew I couldn’t go too low down in turn one or I’d end up biking again, so I tried to make sure I got a good enough run to where I could get close to him and try to clear him by the middle of the corner and get to the top where I needed to be. Once I got to the lead, I made sure to run as hard as I could to get away from all that.”

By race’s end, Courtney had bumped the advantage to 4.093 seconds, winning by that margin over Grant, Kevin Thomas, Jr., ProSource/KSE Racing Products Hard Charger Brady Bacon (from 14th) and Chris Windom rounding out the top-five.