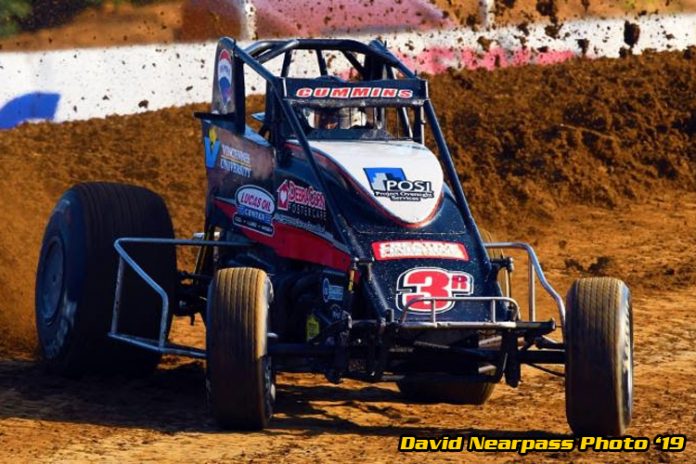 PUTNAMVILLE, IN – On a night when the lights went out around Lincoln Park Speedway, Kyle Cummins was “lights out” in his NOS Energy Drink Indiana Sprint Week round six performance Thursday at the 5/16-mile dirt oval in Putnamville, Ind.

Kyle Cummins led from start to finish, wiring all 30 laps from the pole to win his third career Indiana Sprint Week feature and fourth in the USAC AMSOIL National Sprint Car division, returning to victory lane following a two-year hiatus.

The veteran racer from Princeton, Ind. has a slew of meaningful victories in his career. His first USAC victory at Kokomo in 2016 was a long-awaited breakthrough while his 2017 triumph came in dramatic fashion on a last lap, last corner pass for the win at Tri-State Speedway.

Thursday night’s performance didn’t include quite the same drama that came with the other two on the final laps, yet he freely admits that winning at Lincoln Park is bigger than each of those two, signaling just how far he’d come after a tough 2018 season.


“Kokomo was tough, and Haubstadt was a last lap kind of thing,” Cummins recalled. “I feel like running here, it’s a lot more technical. You can’t just throw it in there and get grip. You’ve got to hit your lines and, if you miss your lines, it can really set you back. Winning here, I feel, is definitely bigger than the other ones I’ve won before. Kokomo was cool because it was the first one and Haubstadt was good, but this one…we kind of had a year there where we just weren’t up there. This year, we got a new car and everywhere we’ve gone, this thing has been really good.”

The evening got off to a peculiar start as, prior to the main event, a transformer blew, knocking out power to several lights around the racetrack. After a delay, the track was lit, and Cummins led the field to the green, wheelstanding his way into turn one with outside front row starter and ISW point leader C.J. Leary to his right on the topside.

Cummins was committed to the lowest of lines even, at moments, kicking up infield dirt as he scratched the surface with his front wheels through the corners.

By lap four, the most competitive battle on the racetrack was for second. Brady Bacon dug his way on the bottom underneath Leary lap-after-lap on both ends of the speedway. Leary utilized a unique line, backing into the turn one curb and cutting a straight, 45-degree angle line toward turn two, keeping Bacon from being able to slide him and allowing himself to carry maximum momentum and drive the shortest distance between two points from turn one to two.

On the 13th lap, Bacon was close enough to push Leary up a tad between turns one and two. Leary lost the momentum and Bacon gained the position of second with Cummins in front of him by six car lengths. One lap later, Isaac Chapple walked away uninjured after flipping atop the cushion between turns three and four while running 22nd.

For Cummins, it was all about repetition from that point onward, getting in a groove and hitting the same exact spot lap-after-lap. But, sometimes, even the slightest change can alter those plans.

“I was slowly moving the shocks, nothing crazy, on the restart there,” Cummins remembered. “I probably untied the shock a little bit too much and got a big ol’ wheelie. When you bounce the front end, you miss your lines, so I just had to be patient and calm and hit my marks.”

Meanwhile, behind Cummins, Leary was able to slip back by under Bacon on the lap 14 restart, momentarily, but Bacon briskly worked his way back around for the spot in three and four while Cummins snapped away to a five-car-length advantage where he would remain for most of the final stretch.

With six laps to go, Bacon was on a scavenger hunt for the raciest line to reel in Cummins. Bacon searched high in turns three and four on lap 24, and the bottom of one, two, three and four on the ensuing trip as the front two encountered lapped traffic.

With Brian VanMeveren low and Jadon Rogers high, Cummins stuck to his guns, never wavered from the bottom and followed VanMeveren before clearing him entering turn three with four to go. Cummins gained some emancipation from Bacon as he dealt with traffic while Cummins frolicked freely from Bacon for the final two laps, scoring the victory by 0.940 sec. over Bacon, Leary, Tyler Courtney and Kevin Thomas, Jr.

Cummins was near perfection on the bottom line although he admits there were times when he thought he might’ve cost himself. With a past two-time champ in Bacon and the current championship leader in Leary on his trail, you can’t be much less than perfect if you’re expecting to win an Indiana Sprint Week feature.

“I felt like they were right on me the whole time,” Cummins explained. “When they said Brady was there, I know he’s good around the bottom. A couple times, I thought I missed the bottom, so I decided I was going to make them have to pass me around the top. If I get tight, I’d just make sure to stay on the bottom. The car was actually fairly loose, which let me kind of get in there and not get tight.”