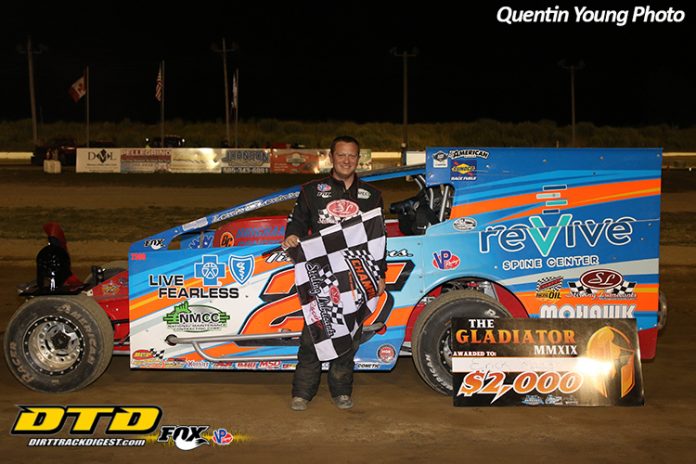 “The car came alive at the end of the race,” Rudolph said. “Early on I was really struggling, but luckily things just kind of worked out. We had a timely caution, and when things fall your way, they just fall your way.”

Ray Bliss and Ryan Susice spent the opening laps of the Modified feature arguing over the lead, but by lap three, Susice had taken sole control of the top spot. After a handful more laps, Bliss surrendered second to Alan Johnson, with Johnson securing the position as lap eight clicked off. By the time Johnson got to second, Susice had already ran away to a full straightaway lead.

Erick Rudolph started eighth on the field and cracked the top five on lap 13 after an extensive battle with Tyler Willard. A couple laps later, Rudolph moved by Bliss for fourth, right before a lap 16 caution for James Sweeting’s spin. This erased Susice’s huge lead, which held steady at a full straightaway after Johnson slid into second.


Susice and Johnson went back to first and second on the restart, while Rudolph got by Billy Van Pelt for third. From there, Susice, Johnson, and Rudolph kept each other in check, with the top three separate by around two seconds by lap 25. Lap 25 is when Susice’s strong run would end, as the leader pulled to a stop in turn four with motor problems, drawing the yellow.

Johnson inherited the lead after Susice’s mechanical issues, and got the jump on Rudolph on the restart. Rudolph wasn’t letting Johnson have any rest, as Rudolph put immediate pressure on Johnson after the lap 25 restart. Johnson kept his car planted in the middle to bottom of the track, while Rudolph looked to both the extreme bottom and far top for a way by.

After some experimenting, Rudolph found a fast lane on the top of turns three and four. Coming to lap 33, Rudolph got a big run off of turn four, crossed over Johnson, and dove under him entering turn one. Rudolph drove it into the turn hard, but it stuck, and Rudolph cleared for the lead.

“In the middle of the race I realized what I was doing wasn’t working, and when that happens you got to go fishing a bit,” commented Rudolph. “Luckily, we found something and were able to get by him.”