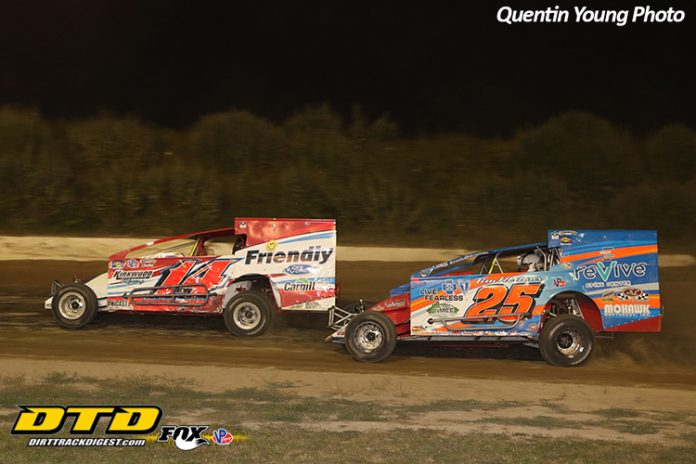 Erick Rudolph continued his winning ways in a special Thursday night program for the Modifieds at the Genesee Speedway.  Rudolph has been on a hot streak in which he’s won a BRP Modified Tour race, a Super DIRTcar Series event as well as a DIRTcar 358-Modified Series race, all within the last two weeks.

Thursday night was the second annual Gladiator at Genesee Speedway featuring a 40-lap, $2,000 to win event.  Like he’s done so much of as of late, Rudolph got to the front to secure the biggest payday in the field.

“Things are really going good,” stated Rudolph.  “Our trip to Canada was great.  This past Sunday we got a win and now a win tonight.  The weekend is still young yet.  I have a lot of confidence right now.  The team has a bunch of confidence.  Confidence is key.”

Rudolph set fast time in qualifying with his Bicknell mount, won his heat but was relegated to the eighth starting spot by virtue of the redraw.  It took him several laps to adjust to the speedway.  Genesee is a track that he has no Modified experience with his only other visit coming in a micro sprint over a decade ago.  As a result, it took him some time to figure out what the car wanted.


“I didn’t have a good feeling about what I should be doing out there,” commented Rudolph.  “I wasn’t sure how to pass.  The track is a little narrow and I don’t have any experience here.  I started first in the heat race so it wasn’t like I knew how to make a pass.  I was trying some different things.  I found some things the car liked.  Then I started picking up the speed a little bit.  It’s a small track so you got to be patient and at the same time when you get a hole you have to fill it.”

Rudolph maneuvered his way forward and made it to third by the time Ryan Susice slowed with mechanical issues on lap 25 while leading.  From there he had to contend with Alan Johnson.  Johnson did all he could to hold Rudolph off.  Finally, on lap 34, Rudolph found an opening as Johnson just missed the bottom in turn one allowing Rudolph to drive underneath him for the lead.  He checked out from there.

“I don’t know what happened to Ryan,” mentioned Rudolph.  “I’m not sure we had anything for him or not, but that’s neither here nor there.   Alan is Alan, he is a legend. I knew it was going to be tough because he knows how to protect a lead, just like anyone that is good knows how to.  He was running his line and I knew where I wanted to be.  It just took a lot of work because I was only a little bit faster than him, not a lot faster.  It took a lot of work, but once I had a hole I jumped on the opportunity.”

Alan Johnson was so close to finally breaking through for a win in 2019.  Johnson’s car was only a tick off, but that was enough for Rudolph to take advantage of him.  He opened the door only a little bit, but that was all Rudolph needed to sneak by.

“He’s been hot all year about everywhere he goes so you can’t complain too much, but we were a little off,” commented Johnson.  “I felt loose right from the beginning and I had a little bit harder left rear tire. I was trying to spin it to get it to come in.  It just didn’t get better like we thought it would.”

Johnson is hopefully that he’ll get the win soon.  He admitted it’s frustrating, but he’ll keep trying.

“We haven’t had any this year,” stated Johnson referring to wins.  “Last year we had a couple by this time.  We actually got better stuff this year so it’s kind of frustrating.  We’ll keep plugging away.”

Tyler Willard finished up the night in the third position behind Rudolph and Johnson with his Competition Engines powered Bicknell.  He was pleased with the outcome considering he struggled a bit adapting to the American Racer Tires.

“I’ve watched Alan (Johnson) since I was kid and Erick is about the best in the Northeast right now,” stated Willard.  “We’ll take a third to them guys any day.  Our car was great.  I got to thank all of our sponsors as we can’t do this without them.  We aren’t a high dollar team.  We put a great piece together, but I think there is something to be learned with the American Racers.  We mostly run Hoosiers.  This is our second or third time on them.  They really fire differently.  It takes some time to get use to it.  I wasn’t driving the car hard enough at the beginning.  We’ll learn, grow and get better from there.”

In 2019 Willard has cut back on his racing travel due the expansion of his family in June.  He was a former regular with the BRP Modified Tour, but now has scaled back to local racing in order to spend more time at home.  He was happy to have a race at Genesee which is an hour and a half from his home in Canada.

“We were following the BRP Tour, but we had a baby in early June so kind of kiboshed the BRP Tour this year,” said the 30-year-old driver.  “We’ve been hitting races we can hit.  I’d like to run Lernerville and that, but we have to work tomorrow.  With the young kids now, we want to keep them busy and have some fun.  We just get out when we can.  Tonight, we got out of work early, and headed down.  It’s only an hour and half.  I like coming here so I wish they had a few more shows.”

In chatting with promotor Phil Vigneri III after the racing event, he indicated it is his desire to bring the race back for a third edition during the 2020 racing season at Genesee…

Group time trials were held with Rudolph recording the fastest lap of the night with a 16.583 in group one and Vigneri III turning a lap of 17.002 in group two.  They went on to win the heat races…

Ryan Susice lost a motor while leading the main-event.  Susice started from the outside of the front row by virtue of a revenge draw.  Rudolph received the eight…

Billy Van Pelt settled for fourth in the Wally Wade No. 82.  Van Pelt has known Wade for several years and is assisting the team with setup in an effort to get improved results for himself, Gary Tomkins and Susice who are all scheduled to drive the car at some point this season.

There were only two cautions in the 40-lap Modified feature.  One for Susice slowing when his engine let go and the other came on lap 10 when James Sweeting got around in turn two…