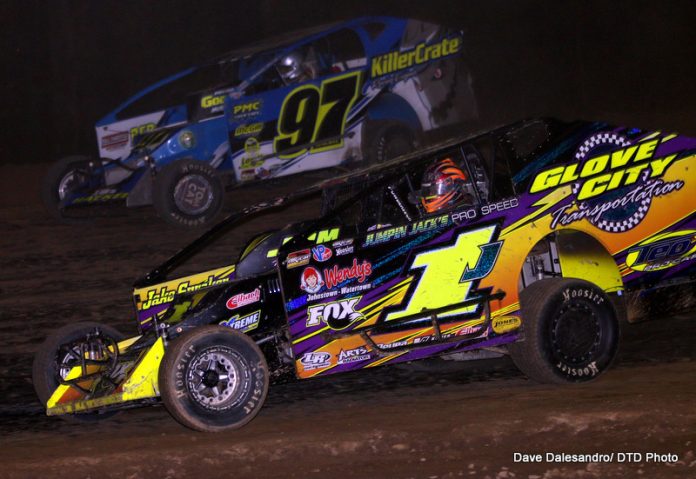 MALTA –There have been times this season when Rocky Warner thought he had one of the fastest modifieds at Albany-Saratoga Speedway.

Friday night wasn’t one of those nights, but when the checkered flag was thrown to end the “Stan Da Man 32,” Warner was in victory lane for the first time as a modified driver.

Warner, the Gloversville driver who wheels the Jake Spraker-owned 1J, rocketed past Bobby Hackel IV with one lap to go and became the 10th different modified winner at “The Great Race Place” this season.

Warner, who won the sportsman championship at Albany-Saratoga in 2017 before moving up to modifieds, picked a perfect time to get his first win, as the “Stan Da Man 32,” a tribute race for Stan DeVore, the late father of Albany-Saratoga promoter Lyle DeVore, paid $3,200 to win.

“I was complaining all night that this was the worst the car has felt all year,” said Warner after his milestone victory. “We were 13th fastest during the last session. But we made a couple of changes and they worked.”


While Warner celebrated his first win, he prevented Hackel from recording the first modified win of his career at the historic Malta track. Hackel started fourth, got the lead on lap two and worked the outside line as well as anyone could.

But when Hackel got into lapped traffic late in the race, Warner, who started eighth, was able to make his move. By lap 22, Warner had caught the second place car of Don Ronca and the next time around, Warner and Ronca came together in the front straightaway, with Warner making a great save to prevent his car from spinning out.

Warner then moved around Ronca for second and with two laps to go, pulled even with Hackel going past starter Rich Peterson. Warner then took the lead coming out of the fourth turn on the white flag lap, and came away with the victory.

“I figured one of the small blocks would be there at the end,” said Hackel. “I backed it down a little bit when I got into the lapped cars, but by that time, my right rear tire was gone, and I couldn’t pick up the pace again.”

The night didn’t go well for some of the division’s previous winners.

On the first lap of the feature, there was contact on the backstretch, Peter Britten was shoved off the racing surface, and his wheels dug in, sending him into a flip. He walked away injured.

On the subsequent restart, Mike Mahaney has something break in his driveline, and rolled to a stop, keeping the caution flag out.

Then, on a restart on lap 13, points leader Marc Johnson and Neil Stratton tangled coming out of the second turn. Johnson’s car appeared to hop over Stratton’s front and, and spun into traffic in the middle of the backstretch. Contact with another car resulted in Johnson winding up on his roof.

Heat race winners each received a $320 bonus from Chris Grady and Bob Novak of Grady Vintage Photos. The bonuses went to Hackel IV, Mahaney and Stratton.

Wagner Fitzgerald started on the outside pole, but needed four laps to get by Marty Kelly III for the lead in the feature, which was run without a caution. Running the top, he left the bottom open for Scott Duell, who was running second by lap 10.

Duell’s bid for the win ended on lap 15, when Elliott Lussier slowed in the second turn. Duell had nowhere to go, and ran into Lussier, allowing Pat Jones and Christopher Ronca to move into the top three.

Ronca eventually got around Jones with two laps to go, but by that time, the 16-year old Wagner Fitzgerald was long gone. Connor Cleveland made a late charge for third, which Jones faded to fifth in the final two laps.

The Native Pride Series Sitting Bull 32-lap pro stock feature turned into a three-car battle between Nick Stone, Brandon Gray and Luke Horning, with Stone notching his first win of the season. On the final lap, Horning nearly took the top three cars out of the race. He tried to squeeze inside Stone in the second turn, but when Stone slammed the door, Horning shot up the track, crossing in front of Gray. Horning gathered his car back in and only lost one spot. The top five consisted of Stone, Gray, Scott Towslee, Horning and Kim Duell.

David Boisclair won the 20-lap Haun Welding limited sportsman feature, which was also his first win of the season. He started on the pole and led every lap of the feature, which was slowed by five cautions. Shane Larman stayed right on Boisclair’s rear bumper for much of the feature but could never build up the momentum to get by Boisclair, who finished with a winning margin of .154 seconds.

Mark Burch picked up his second win of the year in the 15-lap Lake Auto Parts street stock feature. Burch, who started sixth, moved out on the point on lap five and was in control of the race until the final one-lap shootout, caused when contact between Jimmy Duncan and Al Relyea brought out the yellow with one to go. On the restart, John Filarecki took a big run at Burch and the two leaders touched coming out of the second turn, but Burch hung on for the win.

Dave Frame drove to his fifth win of the year in the 15-lap four-cylinder feature. Frame had opened up a big lead, leaving Robert Garney, Steve Ryan and Jim Bleau to battle for second. But that battle took a turn on a restart on lap 11, when Ryan took over second and Garney and Bleau came together in the fourth turn, leaving Garney with a flat right rear tire.

When the checkered flag flew, Frame and Ryan were 1-2, with Corlan Lavoy third, with the first single-cam car across the finish line. Allanna Jordan, also driving a single-cam car, was fourth.