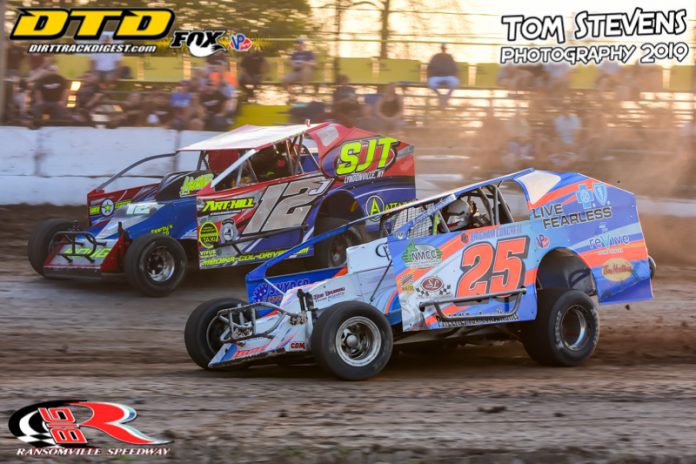 Dave Bailey and Chris Dziomba brought the field of KiPo Chevrolet Street Stocks to the green flag for the 30-lap John Susice Memorial for race two of the Ransomville/New Humberstone Speedway Can-Am Thunder Stock challenge and it was Dziomba showing the way with Bailey challenging back for the lead. Bailey would take the lead away on lap five. Billy Bleich Jr would take second away after a multi-car battle took place for the position for several laps. Pete Stefanski, Cory Sawyer, Pat Dell, and Rob Murray battled for third place as the top two pulled away from the field. Sawyer’s top five run would end at the halfway mark as he pulled into the pit area. Rob Murray would battle with Pete Stefanski for third place for several laps. Dan Korpanty spun in turn four to bring out the races’ first caution on lap 21. On the restart, Bailey, Bleich, Murray, and Stefanski all battled for the lead. Bleich would take the lead on lap 24 with Bailey returning to the lead just one lap later. Bailey would hold off Bleich and Murray to score the win.

Erick Rudolph and Matt Farnham were on the front row for the Krown Undercoating Modifieds feature with Rudolph taking the lead as Mike Bowman challenged Farnham for the second position. Pete Bicknell would enter the top five on lap five after passing Jesse Cotriss and Mat Williamson. Ryan Susice would close in on Bicknell and Williamson, making a four-car battle for the fourth spot as Chad Brachmann held the position. Rudolph would hit lap traffic at the halfway mark, just as Ryan Susice would enter the top five after passing Pete Bicknell. Bowman and Williamson would close in on runner-up runner Matt Farnham with ten laps remaining. Williamson would take third away from Bowman with nine laps remaining. Mike Williams brought out the races’ first caution with eight laps remaining, erasing a 5.9 second lead over the field. On the restart, Williamson would take second away with Mike Bowman moving into third place. Williamson would start to reel in Rudolph in the remaining laps but Rudolph would go on to score his fourth win of the season.

Dave DiPietro and AJ Custodi brought the Investors Service Sportsman to the green flag for their 25-lap feature with DiPietro showing the way. Andrew Smith would take over second on lap two and would pressure DiPietro for the lead. Robbie Johnston and Derek Wagner would battle with Smith for second with Johnston moving into the runner up position on lap eight. Wagner would pass Johnston on lap 11 to take over the second position. Wagner would close in on DiPietro for the lead and would complete the pass on the outside lane with seven laps remaining. Garrison Krentz would battle with DiPietro for second in the and would pass DiPietro with three laps remaining. Wagner would go on to score his second win of the season over Garrison Krentz, Kyle Inman, DiPietro and Robbie Johnston.

Ryan Plante and Cole Susice led the Gippsters Collision Mini Stocks to the green flag for their feature event with Susice jumping into the lead. Dave Dussault would work around Plante to take the runner up position away as Mike Kramarz worked into third place. Kramarz would then get around Dave Dussault to take second away on lap three and would go to chase down race leader Susice. Kramarz would real in Susice coming to two laps to go. Susice would hold off Kramarz to score the win. Plante, Matt Hornquist, and Dussault would complete the top five. Dussault would be disqualified after being light at the scales.

Mark Cerrone Inc. and Certo Brothers will be presenting the racing action on Friday, August 2. A full Ransomville Speedway racing program of Krown Undercoating 358 Modifieds, Investor’s Service Sportsman, Ki Po Motors Street Stocks, Stevenson’s Hardware Novice Sportsman, and the Gippsters Collision Mini Stocks are on the card plus the CanAm Vintage Cars. Pit gates will open at 5 pm with grandstands opening at 6 with racing getting underway at 7:15 pm.