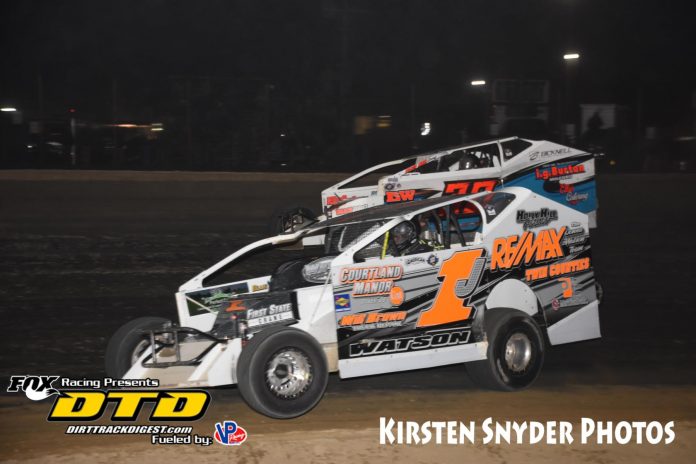 GEORGETOWN, DE – On an historic night at the Georgetown Speedway, Jordan Watson represented his home state of Delaware well.

Watson, who resides just 15 minutes north of the speedway in Milford, ended an absence of nearly three years for First State drivers from Victory Lane in L&J Sheet Metal Modified competition at the historic venue.

Watson picked up $3,250 in prize money for his efforts in the 30-lap main event driving the family fielded No. 1J.

A huge crowd filled the Georgetown grandstands to overflow for Blue Hen Dispose-All Night featuring the first-ever appearance at the track by the Rapid Tire USAC East Coast Sprint Cars.


Reading, Pa.’s Steven Drevicki etched his name in the history books with the inaugural victory in the division’s 25-lap event.

The night began with the dedication of the track’s turn-four grandstands in honor of Delaware driving legend Harold Bunting. Many of Bunting’s family members were in attendance for a ceremony held just prior to the National Anthem.

The L&J Sheet Metal Modified event was led to green by Watson, who had charged from last in his heat race to make the redraw of top qualifiers. Watson was flanked on the front row by Pennsylvania’s Ryan Watt, who had invaded Delaware International Speedway and bested Watson in a back-and-forth battle just weeks earlier.

This time, Watson was having none of it. The No. 1J took off like a rocket.

“We made, what I felt like, was a pretty big change to the car last night in the shop,” Watson said. “This car was awesome.”

Following an early restart, Neshanic Station, N.J.’s, “Sensational” Jimmy Horton went through the middle of Ryan Watt and Delaware local Robert Dutton to climb from the fourth to second.

Anthony Perrego, of Middletown, N.Y., was hard charging in his Gary Simpson owned No. 12k machine. After starting seventh he had climbed to the fourth spot in the early going.

While Watson had gotten away from the field, Horton, Watt, and Perrego fought for the runner-up position while weaving in and out of slower traffic.

Through the lapped cars, Watson never wavered, and was never under duress from the rest of the field.

That was until, a yellow came out for a spin on lap 25, bunching the field back together.

“I was glad to hear Watt was still behind me (on the restart), because I knew that meant nobody was really charging,” Watson said of the late obstacle.

When the green flag flew from starter Joe Kriss, Watson again drove away from Watt and the rest of the field to grab the win in what Jordan called “a win for the Delaware fans.”

Watson received $3,000 from the posted purse and an additional $250 as the top Delaware driver courtesy of Stockley Materials.

Boyertown, Pa.’s Ryan Watt drove the Ron Roberts No. 14W to a $2,000 runner-up finish. Horton guided the Halmar International No. 43 to third, followed by Mike Gular of Boyertown, Pa., from the fifth row, and Jeff Strunk of Boyertown, Pa., who started in Row No. 6 with Glenn Hyneman’s No. 126.

Mr. Mulch put up a $150 bonus to the highest finisher without a win in 2019 that went to fourth-finisher Gular

Anthony Perrego and Brandon Grosso were the heat race winners for the night with 20 Modifieds in the pit area.

Steven Drevicki picked up his fourth series win and extended his point lead in his quest for back-to-back USAC East Coast championships.

Chris Allen Jr. started on the pole and led the race in the early going, holding off Drevicki, along with Chandler Leiby, Timmy Buckwalter, and Joey Biasi.

The only yellow turned to red came on lap five, when Buckwalter and Leiby made contact and sent Buckwalter off the bank and up and over several times in turns three and four.

The field went green checkered for the remaining 20 laps, and put on an outstanding race. After Drevicki got the lead, he pulled away, leaving Leiby, Allen and Eddie Strada to fight amongst themselves for the runner up spot.

When the Sunoco checkered flew Drevicki won his fourth feature event of the season. Chris Allen, Eddie Strada, Chandler Leiby, and Joey Biasi rounded out the top five in that order.

The Chesapeake Paving/J.W. Brown Trucking 602 Crate Sportsman rounded out the program with Dagsboro, Del.’s Scott Hitchens continuing his dominance in the division at Georgetown.

After starting eighth, Hitchens was to fourth at the midpoint. Following a yellow, Hitchens took advantage of the restart. He grabbed the lead and never looked back.

FRIDAY NOTES: Event sponsor Blue Hen Dispose-All of Millsboro, Del., brought nearly 70 representatives to the event and set up an impressive display that included several pieces of the company’s equipment in the grandstand area….

A total of 106 race cars filled the Georgetown pit area….

Did Not Start: Shawn Ward.