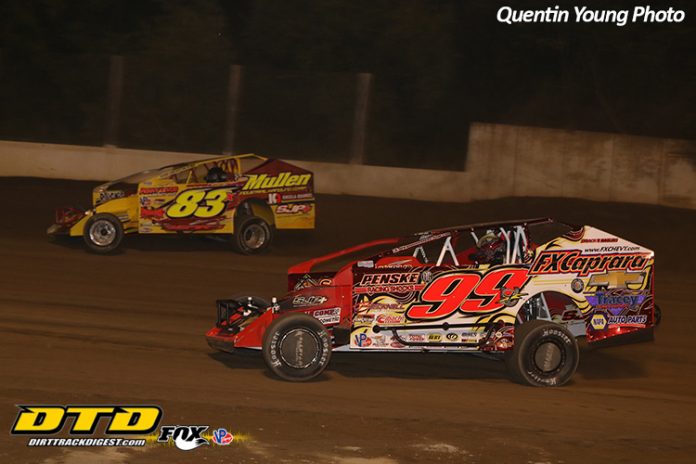 BREWERTON, NY – Larry Wight grabbed his first Brewerton win of the season, dominating the second half of the 35-lap Big Block Modified main.

“It’s been a long time coming, we’ve been close quite a few times this year but always seemed to be runner up,” Wight said. “We had a little slump there, but hopefully we got everything worked out and we’ll be back at par.

Polesitter Nick Krause had an awful start, slowing to a halt on the opening lap. The first lap did get scored before the caution waived, and in that opening circuit, Larry Wight flew from ninth to fourth. Tyler Trump took the lead when the race restarted, with Wight slotting into second.

Following right behind Wight was Tim Sears Jr., who got to third soon after the restart. Up front, Wight went low to try and get by Trump for the lead, but Sears took advantage of the vacated top and stole second from Wight. Just after clearing Wight on lap five, Sears switched lanes to the bottom and tried the same move Wight did, which handed second right back to Wight.


By lap 12, Trump and Wight had distanced themselves from third place Andrew Ferguson, who rode the top by Sears just prior. After many laps of searching down low, Wight finally got the run he needed to drive by Trump to lead lap 17, and wasted little time building up a big lead.

“Tyler Trump was real good up top keeping his small block wound up,” cited Wight.  “I tried to get a jump on him there early, but gave up second to Sears. He tried the same thing we did and we got it right back.”

As the race hit lap 25, Wight’s lead had grown to over a straightaway. Trump was comfortably in second, while Ferguson, Ronnie Davis III, and Sears fought over third. Wight finally had to break his cruise control as teammate Pat Ward broke with just two laps to go, drawing a yellow.

Wight wasn’t fazed by the lap 33 yellow and restart, driving away for his first win of the year at the track.

Behind him, Sears used both the top and bottom to get from fifth to second, with Trump and Ferguson finishing third and fourth. Billy Decker got by Davis at the line to grab fifth.