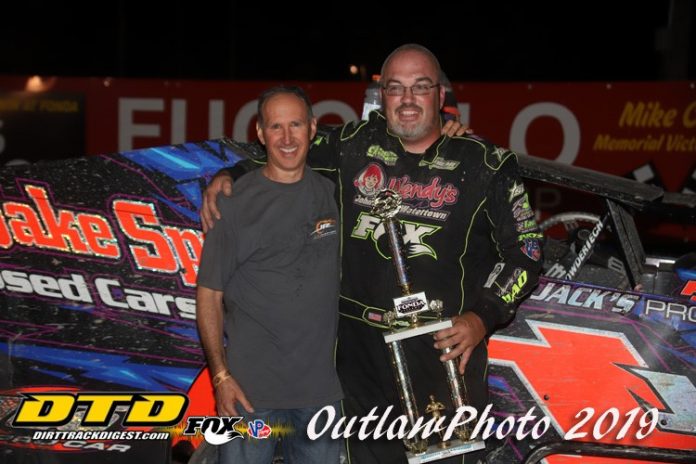 FONDA, NY – If ever there were a driver that was having the proverbial ‘pinch me I must be dreaming’ moment, Rocky Warner is certainly it thus far in the 2019 season.

With four victories to his credit at the historic Fonda Speedway [in Fonda N.Y.] already this year, and the point lead in the division heading into Saturday night’s racing program, one would be hard-pressed to find a way to pad the stats even further.

Needless to say, Warner turned the heat up on the competition again with a seemingly season-defining last lap, last corner pass on then race leader Josh Hohenforst to steal away the victory in the 30-lap contest at the Montgomery county oval Saturday night.

What’s more impressive is the manner in which his latest tally was accomplished.

With a tenth place starting position on the grid, Warner already had the deck stacked against him. Add to that the fact that the feature went caution-free and the odds should have been improbable at best.

Scott Huber and Brian Pessolano brought the field to the initial green flag with Huber quickly grabbing the top-spot by the end of lap one and pulling away to a fairly sizeable advantage over the rest of the field in quick order.

However, Huber’s lead was short-lived as the No. 6H of Hohenforst slid his DKM Chassis into the lead at the completion of the third circuit with a blistering move through turns three and four. To say he stretched out his advantage is an understatement as by the midway point of the main event, Hohenforst – for all intents and purposes – was in a completely different zip code.

Little by little, the driver of the Jake Spraker owned No. 1J started cutting into Hohenforst’s lead and by the time there was only a mere handful of circuits remaining, the top three of Hohenforst, Warner and Friesen were in a venerable dogfight in the midst of lapped traffic.

With the Halmar sponsored No. 44 all over his rear bumper, Warner looked high and low trying to find a way around the No. 6H to no avail; until the final corner on the final lap that is.

Warner found the right amount of forward drive needed to out-power Hohenforst to the line in what became yet another instant classic for the Fonda Speedway faithful.

Friesen, David Schilling and Scott Huber rounded out the top-five.

“There’s not much to say at this point honestly,” said Warner after his victory Saturday night. “The way this year has gone is amazing and I’m actually just kind of numb to it really. It’s crazy, it really is. Winning last night at Malta [Albany-Saratoga Speedway in Malta, N.Y.] and then to win one on the last-lap like tonight is unreal. It’s nice to start up front and run away with one but it just means so much more to win one with a last-lap pass like we did tonight. It’s just a great feeling.”

Though the beginning of the night seemed slightly below his standards with a third-place result in his qualifying event, Warner never faltered having proven that when it comes to winning at Fonda in 2019, he has quickly become the man that his contemporaries seem to be constantly chasing rather than the other way around.

“We didn’t really make many changes between the heat race and the feature,” Warner continued. “We were hemming and hawing trying to make a decision but I knew that I had to stay freed up if it was tacky or if it got too slick. A lot of guys will over-tighten the car and I knew that we couldn’t do that. We were actually a tick tight a few times during the feature but we have a real hot rod this year and we definitely showed that tonight.”

Sometimes races are marathons and conversely, at other times, they can be more related to a sprint. Saturday night’s feature event was certainly the latter of the two and coming from the fifth row certainly would have made a caution or two a welcome sight. Time, more so than anything, was the enemy for Warner.

“I thought Huber was leading honestly,” He explained. “When I got to him, I thought he had a big lead when I got to what I thought was second. When I passed him, I saw some yellow up in front of me and I realized that must be Hohenforst out front so we kept digging.”

It’s a good thing he did as the familiar – and slightly feared – No. 44 of Stewart Friesen was chasing him down in quick order.

“Then I heard what I thought sounded like another car right next to me,” said Warner. “I didn’t know if it was my exhaust or my earbuds or something else but thankfully, I kept on charging hard because Stew [Friesen] was right on us. Whenever Stewie’s in the field and you can finish in front of him, it means a lot. I’m not bragging because I know where that gets you but I have a lot of respect for what he’s doing for our sport in the northeast right now so to get a win over him is a big deal.”

Whether Rocky Warner realizes it or not, he already has a Hall of Fame caliber career going for him where Fonda Speedway is concerned and though he’s not one to put the cart before the horse nor is he one to jump to any conclusions by any means, he’s on the verge of completing a feat that literally nobody else has ever done at Fonda; win a title in all of the four main divisions.

With track championships already earned in the street-stock, pro-stock and sportsman classes, the modified title is certainly within reach. There’s only one person that could mathematically put a damper on his chances; seven-time track champion Bobby Varin.

“I’ve thought about that but you just can’t take Bobby Varin lightly,” concluded Warner. “That guy is an animal. He does amazing things behind the wheel of a race car so you can’t take him lightly and you can’t sit back and rest on a point lead over him because it doesn’t matter with that guy. If there’s a rabbit to pull out of a hat, he’ll do it and get to the front when he needs to. We know we have to beat him and keep getting to the front and that’s what we’re going to try to do.”

For Hall of Fame car-owner Jake Spraker, this season has certainly been a pleasant surprise to say the least. After all he’s accomplished in dirt modified racing, the drive to win is as present as ever and Saturday night’s triumph was more than enough to put a smile on his face.

“Did I think we’d have a season like this? Hell no.” Spraker said with a smile. “Night’s like this make it all worth it. It was an awesome run and Rocky ran an awesome race; he never gave up and that’s what we came out to do this year.”

There was some uncertainty as to whether or not Spraker would field a modified this season and hindsight being what it is, it has become crystal clear that his decision to do so has paid off in a way that many of his contemporaries could only dream of.

“We didn’t know if we were going to go crate racing or modified racing,” concluded Spraker. “I couldn’t sell the motors for the modified program so I said to hell with it, we’ll go modified racing. It turned out to be a pretty good decision. I’m happy, Rocky’s happy, I’m not sure our competitors are happy but we’re having fun and doing what we set out to do. That’s all you can ask for.”