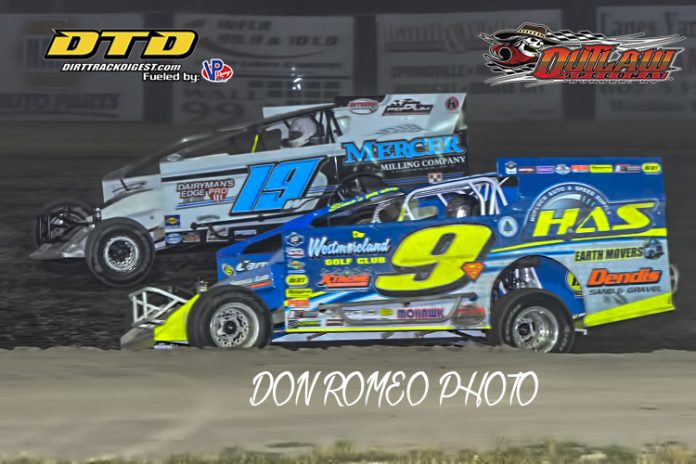 DUNDEE, NY – Night two of the A. Verdi Storage Containers Annual Summer Nationals at the Outlaw Speedway played up to all the hype as a packed pit area awaited the capacity crowd that was on hand.

The 360 Sprints, under the direction of the A. Verdi Storage Container sponsored Patriot Sprint Tour was out in full force with many of the top name pilots in the northeast. In an A Main event that saw no yellow flags and was clicked off in just 8 minutes and 46 seconds, Dylan Westbrook took full advantage of his pole position starting spot on the grid and cruised to the popular victory. Paulie Colagiovanni, who has shown previous signs of improvement at Outlaw Speedway, rode home for second from his third row starting position along with Jordan Thomas who finished third. Multiple time 360 Sprint Car feature winner at Outlaw, Jared Zimbardi started in the fourth row, drove a steady race and without the help of any cautions came home for fourth at the finish followed across the line by Joe Trenca.

For a more concise wrap up of the 360 Sprint activities on this night of action at Outlaw Speedway simply go to www.patriotsprinttour.com.

In the Friendly Chrysler, Dodge, Jeep, Ram Modified Division Matt Sheppard opted to skip Friday Nights Modified Dash which locked the front row for tonight’s feature action, however the 2017 Outlaw Speedway Track Champion only needed a few laps to get into the top spot from his outside fourth row starting position in the 30 lap feature. Derek Podsaidlo and Eldon Payne Jr. brought the field to the opening green flag as they were guaranteed front row start spots from the previous night’s Dash. However it didn’t take long for Sheppard to assume the top spot and once in the lead, Super Matt put his potent 9s into overdrive and rode away to his 8th feature win in 2019 at the Yates County Oval. AJ Slideways, Alan Johnson started two rows behind Sheppard on the grid and put on one of his masterful drives to claim the runner up position at the finish. Kyle Coffey continues to run with the upper echelon in the sport as he brought the Sweeteners Plus car home for a top three podium finish. Outlaw Speedway regular, Justin Wright was a picture of consistency starting in the sixth spot and claiming fourth at the checkers chased across the line by Podsaidlo who had perhaps his best finish of the 2019 campaign rounding out the top five.

The Sunrise Insulation American Racer Tire Outlaw Speedway 602 Crate Sportsman event was series race 3 on the year and with a much needed win under his belt the night before, 2017 Track Champ, Karl Comfort looked to sweep the weekend. Starting outside pole for the 30 lap feature, Comfort again looked like the man to beat, leading till the half way mark before a flat tire ended his drive. From that point on, Kenny Hammond took over the lead and went on to win his first feature event of “19”. Hammond, who competes full time at the Thunder Mountain Speedway focuses his attention only on the American Racer Tire Series Events at Outlaw Speedway and generally speaking is not a weekly competitor, but he has enough experience on the fast 4/10 of a mile clay oval and it paid off on this night as he brought his beautiful #30 creation home for the popular win and the $1500 that went along with it. Will Shields capped off a great Summer Nationals weekend at Outlaw by once again grabbing the runner up position as he did the night previous. Likewise, Steve Gray, last year’s track champ Chris Fisher and Tommy Collins Jr. who wound up finishing third thru fifth also had solid Summer Nationals with top finishes both nights.

Heat wins were claimed by Hammond, Gray and Comfort.

The Stan’s No Tubes Street Stock Division has been nothing short of a brawl between Dylan Cecce defending champ, Glen Whritenour. Only two other drivers in Axsel Jensen and Jake Karlnoski have been able to keep Cecce and GW out of victory lane thus far. Having mechanical issues on Friday Night of this year’s Summer Nationals, Cecce was able to start in the front row for the Saturday night event as he and Jared Hill brought the nineteen car field to the opening green. Cecce was able to capitalize on his up front starting spot and went on to pick up his 6th feature event of the season. For Whritenour it was a bit tougher as the veteran competitor was mired mid pack on the opening green, however he sliced his way thru traffic and ended up in the runner up spot at the finish followed across the line by the other top three man in the current points, CJ Guererri. Chuck Winslow capped off a great weekend by finishing fourth chased across the line by Jared Hill who rounded the top five.

In the Marion Decker Insurance IMCA Modifieds Brandon Smith was able to power his way from his fifth row starting position and pick-up the win. It was the second trip to victory lane in 2019 for the second generation pilot who drives a machine with MOPAR power under the hood and with the win gives the team momentum heading into the final month of competition at the track. Tyler Stoddard followed Smith across the finish line for second with Bad Brad Smith in third. Outlaw Speedway non track regular, Matt Roberts drove a steady race to finish fifth as veteran driver, Ray McClure rounded the top five.

Marion Decker Insurance also sponsors the Hobby Stock Division as an even dozen machines took the opening green flag in their feature event. Casey Wagner had not picked up a feature in at the track since June 7, however he was not to be denied on this night as he powered past pole sitter Tyler Burnell and never looked back in route to feature win number two of the season. Anthony Guererri bettered his original starting position by one finishing in the runner up spot chased across the line by Eric Williams, Kenny Hunt and five time feature winner thus far, Wayne Ellison who finished fifth.

Wagner capped off a perfect night by also winning his heat race along with Ellison who claimed the other Hobby Stock heat race qualifier.

Last but certainly not least the Mighty 4 Cylinders ran their feature event and the biggest question mark was could anyone stop the Adam Austin seven race win streak. The second generation pilot has owned the class for the past two months and after a sluggish start has taken control and with his win on night one of the Summer Nationals, Austin was the odds on favorite to sweep the weekend. However, that was not the case as he encountered problems and finished will back in the field. That left the door wide open for Scott Lehman Jr. to nail down his second feature win of the year. Jeremy Bunn continues to show signs of steady improvement and after a solid top five the night before, Bunn came home for a well-deserved second place finish. Like his son, Scott Lehman Sr. also had a great weekend as he finished third behind Lehman Jr. and Bunn. 2017 class champion, Mike Stone suffered thru mechanical issues on Friday but bounced right back on this night to finish fourth while Cameron Nichols rounded the top five.

Up next at Outlaw Speedway its NASCAR Night on August 2, 2019. Tentatively, NASCAR Star, Kurt Busch is scheduled to be at the track for a meet and greet. Should plans change or if any other NASCAR drivers plan on making an appearance all the pertinent information including all gate times and admission prices will be posted on the tracks web site at www.outlawspeedwayllc.com or www.Ffacebook.com/OutlawSpeedway/.