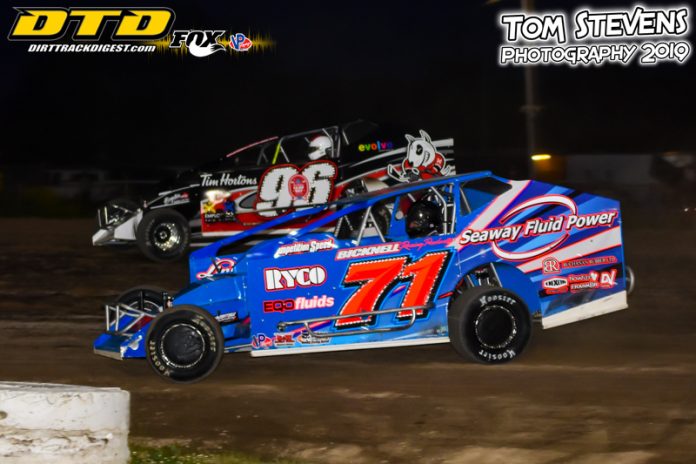 The Action Sprint Tour presented by Racerivalz.com made their third appearance of the season and it was Bailey Heard and Jacob Dykstra who brought the field to the green flag. Liam Martin, Darren Dryden, and Steven Beckett came together, in turn, one with Martin being the only one not able to continue. The second attempt at the original start would see Heard jump into the lead. Ryan Hunsinger started 12th on the grid and was already up to fourth by lap four, before spinning in turn one to bring out the caution. The restart would see Heard and Matt Farnham leading the field. Heard and Farnham would pull away from the field as Ryan Hunsinger spun for the third time in turn four to bring out the race’s third caution. The lap seven restart would continue to see Heard out front with Dykstra taking second away from Farnham. Dykstra would then take the lead away from Heard on lap 10. Farnham would use the outside to get around both Heard and Dykstra to take the lead away on lap 12. Dykstra’s night would come to an end as he slowed off turn two. Farnham would pull away from the field to score his second tour win in a row. “Its been a good week with the win at Ohsweken and to back it up here at Merrittville is pretty awesome” stated an elated Farnham in victory lane. “We had a solid finish tonight and a good points night on the tour” said runner-up finisher Josh Hansen. Race number eight of the 2019 Action Sprint Tour season will take place on Sunday, August 11 at the New Humberstone Speedway in Port Colborne, Ontario.

Bill Podwinski and Dalton Slack were on the front row for the S&W Service Centre Modifieds feature with Slack showing the way. Rob Knapp would take the second spot away from Podwinski with Mike Bowman moving into the top four early on. Bowman would take second away from Knapp on lap seven and would go after Slack. Mat Williamson would enter the top five as well on lap seven and would battle with Todd Gordon and Rob Knapp for third place. Bowman would take the lead away on lap 12 from Slack exiting turn four. Bowman would stretch the lead as Williamson would start to close in on second place running Dalton Slack at the halfway mark. Williamson would use lap traffic to pass Slack to take over second with nine laps remaining. Bowman would go on to score his first feature of the season.

Trevor Wright and Justin Sharp were on the front row in the 25-lap feature for the David Chevrolet DIRTcar Sportsman with Wright showing the way. James Michael Friesen would take the lead away from Wright on lap three and would start to pull away. Sharp would reel in Wright for second place as Friesen would increase his lead over the field. Friesen would dominate the event and would go on to score the feature win, his second of the season at Merrittville.

The third and final round of the TMR Triple Crown Challenge for the Central Fabricating 4 Cylinders was brought to the green flag by Garnet Wilson and Dan McKay and it was Tyler Lafantaisie taking the lead away. Cole Hardy would take second away as Lafantaisie continued to show the way. Jeremy Cooper would move into second and would pressure Lafantaisie for the lead. The top two of Lafantaisie and Cooper would pull away from the balance of the field. Kyle Rothwell’s left front tire shredded down the front straightaway to bring out the caution with five laps remaining. On the restart, Cooper, Jay Moulton, Anthony, and Tony Kelly all challenged for the lead racing inside the top five. Lafantaisie would hold off Cooper to score the win, his third of the season.


Cheeseburger Iftody would take the lead early in the main event for the Doidge Building Centres Mod Lites. Iftody would continue to lead as Randy Giroux, Jeffery May, and Josh Sliter battled for second place. May and Sliter would real in race leader Iftody as May battled for the lead at the halfway mark. Sliter would go three-wide with May and Iftody to take the lead away with eight laps remaining. A late-race restart would bunch the field up with Sliter and May pulling away from Begolo, who took third away from Iftody. Sliter would hold off May to score his fifth feature win of the season.

Tina Ronning and Kyle Irving shared the front row for the Dave’s Auto and Speed Centre V6 feature with Ronning taking the early race lead. Colton Lane would take the lead away at the end of the opening scored lap. John Couture would battle with Lane for the lead, with Couture taking the lead on lap three. Lane would challenge Couture for the lead and Lane would use a last-lap pass to get the win.

NEWS AND NOTES: 92 cars signed in pitside for the racing action.

Next weekend is a doubleheader weekend at Merrittville Speedway as on Saturday, August 3, Exclusive Imprint presents the Thunder on the Dirt Vintage Series plus Modifieds, Sportsman, Hoosier Stocks, Mod Lites, and V6’s. Pit gates will open at 5 pm and grandstands will open at 5:30 pm. Fans will have the opportunity to take Fan Tram Rides during intermission on the Bellinger Electric Inc. BEI Lightning Series Fan Tram.

Monday August 5, Bobcat of Hamilton and Baron Roofing & Siding presents the Big Block Modified Super DIRTcar Series as well as the BEI Lightning Series for Sportsman plus the $1,000 to-win Insta Panels Duel on the Dirt combined race for the 4 Cylinders. Join us starting at 4pm for a pre-race Chicken BBQ from John Michaels Banquet Centre. Pit and Grandstand gates will open at 4pm with racing beginning at 7pm.