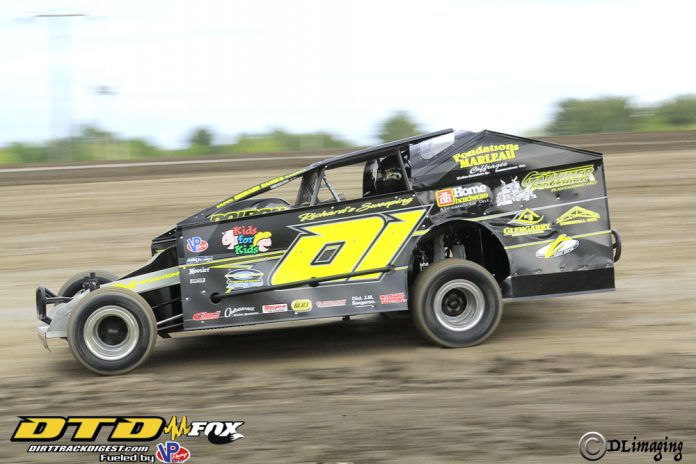 Patrick Dupree took the early lead in the event, before rear end trouble would sideline the 24 handing the lead over to Jessey Mueller.

Mueller would lead a number of laps before Raabe would sneak by on the bottom.

It was at that point Raabe would hold off Mike Mahaney for win number two on the year.

Jason McClatchie would take the lead away from Chris Reeves on a restart with four laps to go win his first Poirer’s True Value Sportsman Feature of the season.

The Hartson Total Opening Pro Stocks made their return to the speedway, with Pascal Payeur leading the majority of his event, to become the fifth winner of 2019.

Bruno Cyr would have a hard charge to the second spot, C.D. Beauchamp would finish third, Marc Lalonde fourth, and Jocelyn Roy fifth.

Michael Wright and Jim Mckiernan battled hard to the finish with Wright picking up his second win of the 2019 season.

Mckiernan would come up a bit short to finish in spot number two, Matt Leonard would have his best run of the season finishing third,  Joe Daniels would come home fourth, and Shawn Duquette fifth.

The Chris Frennier Motorsports Strictly Stock divison had another entertaining finish with Nathan Smart winning his fifth race of the 2019 season.

D.J. Gonyo would lead wire to wire for his second win of  the season.