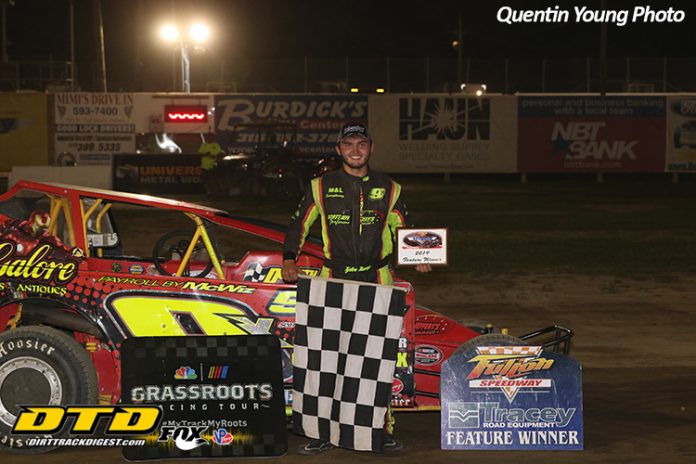 FULTON, NY – Tyler Trump is certainly having the best weekend of his short racing career. Following a third-place run against the big-blocks at Brewerton, Trump scored his first 358-Modified win at Fulton, holding off a number off late-race attacks.

“The last five laps I started seeing people,” Trump said. “I was trying to get through traffic as fast as I can, I couldn’t ride behind anyone because I knew they’d catch up. We messed with the car setup a little bit and it is rolling pretty good. It all worked.”

Tyler Trump took the lead at the drop of the green for the 35-lap Small Block Modified feature, chased by Bobby Herrington in the opening laps. Early on, Herrington was all over Trump for the lead, occasionally venturing off the top to try and pass Trump low.

A lap 10 caution for Todd Root allowed Trump to catch his breath and pull away from Herrington on the restart, with Tom and Tim Sears Jr. rallying to third and fourth.


Herrington didn’t have the speed after the restart that he did before, and abruptly pulled to the infield while running second on lap 14. This handed second to Tom Sears, with Tim close behind.

By lap 20, Trump had stabilized the gap over the battle for second and third, roughly a second and a half. After pressure from Tim for a number of laps, second place Tom Sears got some space as Tim hopped the cushion and fell back a good ways, but still in third.

When at Fulton, Larry Wight is a threat. Staring 18th, Wight shot slider after slider to crack the top five with ten laps remaining. While Wight was passing cars for position, Trump was about to do some passing too, but in the form of lapping cars.

On lap 25, Trump had to venture off the cushion for the first time all race to clear some traffic, and Tom Sears quickly reeled in Trump, within a single car length by lap 29.

With Tom Sears all over his bumper, Trump had his hands full. However, some traffic fell his way and was able to put some space between himself and what suddenly became a battle for second. Re-enter Tim Sears, who found a late burst of speed to not only catch the top two, but pass Tom on lap 32. Late in the race, the top had burned off enough to where the bottom was now a hot ticket, as evident by Tim Sears gaining all the ground down low.

With two laps left, Trump switched from top to bottom to get by a lapped car, giving Tim Sears the middle. Even after clearing the traffic, Trump stayed low during the last lap, and Sears went to the top to make one final charge. While he got a run, Sears couldn’t get by, as Tyler Trump scored his first ever 358-Modified win in exciting fashion.