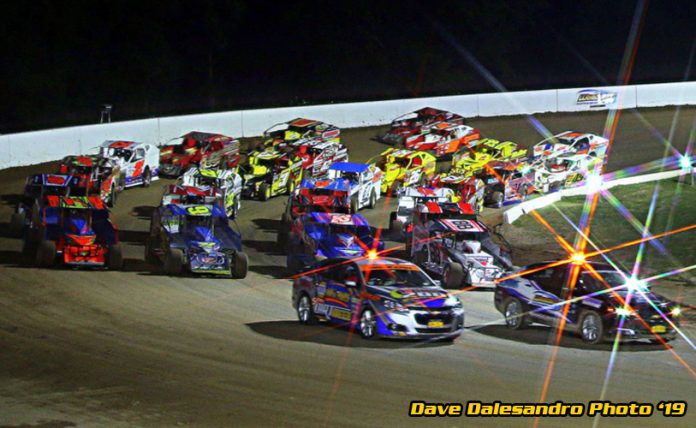 What a wild weekend. Friday I was at Brewerton and saw some great racing in every class, but the Sportsman feature was marred by some lengthy cautions.

The first feature of the night was won on the last lap as Casey Sykes put on a hard charge to win his fourth Mod Lite feature of the year at the “Brew House.”  Tucker Halliday and Zack Babcock filled out the top three.

The Modified feature was exceptional with Larry Wight winning after a lap 33 caution changed the complexion of the race. Tim Sears Jr. was able to capitalize on the restart to take second place with Tyler Trump finishing third, Andrew Ferguson fourth, and Billy Decker finishing fifth.

Twenty-eight Sportsman cars started the lone feature. Watching what unfolded closely from atop the tower stunned me. It wasn’t the car counts in the line up that puzzled me. A few drivers must have forgotten that their car has a right and left pedal near their feet, or what the pedals are for.


It’s unfortunate that the actions of a few driver’s can impact the outcome of so many other racers when they don’t show any maturity or respect toward their competitors or equipment during a race. If this honest assessment of what went wrong offends you, learn to lift in heavy traffic, use your brakes instead of someone else’s car, or find another hobby to take, out your aggression’s. I don’t want to see anyone under my watch get hurt.

A very wise man once said if you’d stop and think you’d be the genius in your family. In truth, this is a pattern that developed around this time every year, but in almost a quarter century of racing ministry no one can tell me why. I’ll also add these observations in no way reflect those of the track owners and management as far as I know.

The outcome of that race was still great, as another first time winner claimed the victory. Amy Holland outran Chris Mackey and Alan Fink, two of Brewerton’s winningests Sportsman drivers, to earn her first feature win with dominance.

Saturday Night Tyler Trump found the topside to his liking at Fulton Speedway. His lead grew pretty wide for most of the race as he cruised to his first Tracey Road Equipment 358 Modified win on the high banks. As laps wound down Trump shifted lanes and found some moisture on he bottom that helped him hold on to his lead. Tim Sears Jr. was the “bridesmaid” again, to finishing second to Trump, with Larry Wight, Tom Sears Jr., and Ron Davis III filling out the top five.

The RUSH Late Models went topless for the fans on this hot and humid night. Chad Homan was able to claim another Fulton win on the season with Max Hill racing to a second place finish while Chris Fleming chased them down for a third place finish. Chris and his wife Rachel are rejoicing over the birth of their daughter, Ava Jenna, who was born a bit earlier than expected last Friday. Both mother and daughter are doing well.

Sunday I was covering the Super DIRTcar Modified Series Hall of Fame 100 at Weedsport. An impressive talent pool showed up to compete for a ten thousand dollar winner’s share. As you’ve probably already read, Matt Sheppard won with dominance, driving an almost flawless race throughout the 100 lap distance. What impressed me about his drive was his recovery from a somewhat poor handling car in his qualifying heat to having a ride that he was able to drive so well through traffic that he lapped everyone but the other cars in the top eight spots. Eric Rudolph finished a distant second with Matt Williamson holding the third spot. Another impressive note was that five of the top eight finishers in the Hall,of Fame 100 are teams that compete weekly at Brewerton Speedway. What a testimony of the talent pool the D Shaped Dirt Demon draws on a regular basis.

Utica-Rome also had plenty of action filling in around their Monster Truck show. In the 30 lap Sportsman special Alan Fink conquered the Action Track for the win. Charlie Tibbets finished in second place, while Chris Mackey closed out the weekend with another top three.

The Fonda Speedway boys have been making it tough on the Utica Rome regulars in the Pro Stocks. Josh Coonradt claimed another win with Nick Stone claiming another second place finish over Mike Welsh, the 2017 track champion. Bobby Heintz won in the Rookie Sportsman division.

Saturday night was a rough night at Lebanon Valley. Hard crashes sent two drivers and two fans to the hospital for treatment. Before the close of the night a young driver, the 2018 NYSSCA rookie of the year, was tragically killed in an ATV accident at the track. Please keep Brandon Pitcher’s family, team, friends, and many fans in prayer as we all grieve the sport’s loss of a popular young driver. Our ministry extends our deepest condolences to everyone who knew and loved Brandon. Our prayer is that the peace of God would carry you through the grief in a healthy way until the joy of the Lord gives you strength to live in a way that honors Brandon’s life and the Lord.

As I conclude this column a heavy storm is blowing in with driving rain. It reminds me of the references to God’s voice sounding like thunder all throughout the Bible.

“My heart pounds as I think of this. It trembles within me. Listen carefully to the thunder of God’s voice as it rolls from his mouth.” Job 37:1-2 NLT

When my son was a toddler he received a red die-cast Dodge Viper collectible “toy” as a gift from an elderly relative who was very dear to us. He loved that car and played with it often in a respectful manner. You could see in his expressions how much he loved that toy. He loved to explain the opening doors and hood. To him that Viper was really something, which I’m sure had something to do with who gave it to him.

One day I was relaxing and watching him play with his “pride and joy” on the floor. Suddenly he stood up, picked the car up over his head and without hesitation slammed it to the floor with a look on his face I can’t quite articulate.

Before I could say a word a horrified look flooded his face. Tears began streaming down his eyes when I asked him what he was thinking. He stooped down, picked up the pieces, laid them on my lap, and sobbing in pain said “fix it Dad! Please.”

As I assessed the damage I thought to myself several ways I could make the repairs, but the toy would be more fragile and would never be the same. Looking on with hope, in a concerned voice he said “can you do it?” As I looked at his brokenness and remorse I said “no son, I can’t fix it, but I can get you a new one.” At that moment I saw his countenance change as joy replaced his pain. Any loving father would have done the same thing.

God, our Father is the one that taught me to love my son like that. I saw him willfully make a mistake. I saw his remorse, his pain, as he weighed the consequence of his actions. I saw his faith in my ability to do something to remedy a problem he was unable to. I saw his hope in the outcome. In the end, I saw his countenance change as joy replaced his pain when the promise of the new replaced the brokenness of the present.

God is the same toward us when we make mistakes, show remorse, and ask Him to fix it. He’s known since Adam messed up in Eden that we have a heart condition that causes us to fail. He understands that we’re unable to fix the condition of our heart by our self. Instead, He became one of us to experience the world as we do.

“He made their hearts, so he understands everything they do.” Psalms 33:15 NLT

Jesus Christ perfected the human experience so when we come to Him remorsefully asking Him to “fix it! Please!” He’s able to understand. At that moment He gives us a brand new heart. All we have to bring is our brokenness, the pieces of our heart we know we can’t fix, with faith in Him. He can replace what we can’t fix in our own life with something better, His life.

“Then I will give them a heart to know Me, that I am the Lord ; and they shall be My people, and I will be their God, for they shall return to Me with their whole heart.”
Jeremiah 24:7 NKJV

Every encounter with our God is an opportunity for a fresh new start. That’s just the way He is. If we can help you understand the depths of His love for you in a greater way, assist you in finding a fresh start, or with any needs you may have, please contact us by email at flchaplain@windstream.net, or on Facebook at Finish Line Chaplain.