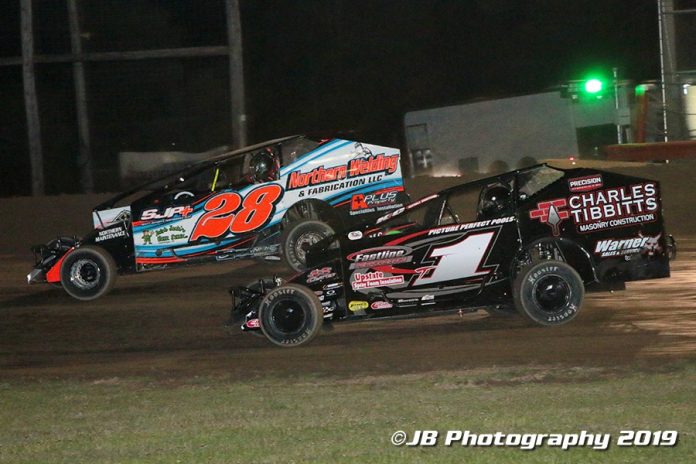 The program started just over an hour late Sunday night after Mother Nature reared her ugly head once more just before the start of the night’s racing program. The track crew went to work and got the track in racing shape with the help of the race teams pit-side. As a result, fans and drivers were treated to a lightning fast racing surface.

The DIRTcar Sportsman feature got underway with Charlie Tibbits wrestling the lead away from pole-starter Dave Moyer. Tibbits got the top spot working the high-side of turns three and four on the opening circuit of the extended 30-lap feature.

Tibbits set a torrid pace in the early go as the racing behind him was intense for the runner-up position. Moyer, Chris Mackey and Fink wrestled one another for multiple laps before Fink took the spot on lap 12.

As the battle for second finally began settling down Fink set his sights on Tibbits who found his way into traffic at the halfway point of the main. Tibbits worked through traffic quickly while Fink did his best to gain ground.

They remained the lead duo as they negotiated traffic. Tibbits remained in control with Fink moving closer, but he wasn’t able to get into striking distance until a lap 25 caution was necessary as Ed Lukas spun off the top of turn four.

On the restart the race was quickly halted under the red as A.J. Filbeck went for a ride in turn two when something on the rear of his ride broke going through the turn. Thankfully Filbeck walked away from the crash.

Fink fell in line behind Tibbits for the green. He immediately went to the top of the speedway in turns one and two looking for the lead when the action got back underway. Tibbits kept him at bay for a lap.

Tibbits fought to stay on top, but Fink was just too good on the outside. Fink made his move off of turn two on the high-side on lap 26. Tibbits battled back down low. Fink had the upper hand in turns three and four where he drove by on the outside for the lead.

In the Ted’s Body Shop Pro Stock 20-lap race fans watched as Shane Henderson raced out to the lead at the start. Nick Stone quickly moved into second with Josh Coonradt hot on his heals as he moved up to third.

Henderson was able to hold off the wolves for a few laps, but it was Coonradt making the move on lap five on the outside to get up to the lead.

Once in front, Coonradt was unflappable. Coonradt had Stone on his bumper for most of the race until a late bobble by Stone allowed him to race way. Coonradt earned the win with Stone finishing in second. Mike Welch came home third as invader Kenny Gates crossed the line fourth. Aaron Page finished fifth.

The final feature of the night was for the Bernie’s Performance Parts Rookie Sportsman division. Bobby Heintz started from the pole position and took the point from the onset. He was able to move away from the field with Mike Grover, Gary Miller and Riley Rogala waging a war for second.

By the end of the 15-lap feature, Heintz held on for the win with Grover in the second spot. Miller, Rogala and Matt Richardson completed the top five.

Next Sunday night, August 4, the Northeast Racing Products Trade Show and Power Seal presents the first appearance by the big-blocks in 2019 as they challenge the small-blocks for the Jan Corcoran Memorial in a feature worth $3,064. The Broedel Fuel Group DIRTcar Sportsman will race for $640. Both events are for show up points. The Ted’s Body Shop DIRTcar Pro Stocks and the Bernie’s Extreme Peformance Rookie Sportsman are also in action.

The grandstands admission price for this event is $20 with seniors/military members/students costing $18. Kids 16 and under are $5. Pit prices for the event are $35 for all DIRTcar Members and $40 for non-members. Pit gates will open at 4:30pm while spectator gates open at 5pm. Racing starts at 7pm.