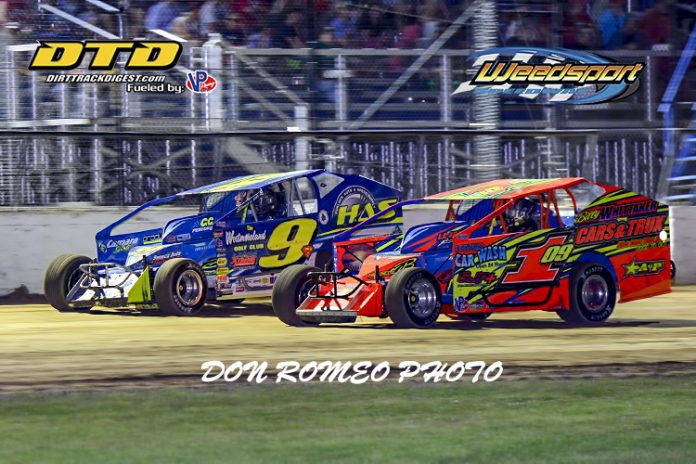 WEEDSPORT, NY – Super Matt Sheppard needed all of his power and green flag laps to seal his sixth Super DIRTcar Series win of 2019. Having secured a guaranteed start for NAPA Super DIRT Week XLVIII earlier this year at Can-Am Speedway, Sheppard passed the guarantee to runner-up and rival Erick Rudolph. Rudolph started eleventh and worked his way by all of the best Big Block Modified drivers around except for the one in the No. 9s. Outside pole-sitter and early race leader Mat Williamson finished third to round out the podium.

Matt Sheppard was the man and had the car to beat in the 100-lap Feature event. However, the No. 9s didn’t roll off the hauler fast. The team had to put some work in after Time Trials and Heat Races.

“This car was unreal tonight. We didn’t Time Trial very well. Probably our worst Time Trial all season. We were fifth in our group. I think this car was faster on lap 100 than it was in Time Trials!”

Sheppard started in the fourth position and quickly began showing a wheel to the runners ahead of him. Early on pole-sitter Billy Whittaker and third-place finisher Mat Williamson dueled for the lead while Sheppard watched in wait.

“Good starting spot, a lot of green flag laps in a really good race car, it was a lot of fun,” Sheppard said describing the keys to his race. With the dynamic race track, it took a lot of driver skill to find the right lines.


Sheppard went on, “The car was stuck. I could get the left rear in that moisture. But I think the key to this place is moving around when you catch lapped cars. I could roll the middle really well too and just not get jammed up. That’s what it takes to win at this place.”
Drivers and race fans alike were treated to a fantastic race track at one of the country’s best racing facilities.

“The track was in excellent condition. The best I’ve seen it in a long time. Smooth as glass top to bottom with two, three, four lanes of racing out there. My hat is off to the track crew tonight,” Sheppard noted.

Erick Rudolph started in eleventh and needed just a few more laps to track down the No. 9s. After passing nine cars, the No. 25R went hunting for one more. Unfortunately, he couldn’t find him.

“I looked for him [Matt Sheppard] but I couldn’t see him. I didn’t even know he was on the same track. A caution might have helped the cause but that’s neither here nor there. He won, I got second, and Williamson got third,” Rudolph said summing up his race.

There is no denying Rudolph’s excellence on the famed Central New York race track. He won the last Series event there and backed that up with a nine position advancement to grab second place. Rudolph said, “It was a great run for us from eleventh and to come up with second shows our racy our car was.”

Rudolph described his car, “It seemed like the car wanted to be on the bottom and that’s where I put it. Every time I moved from the bottom it really did not like to be there, but it was ‘turn and burn ‘em’ on the bottom for sure.”

Most observers agreed that Rudolph needed a few more laps and he would have been on Sheppard’s bumper.

St. Catherine’s Ontario driver Mat Williamson picked the outside pole in the 811 Dig Safely NY Redraw. From there he took the fight and passed then-leader Billy Whittaker.

“We struggled at the start and dropped back a little bit. That restart really helped us. I felt like we had something for Matt [Sheppard] on that one run but I think he was just caught up in lapped traffic and kind of playing with us. Congrats to those guys, they had a good car. It’s a solid third place for us tonight,” Williamson said.

Williamson has vocalized frustration with his performances at Weedsport Speedway. His subpar showing in the last Series race at Weedsport seemed to motivate him and his team to knuckle down and get it right.

“We had a good car in the black slick stuff. We thought it was going to get slicker. But I can’t thank the guys who were on the car enough tonight. We’ve struggled at Weedsport time and time again so to be up here at the end of the night is pretty cool,” Williamson said with a grin.

Race promoter and star of the Super DIRTcar Series tour Jimmy Phelps brought the No. 98H home in fourth place. There was not a single lap of rest for the Baldwinsville Bandit, as he moved up into the top five and a hornets’ nest of fast race cars. Phelps challenged for third and even fell back to sixth at one time. The No. 98H did not lack speed. In fact, he took the Billy Whittaker Cars Fast-Time Award after setting the fastest lap in Time Trials.

DIRTcar 358 Modified Series driver Ryan Arbuthnot made the tow down from the North to mix it up with the Big Blocks. Arbuthnot, unfortunately, picked unlucky number twelve in the 811 Dig Safely NY Redraw, but as a consolation, Arbuthnot picks up one free Hoosier Racing Tire.

The Hall of Fame 100’s KSE Hard Charger was Mike Mahaney from King Ferry, NY. Mahaney had a tough start to the night’s racing as he missed his Hot Lap session. From there it was a guessing game for Time Trials, and predictably, the No. 35 struggled without any practice laps. Fortunately, Mahaney got it going in the Last Chance Showdown and transferred into the 100-lapper. He made it all the way up to finish in tenth after starting in twenty-second.

Next up for the Super DIRTcar Series is another 100-lap rumble as the Series returns to Sharon Speedway in Ohio.