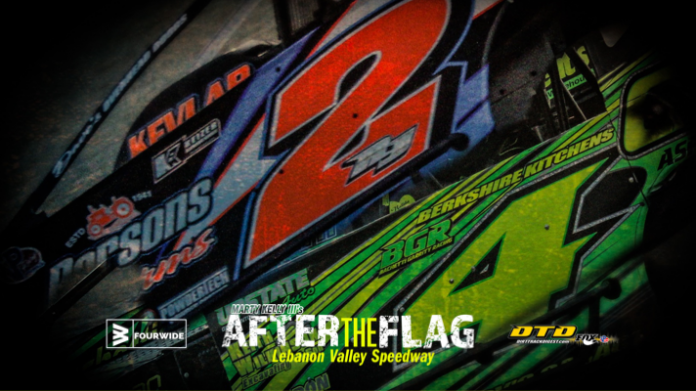 WEST LEBANON, NY – Duanesburg, NY’s Ronnie Johnson and Sheffield, MA’s Andy Bachetti each won a 30 lap big block modified feature this past Saturday on Sheldon Oil and Bulldog Concrete night, using a patch of bite on the bottom of turn two to secure their victories.

The sun beat down on the valley on the onset of feature number one, and Guilderland’s Marc Johnson was off to a fast start in the Scott Hamlin Racing PMC machine. Johnson’s lead was erased when a brutal incident on lap 13 occurred. Kyle Armstong endured one nasty hit and roll in turn three after a stuck throttle.  Steve Hough was involved as well.
When the race resumed, Ronnie Johnson crawled through the bottom side of the speedway, showing the nose of his Teo Pro Car chassis many times to Marc Johnson on the point. The popular, third generation driver, “RJ” charged to the point just passed the 2/3 mark of the race and never looked back, scoring his first win of 2019. Peter Britten was second, Marc Johnson was third with Kenny Tremont and Ricky Davis rounding out the top five.
In feature #2, Kyle Sheldon took the early lead from Ricky Davis and put his #629 Todd Sheldon tribute car out front.  Meanwhile, heavy hitters like Tremont and Britten were moving through the field. Bachetti used to bottom line on a restart to take the lead from Sheldon and cleaned house from there, with no challenges on his way to victory again this year.
Bachetti had this to say about his victory, “The night went well, it was eventful.  Overall we were really good.  I’ve got a shot at the championship and we are just focusing on the big picture.”
In small block competition it was Brett Haas making quick work of the cars starting in front of him to nab his third victory of 2019. Guy Sheldon, Andy Bachetti, Tim Davis and Jason Herrington rounded out the top five.  For Haas the win was a much needed positive result for the #55 team as they battle for the points lead.
“It was the best possible recovery we could have had after the heartache and frustration we had leaving the track last Saturday,” said Haas.  “I feel that it shows how resilient our team is and this win is truly for them and our fans.  I would like to ask everyone to keep the Pitcher family in their prayers as well as everyone involved in the incidents Saturday night at the track, and also my mother who has been in the hospital since Saturday night.”
In Pro Stock competition, Rick Duzlak took the lead from Nick Arnold to pull off the win, his second in a row. Arnold held on for second with Nick Hilt joining them on the podium.
Jeff Kreutzinger and Scott Morris picked up the pure stock victories.