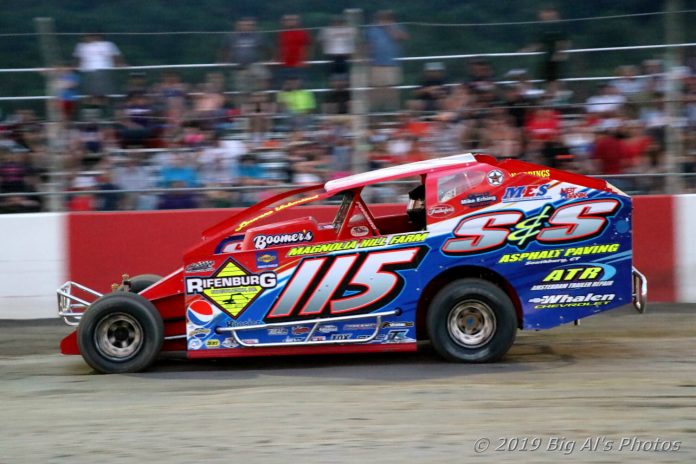 Walt Hammond Jr. and Wayne Stearns put on a great battle for the top spot in the first half of the 100-lap distance of the Pepsi Sportsman Modified race before Tremont arrived. Tremont started 17th on the 30-car field and needed 56 laps to get to the lead, but once he was there, he was long gone. The West Sand Lake, N.Y., driver built a big advantage during a long green-flag run, and then held off all challengers at the final restart – which came at lap 99 and extended the race by one lap with a green-white-checkered restart.
Troy, N.Y.’s Kale Groff had a spectacular Devil’s Bowl debut as the runner-up finisher. A regular competitor at Albany-Saratoga (N.Y.) Speedway, Groff had just three top-10 finishes this season at his home track before tackling the Vermont speedway for the first time. He drove from 18th starting position to reach second-place runner Stearns and engage in a fun duel in the final quarter of the race, and finally took the position late in the going.

Stearns, of Bradford, Vt., finished a season-best third, followed by Adam Pierson, who came out ahead of Joey Scarborough after an intense battle. Tanner Siemons finished sixth ahead of Vince Quenneville, Josh Sunn, Frank Hoard III, and Walter J. Hammond. Tremont has amassed a comfortable 74-point lead over Hoard in the championship standings, 463-389.

Shoreham, Vt.’s Anthony Warren found himself in the right place in the rough-and-tumble O’Reilly Auto Parts Limited Sportsman feature, and ended up in Victory Lane for the second week in a row. Anthony Ryan was leading and headed for his first win when contact from second-place driver Matt Bilodeau sent both cars head-on into the wall at lap 14. Warren inherited the lead just as the 20-minute time limit was enacted and a green-white-checkered finish was set up, and he stayed out front despite a strong challenge from point leader James Hanson.

Hanson was the runner-up and protected his lead in the standings. Bobby Schmidt had by far his best performance, driving from 13th to finish third. Johnny Bruno finished fourth with Dave Snow fifth.


Mark Norris scored a popular first win in the Super Stock division after that 20-lap race was also cut short three laps by time constraints. The Benson, Vt., resident took the lead at lap 5 and held it through the end; the victory was his first on dirt and was the first win for the former asphalt competitor since a 1997 victory at Wiscasset Speedway in his native Maine.
Josh Bussino finished second with Bill Duprey third, Scott FitzGerald fourth, and Kaleb Shepard fifth. FitzGerald gained ground in the standings and now leads his son, Andrew, by 84 points.

The title fight for the Mini Stock division changed dramatically when Middlebury, Vt.’s Jake Barrows drove to his second win of the year in a 20-lap race. Craig Kirby scored his career-best finish as the runner-up, and Tim Simonds was third. Willie Rice and rookie Kendra Walden had their best results of the year in fourth and fifth, respectively.

Previous point leader Shawn Moquin retired from the race with engine problems and Barrows’ win was good enough to take over the championship lead. Barrows, Moquin, and Kirby are now all within 18 points at the top.

Thirteen-year-old rookie Evan Roberts of Fletcher, Vt., grabbed his fifth victory of the season in the 20-lap Friend Construction 500cc Mini Sprint race and built on his point lead. Roberts took over just before the halfway mark in the caution-free race and had an easy drive to the win.

Dakota Green took his best finish of the year in second after leading early. Shawn McPhee was third ahead of Samantha Mulready and John McPhee Jr.

Ripton, Vt.’s Chris Sumner made it a perfect two-for-two in the Enduro Series, winning the second 50-lap race of the season; Sumner also won the opener on July 3. The father-son duo of Bill and Shawn Fountain put on a good battle for the lead before Sumner got ahead just after the race’s only red flag stoppage on lap 32. Bill Fountain spun out and was eliminated from contention, but Shawn Fountain finished second. Tim Whitney was third, one lap behind the leaders, with Kenny Torrey and Brent Wilbur next in line, each two laps down.

Devil’s Bowl Speedway is back in action on Sunday, August 4 at 7:00 p.m., as Friend Construction presents a special event for Limited Sportsman division and the annual Kids Racecar Rides at intermission. General admission is $12 for adults, $10 for seniors (62+), and free for kids 12 and under.