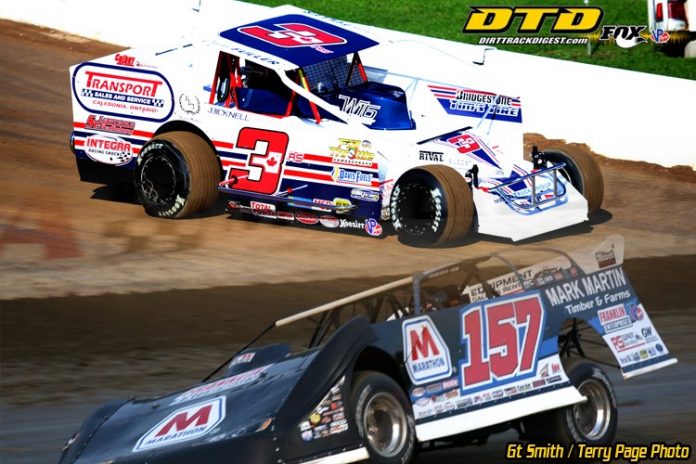 Defending World of Outlaw Late Model Series Champion Mike Marlar is set to make his big-block Modified debut this Wednesday night at the Eldora Speedway with the Super DIRTcar Series. Marlar, of Winfield, Tenn., will be driving the No. 3RS for the Slack family.

On Monday afternoon DirtTrackDigest.com was able to reach Bob Slack to discuss the details of the relationship between the unique pair as they prepare for their trip to Eldora this Wednesday night.

“I met Mike when I was down at a Late Model race through a good friend of mine Kevin Rumley,” commented Slack. “He was driving for him at the start of the year. He had mentioned to Kevin a couple times that he liked the big-block Modifieds. He knew that Kevin and I were friends. He wanted to drive one. When we met we hit it off instantly. He said how much he liked them so I told him I’d build one and we’ll go racing. He was shocked, but that was what we decided to do.”

Slack is excited about the chance to have his family car at Eldora.  It’s something different as the entire family will be together for the event.


“It’s really cool being that my brother (Roger) runs that deal out there and it means a lot to my dad (Randy) too,” stated Slack. “I personally don’t care where we race it; I just want to race it. It’s cool to go to Eldora. I’ve only been out there once to see a race. It will be fun to be there with my kids, my wife, my mom, dad and brother. It’s neat that the whole family can be there. That is really cool.”

Heading to Eldora Speedway could be a daunting task for the new combination with Marlar having no experience in a big-block Modified. The one thing the team has going for it is Marlar has plenty of laps around the historic facility while behind the wheel of a Super Late Model. Slack hopes to get Marlar comfortable in the ride while getting valuable laps in the car.

“It’s going to be big a learning curve for him because he’s never driven anything that is center steer before,” stated Slack. “I guess the best part about it is Mike’s got some laps at Eldora. It is something that is familiar for him, but it’s going to new to us. We’ve also got a brand-new motor package. We got a brand new everything. I’ve never owned a big-block before. Basically, we want to go out and get some good seat time, get a good 100 laps in and do what we can to get him comfortable while seeing what we need to be better at. We are basically looking toward the future. We want to do some more racing together with him. We didn’t get a chance to practice or run any other race so we are going to use this as a block in the foundation.”

As mentioned, Slack hopes this outing helps grow the relationship as the team has some very high hopes going forward. Their goal is to run even more Super DIRTcar Series events, possibly in the near future.

“We ultimately want to run Super DIRT Week,” cited Slack. “We both kind of have it penciled in in hopes of doing that. His schedule is crazy. He’s got a lot of stuff going on. He owns a business and races a lot. We’d like to run a couple more Super DIRTcar Series shows. Maybe even Merrittville and Ransomville coming up this week. We’ll have to see how everything goes at Eldora.”

The new motor combination that Slack mentioned is one being specifically designed as a spec option for the big-block Modified division. Slack and the folks at Bicknell were instrumental in getting the W16 motor option available for small-block competition and they are working hard to get the same type of option available for big-block teams to help reduce costs.

“It’s a new motor package that DIRT (DIRTcar) has come up with,” mentioned Slack. “I guess there is a couple of them being built. It is a spec motor. Anybody can build them with the specified parts. As soon as we started talking about it, being as we pioneered the W16 thing with Wegner (Motorsports), we were chosen or approached about trying to do it. There are a lot of things to be worked on it yet, but we are going to take it and see how we fair. We’ll get to run it five or six times this year, maybe more.”

Slack wanted to send special thanks to Pat Morrison at Morrison Performance Engines, as he’s the one helping the team get the motor ready for action this week.

Come Wednesday it will be interesting to see what Marlar and Slack do competing against some of the best big-block drivers in the country.

Attempts were made to reach Marlar for comment on this story, but Marlar is currently in Charlotte working on his entry for the NASCAR Gander Outdoors Truck Series event which he’ll compete in the very next night at Eldora in the Dirt Derby event.