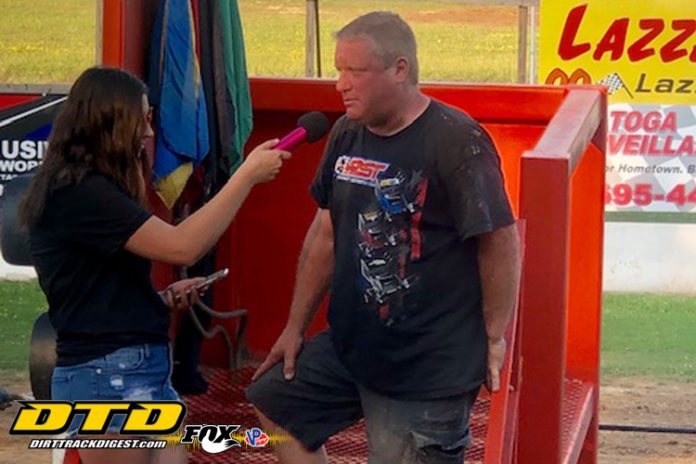 It was a special night at the “Great Race Place” on Friday.  Promoter Lyle Devore chose this night to honor his late dad, Stan who passed few years ago.  Before the night’s activities began we spoke with Lyle about how great it is that he honors his dad each year.

“There is not a day that I don’t think of him,” said Lyle.  “I look at where he sat in the stands each race night.”

Each week Mia Mangino interviews different drivers before the night’s racing and on this night she interviewed Lyle.  It was very interesting to hear where his passion for the sport came from.  Lyle’s grandfather would load the family into the car and go to White’s Beach Speedway, one of the many older now defunct tracks in the area.

As a youngster his parents would bring him to the Malta oval and Lyle said, “I didn’t see many finishes, I was usually asleep.”  Lyle’s first job at the speedway was picking up trash and now he’s running one of the most successful tracks in the Capital District.

In honor of Lyle’s dad’s favorite No. 32 the Modified feature was 32-laps and paid $3,200.  Along with that, Grady’s Vintage Racing Photos posted a bonus for each Modified heat.  Each winner received $320.  Heat winners were Neil Stratton, Mike Mahaney and Bob Hackel, IV  All were very happy with the additional money.  This Friday is John Grady Memorial Nostalgia Night and something you don’t want to miss.  Last year was the inaugural and was one great night for all racing history buffs. We stopped by the pit area of the No. 00 Pro Stock driven by Josh Coonradt of Saratoga Springs.  Josh was a proven winner in the Street Stock class before moving up to Pro Stocks.  He has proven himself in the Pro Stocks at Albany Saratoga collecting four wins and nine top fives.  At Fonda he won the Hondo Classic and has a career total of four wins at the track.  He also runs Sunday at Utica Rome Speedway where he has a win and four top fives and is leading the points.  Josh contributes his success to all the effort put in during the week.  Josh says he enjoys the Pro Stock class and as far a moving up the issue would be cost.  Josh’s girlfriend and crew member, Heather King, also knows about wheeling a race car.  She has four wins at Glen Ridge and one at Fonda in the Four Cylinder Cruiser division. If you have followed us for the many years we’ve been writing, you know our interest in the history of the sport and the records many drivers have obtained.  A few weeks ago Ed spoke with Rocky Warner about his career win total and Rocky said no one had every put it together.  Ed spent the last few weeks checking our collection of racing newspapers and other material back 20 years and was able to find many of Rocky’s wins in Pure Stocks, Pro Stocks, Sportsman and Modified and has a total of 182 as of 7/28/19 and he’s still searching.  Rocky added to his Modified list this past week with a first ever Modified win at Albany Saratoga and his fifth Modified win this season at Fonda.  Rocky then went to Glen Ridge on Sunday and tripled with a win in the Crate Modifieds.  And to top the weekend off for the Warners, Rocky’s young son, Corky picked up his first ever win in the JR Slingshots and just for good measure, Rocky’s oldest son, Tanner, finished tenth in the Crate Modified feature that his father won.  Guess maybe Ed should start a win list for Corky,  it will save researching records years from now. Danny Varin has a true love of racing.  “Too much work, not enough racing,” said Danny as he sat in his hauler with owner of the No. 93 Modified, Ed Munger, and crew on Saturday night at Fonda.  If he didn’t have to work he says he would race every race he could but like most weekend racers at local tracks, Danny Varin needs to work to feed his racing habit.  And he also has a wife and two children.  Sprints or Modifieds, Danny is good in both and says he doesn’t have a preference, it’s just important to get seat time.  “I’m intrigued with the 410 Sprints,” said Danny.   He ran three events just recently and did well.   Danny grew up in racing, and was behind the wheel at a young age racing on a small track, racing carts, at his father’s garage in Sharon Springs so it’s no surprise he would be happy as long as he’s racing, it’s in his blood. It’s always great to find first time fans at a track and on Saturday at Fonda we found Melissa and her daughter, Katie in the novelty booth buying one of the Fonda 200 shirts.  They were there for the first time with their family because, dad, Kevin, had wanted to bring them for a long time, so finally, for his birthday in early July, they decided it would be a great gift and the shirt was part of the deal.

Sunday before the gates opened at Glen Ridge the Hall of Fame committee met to decide on the 2019 inductee nominees.  As a result of that meeting the following will be inducted into the Hall of Fame; “Custom” Bob Niemietz, Bill Nelson, Bob and Rob VanAernam, Butchie Irwin and Denny Tilison.  Induction ceremony is scheduled for August 18, at Glen Ridge, time TBA. The CRSA Sprints made a stop at Glen Ridge on Sunday and Jeff Trombley was just one of the drivers making the trip on Sunday after his sixth place finish at Fonda on Saturday night.  Trombley is currently leading the point battle for CRSA and says he is still having fun sprint racing with car owner Warren Alexson and former racer himself.

The CRSA move on to Albany Saratoga on Friday, August 9, 2019, and then back to Fonda on September 14 after the Montgomery County Fair break at the track.  These two events are part of the Kennedy’s Towing “Northway 90 Challenge” mini series. There was another first time winner at Glen Ridge on Sunday and although his name is not familiar to racing his lineage is, Isaac Walker winner of the Limited Sportsman feature is the great-grandson of George Proctor.  Although George was unable to be there for the win, we did catch this shot of him with Mimi Lazzaro on Saturday night at Fonda. This weekend is Palmer Service Center Night and Dollar Hot Dog night at Fonda on Saturday with all divisions racing.  Also on Saturday, Lebanon Valley is honoring the pioneers of the Valley with a “Legends of the Valley” special event with The Old Buzzard 30 Pro Stock event, DMNT Vintage cars and all divisions of racing.   John Grady Memorial Nostalgia Night comes to Albany Saratoga on Friday and Glen Ridge has the annual NYSSCA Safety Night and Cystic Fibrosis Awareness Night, and the Palmer Service Center Modifieds join all divisions.

In closing, our prayers go out to the family of Lebanon Valley driver, Brandon Pitcher who lost his life in an ATV accident this past weekend.