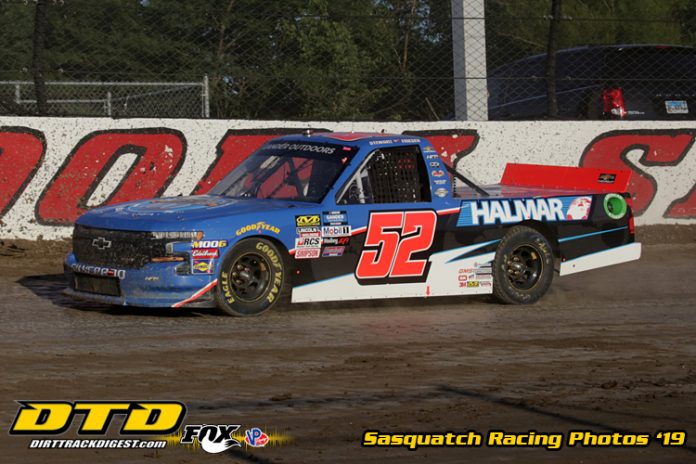 Since Stewart Friesen has become a regular with the Gander Outdoors NASCAR Truck Series, he’s been the favorite heading in the annual pilgrimage to the Eldora Speedway for the Dirt Derby. Unfortunately, things have not gone the right way for the Sprakers, N.Y., pilot. He’s been on the podium, but has never broke through to take the elusive win.

For the 2019 edition, the team went to work in the hopes of giving Friesen the edge he once had in the race. They think they’ve brought the perfect package to put his truck in victory lane.

“We’ve been close and it’s slipped away two years in a row,” commented Friesen before Wednesday’s practice. “We’ve done a lot more homework coming in this year to be better prepared. Last year we kind of rested on what we did two years ago and everyone caught up a little bit. We’ve done a lot more work and hopefully it pays off.”

Friesen has yet to get a win on the competitive series. He’s got numerous seconds to his credit. He has yet to have everything fall his way for him to end up in the winner’s circle. Even though he’s win-less, he’s not going to let that bother him as he hits the track Thursday night.

“This whole series and the way the races play out is really exciting,” said Friesen. It’s really unpredictable. A lot of stuff can and will happen. You never know. We’ve had fast trucks and couldn’t seal the deal as far as wins and so have other people. It’s been a crazy year.”

Friesen had a solid start in the trucks to the 2019 season. He was the point leader for much of the early go. As of late, things have gone south meaning a win at Eldora is even more important.  If he wants to make the chase for a shot at the title a win is essential. He sits fourth in the overall standings, but sixth based on series winners.

“There is definitely a lot more on the line,” cited Friesen. “A win anywhere would be rewarding, that is what we are here to try to do. With more on the line, it would be even more special. I don’t think it puts any more pressure on us. I put enough pressure on myself every week to go out there and do well.”

Pressure is something Friesen struggled with at Pocono Raceway. That resulted in a first lap crash that ended the day on a very sour note. Coming into Eldora, he’s worked on just having fun again and letting things fall as they may.

“Like I said, I put a lot of pressure on myself last week at Pocono and after I crashed on the first lap, I got pretty down on myself,” stated Friesen. “I spent a lot of time with my guys this week, Chris from Halmar and my wife, and we pretty much realized we need to enjoy ourselves and go race. That’s what when we do the best and have fun.”

On Wednesday Friesen topped the charts in the final practice for the trucks putting him in very good position for Thursday night’s main-event. Before he gets to that race, he’ll run the Modified as well.

“Obviously running two divisions in the same night is tough, but every driver wants to do it,” mentioned Friesen. “It’s a lot of fun too. Right now I’m asking myself, ‘why the hell am I doing the Modified too?’ but at the end of the night it will be all worthwhile. I’m looking forward to everything.”

The Modified has been his place of comfort and should serve to relax him, although he had problems in time trials that forced him to a backup car. That resulted in a tail starting spot for the feature. No matter what transpires, the Modified helps give the driver of the Halmar Friesen Racing No. 52 Chevrolet some confidence.

“I’d probably be hanging on the end of a rope somewhere if it wasn’t for being able to go back and run the Modified, win some races and have fun,” joked Friesen. “It’s been pretty crazy. We’ve had so many near wins slip away with the Truck. To go back with the big-block has kept my sanity a little bit.”

He’ll need that and a little bit of luck on Thursday night and maybe he’ll finally breakthrough for that elusive win. He’ll start from the pole of the fourth qualifying event to see where he’ll line up in the feature event.