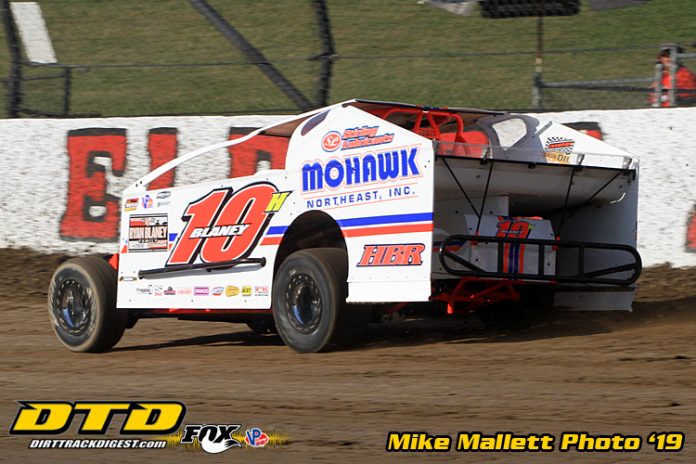 ROSSBURG, OH – The Super DIRTcar Series has returned to the Eldora Speedway for the first time since 2017 with 29 cars entered into the event.  Six different drivers have won events at Eldora in the past with the Super DIRTcar Series.  Will there be a new winner or will one of our former winners find their way back to victory lane?

Stay tuned to Dirt Track Digest all night long for updates from the event.  Please refresh this page regularly to get the latest updates.

4pm – In a quick conversion with Mat Williamson, he confirmed that the Super DIRTcar Series is doing random drug testing for this event. Time Trial Note
Stewart Friesen indicated that his motor was “lying down” so they will be going to a backup car for heat race action. Heat Race Notes
Stewart Friesen was put to the rear for not reporting a car change to Super DIRTcar Series officials.  He’ll start scratch in the feature…

Mike Mahaney to a backup car, he’ll also start at the tail…

The @SuperDIRTcar @EldoraSpeedway Line-Up
1 Rex King Jr
2 Billy Decker
3 Danny Johnson
4 Paul St-Sauveur
5 Erick Rudolph
6 Josh Hohenforst
7 Larry Wight
8 Mat Williamson
9 Peter Britten
10 Matt Sheppard
11 Brett Hearn
12 Jimmy Phelps
13 Dave Blaney
14 Chris Hile
15 Jack Lehner
16 Ryan Watt
17 Jeremiah Shingledecker
18 Ryan Godown
19 Demetrios Drellos
20 Will Thomas
21 Matt Farnham
22 Chris Grbac
23 Rusty Smith
24 Marcus Dinkins
25 Kyle Coffey
26 Rick Regalski
27 Mike Mahaney
28 Stewart Friesen
Feature Recap
Rex King Jr., holds off Billy Decker on the opening lap to take the lead with Decker and Wight battling for second.
King controls the early pace with Wight wrestling second from Decker on lap five.
We get our first caution on lap seven as Godown slows on the backstretch and heads into infield.
The green is out once more on lap 10 with Wight challenging King for the lead.  King got a good run off the bottom and continues to lead with Sheppard now to third.
Sheppard takes the second spot from Wight on lap 14 as King continues to show the way.  Wight and Sheppard continue to battle one another for second.  Wight down low and Sheppard through the middle.
As we reach lap 20, King is holding is own out in front with Sheppard starting to close the gap.  Then it’s Wight, Decker, Rudolph the top five.
With 21 laps in King is now in traffic, Sheppard close while Rudolph works Wight for third.
Both King and Sheppard working way down low on the speedway as we get a yellow on lap 25 as Chris Grbac slows and stops on the frontstretch.
The race is green again on lap 31 as King and Sheppard get on the throttle.  King dives low going into turns one and two, but Sheppard gets the lead through the middle.
Here comes Sheppard, he’s up to eighth from last with 34 laps complete in the main-event.
With 35 in the books, Sheppard leads King, Rudolph, Wight, Decker.
It’s all Sheppard as he opens the gap on the field with 40 laps complete.  Rudolph now goes by King on lap 41 to take the runner-up position.
King is now in a dogfight for third as he’s got Decker all over him in traffic for the spot.  Decker working the cushion as King stays in the middle groove.  There are 45 laps complete.
At the halfway point it’s all Sheppard, who is now working in the cushion, out in front then Rudolph, Decker, King, Wight, Williamson, Johnson, Friesen, Farnham, Drellos.
Williamson starting to make some moves, he’s working Wight for the fifth position as he runs the bottom of the track and he takes the spot on lap 52.
As Sheppard works traffic, Rudolph is starting to chip away at the advantage.  He’s making ground rim-riding it all the way around the half-mile.
Rudolph is there as he goes high, Sheppard goes low and we have a race for the lead on lap 58 and now caution lap 59 as Smith slows with issues.  Sheppard leads Rudolph, Decker, Williamson, Wight, King, Johnson, Friesen, Farnham, Drellos.
Lots of drivers pitting under the yellow including Hearn, Britten, Hohenforst, Watt and others.  Tire changes the norm right now.
Alright here we go, we are racing one more time on lap 64.  Sheppard feeling the pressure from Rudolph.  He’s on the top, Rudolph tried the bottom.  Williamson takes third.
Sheppard very good so far in open track, Rudolph chasing, but he’s got his own issues as Williamson challenges him on lap 70.
Now Sheppard is working the wall in turns one and two and the bottom in three and four.  Rudolph is doing the exact opposite.  It’s a battle now with 74 complete.
Rudolph to the lead on lap 75, he gets the run off the bottom of turns three and four.
Williamson closing in on Sheppard for second as we get to lap 78.  Sheppard is searching high and low to get back to Rudolph.
Rudolph leads lap 80 over Sheppard, Williamson, Decker, King, Wight, Friesen, Hile, D Johnson, Godown.
Sheppard struggling now as he loses second to Williamson on lap 81 with Decker getting third on lap 82.
There are 15 laps to go for Rudolph as he pulls away.  Williamson and Decker are battling hard for second.  So far so good for Williamson.
Decker is going to get second now as he goes by Williamson with 12 laps to go in traffic.
Caution lap 92 as Hile slows to a stop on the frontstretch.  Rudolph leads Decker, Williamson, Sheppard, King, Wight, Friesen, D Johnson, Godown, Mahaney.
Green lights are back on.  Rudolph gets away from the field to lead lap 93.
Five laps to go for Rudolph as he leads.  Decker and Williamson continue to wage war for the second spot.  Then it’s Sheppard and King Jr.
Erick Rudolph wins @SuperDIRTcar @EldoraSpeedway over Billy Decker, Mat Williamson, Matt Sheppard, Rex King Jr., Wight, Godown, Friesen, D Johnson, Mahaney