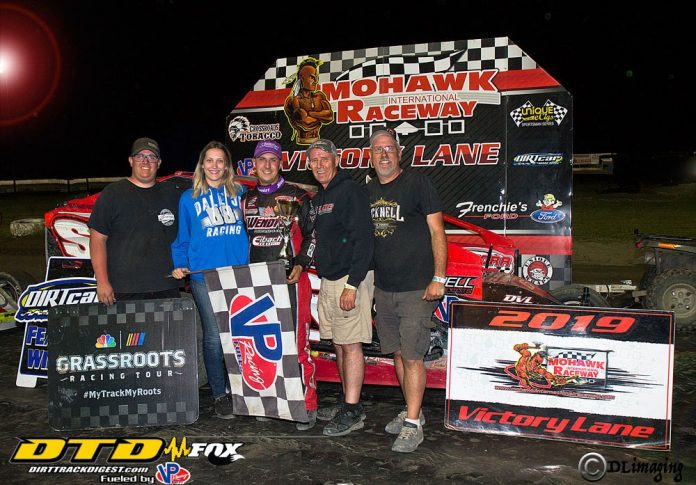 It’s astounding to watch teamwork in harmony, where all the t’s are crossed and the eye’s dotted. A small but closely net team, where each of the members knows their duties well and support each other as the race unfolded. Unlike some of the mega teams who come with two cars and spears of everything, team Williamson rolls into the pits with a single deck trailer, one car, and just enough parts to keep the car going if needed. Crew Chef Ray Samuel explains: “We come to the track with just one car and what we would commonly need to keep the car going when we are on the road excluding a spear motor, but for us, we seem to get by just fine with this game plan. “


The team primarily consists of Driver Mat Williamson and Dad Randy, Crew chief Ray Samuel, Corbey “ Beef” Daniels and Anthony Macri who could not make the events, due to work commitments.

Mat, a 10-year veteran in the Modified ranks, started out racing Karts at the age of five. By the age of thirteen, Mat then moved up into the Sportsman class and then onto the Modified class in 2009.

With over 100 wins under his belt and countless track championships, Williamson has worked hard to get where he stands today and with that success has come a heavy workload for 2019. When not racing the team car, Mat is slated to be the driver of the Buzz Chew Race teams car for the Super DIRTcar Series. He will also be driving the C W Racing team’s car at Ransomville Speedway. Mat will also race the STSS Series North driving the Behrent’s No. 3 car. All-in-all, it’s already been a very busy season for the 29-year-old St. Catharines, Ont., native.

Coming into the DIRTcar 358 Series event that evening was a bit of a whim. The team had success in the first two rounds of the series held at Can-Am Speedway followed by Fulton Speedway. So they decided to see if the could improve on there lead in points. Mat explained,  “We don’t intend to race all the events in the DIRtcar 358 Series as we have other race commitments, but we are hoping to get enough points built up to compensate for any missed races .  Hopefully the plan will keep us in the game as one of the top players in the series”.

As the night began, Ray kept track times as Mat went out for hot laps, tracking each of the players who might be the biggest challenger. Mat and Ray quickly discussed times and went over how the car felt. Then they went threw their tire selection, choosing ones they felt would work best for the track conditions. All the tires had been prepared back at home by Mat and Anthony Macri by going over Ray’s notes from previous visits to Cornwall Speedway.

Once they had a plan of attack, the team prepped the car for time trials, which was quickly followed by their heat race.

In the heat race, Mat started on the front row alongside Mike Mahaney in the 35 car but moved quickly to the front, and after eight laps captured the win.

Going over the times with Mat showed him that they had to step up their game as Ray stated, “We had the second slowest time out of all the heat race winners at 14.86 for best lap while Yan Bussiere had a best lap of 14.77 and Steve Bernier in the 25 car had a best lap of 14.521.” So once again Mat and Ray went over their tire selection and what suspension adjustment were needed.

Ray, along with Corbey, began working on the car adjustments and fuel, while Mat retreated behind the trailer to prep the tires.

“I like to do my tires,” cited Williamson.  “It’s a way to get away from things, being alone doing to the tires to what I feel we need to in order to get through the 100 lap race ahead.”

Ray explained: “Even at home Mat will help Anthony, our main tire guy, just to clear his mind. Doing what he does and what he represents can put a lot of pressure on Mat and by getting away doing the tires, which need to get done, this gives him some me time. “

As the time clicked down to race time you can here the DIRTcar officials sounding the horn to bring the cars to the line. Mat and Ray quickly went over everything once again as Ray updates the notes and reviews everything done so far to the car with Mat, “we are good to go” Ray expresses to Mat as he prepares to get in the car.

One-hundred laps, 31 drivers and Mat on the outside from the forth position at the green.

The hard-charging Williamson took command of the race early dueling it out with Steve Bernard and Luke Whitteker. By lap 20 he was having a hard battle with Stevie Bernier in the 25 car and once again prevailed with the lead. But as lapped traffic come into the scene, things changed.

“The biggest stubble was getting around J.F. Corriveau in the 96 car,” explained Mat. “J.F. is a really good friend and he put up quite a fight before I got around him. That took a lot out of our car, opening up the challenge from Mike Mahoney. I thought Mike was going to get around me, but I got a lucky opening in traffic and took it, which held Mike off from making the pass. All-in-all, it was a great race and we are on a bit of a roll, explained made just hope we can keep it going.”

Mat did go on to win that night, a tough race but as the team unfolded there routine, throughout the night, you can see how they set up the winning outcome. It is clear, that Williamson along with his team is bound for success and making their presence known in the feature as Mat has come into his own in the last few years.

As the night was winding down a good celebration in the hauler began to take over the night. Ray finished up his notes of the night’s race.  He’s always compiling the data, but once done he to joined in the festivities.

Mat repeated his success the following nigh at Mohawk picking up his third 358 series win. A week later he came home with a second-place finish at the Utica-Rome Speedway’s series event.

Mat leads the 358 Series points, but only time will tell if he has enough points to go on to win the series Championship.  Maybe he will take up the challenge at the one event still available for him to put the series away and that is at Plattsburg on August 20th, let’s see what happens!!