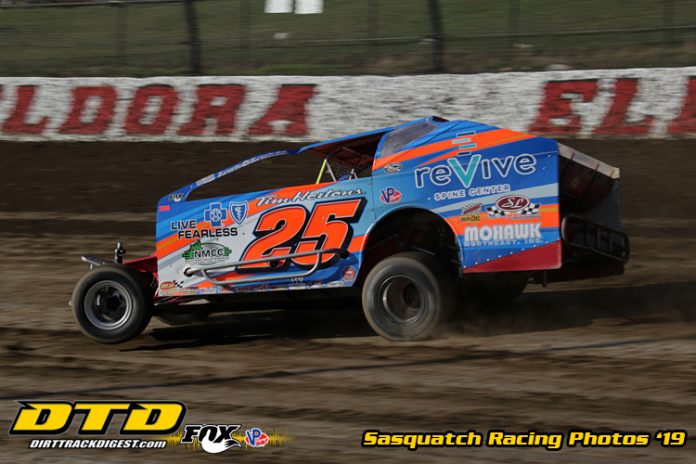 ROSSBURG, OH – The 2019 Eldora Dirt Derby 100 will be long-remembered by those who witnessed it. The spectacular race saw Erick Rudolph best eight-time Super DIRTcar Series Champion Matt Sheppard with a pass in the final quarter of the race to win $10,000. Rudolph held off long-time Series hero Billy Decker and rival Mat Williamson on a late-race restart to seal the win as well.

Rudolph, with a grin ear-to-ear, could barely believe he was standing in Victory Lane at Eldora Speedway.

“You always hear about Eldora and we never had any luck here. I think blew up every single time I’ve come here, the last three times. I’ve never had a chance to finish a race and to come out on top is amazing,” he told announcer Timmy Baltz.

In the early going it did not appear that the No. 25R would be a major threat to win. Watertown, NY’s Matt Sheppard cut through the top five and took the lead fairly early in the running. He held it until 25 laps to go.

Rudolph noted, “Early I was wasn’t that great but I was just hanging in there. As the laps ticked off I could see my car was coming alive a little bit. Either that or they were coming back towards me. I can’t say enough how awesome this track was to race on. It was super racy all over. You could run the top, the bottom, or through the middle. I hope the fans appreciated it.”

It appeared that not only did the No. 25R machine get faster, but mid-race leader Matt Sheppard began to slip back. Sheppard eventually finished fourth, allowing Rudolph to make up some of his points deficit.

Despite being a superb driver, no one can do it alone. Rudolph went on, “I want to thank my crew, all my sponsors here on the car, all my fans, and everyone that keeps me going.”

“Hopefully bigger and better things will come. We’re certainly on a roll here and we’ll keep it going,” Rudolph promised his fans.

The $10,000 winner’s check will make the haul back to Ransomville, NY a little easier.

Runner-up Billy Decker had a very strong outing at the Ohio half-mile. Not only did the Gypsum Racing veteran wheelman finish second in the 100-lap Feature, but he grabbed the Billy Whittaker Cars Fast-Time Award with a lap of 16.303 in Time Trials. It was his second Billy Whittaker Cars Fast-Time Award of 2019. It’s also his seventy-fifth quick time in Series action, which is the most all-time.

Decker was pleased with the result, “We’ve been struggling most of the year but we made a big gain tonight. We got it all together. It feels good after a disappointing run at Weedsport. We turned it around. The 25R and the 9S have been the best cars all year when the 44 isn’t there, so we’ll get a second and get out of here happy.”

With eight laps to go the caution flag flew when Chris Hile blew a left rear tire and came to a rest on the front stretch.

“I thought [the restart] would give me a shot but I also thought it would give Matt [Sheppard] a shot back at me. He fired a little bit better on the restart but as it went on I got a little bit faster. The 25R was just a tick better all along. He could go to the top and middle of [turn] three and get off of four better than the rest of us could,” said Decker.

Rounding out the podium was St. Catherines, Ontario native Mat Williamson in the No. 88 Buzzchew Chevrolet machine.

Williamson’s race had a similar cadence as Rudolph’s but didn’t quite top out the same way at the end of the race.

“At the beginning, we struggled but in the middle we put some laps together but I think we just used it up coming from the eighth spot. I faded a little on the first lap and had to pass some cars to get up here,” noted Williamson.

He went on, “I don’t think I had anything for Erick [Rudolph] before the caution but when you see a restart like that it gives you hope. We didn’t fire as well as he did. Good run for those guys.”

Gander Outdoors NASCAR Truck Series standout Stewart Friesen was forced to go to a backup car after the motor in his primary developed a problem in Time Trials. That put the No. 44 Halmar car to the tail of the 100-lap Feature for switching to a backup car without informing Series officials. From there he advanced twenty-one positions to finish eighth. With that effort, Friesen picked up the KSE Hard Charger Award.

Tomorrow, August 1, seventeen Big Block Modified drivers will put on a 20-lap Invitational race in support of the NASCAR Gander Outdoors Truck Series at Eldora Speedway. The field will be set by timed Hot Laps and they will get turned loose just before the Truck Series Last Chance Race.