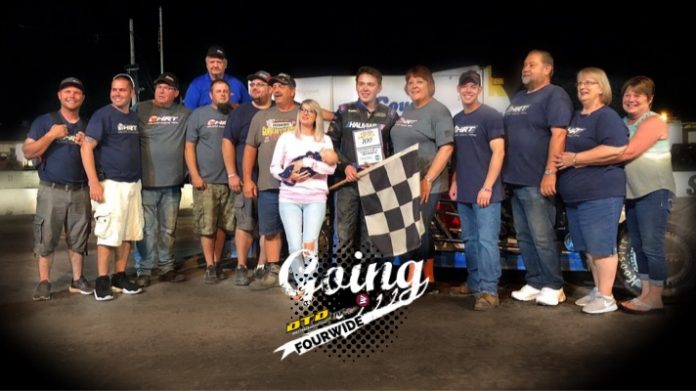 Daniel Morgiewicz , driver of the Halmar International #15M Sportsman is Going FOURWIDE fresh off his victory Saturday at the newly resurfaced Orange County Fair Speedway.  Daniel Checks in on the win and more.

DANIEL ON SATURDAY NIGHT’S RACE : “ Saturday started pretty good, we were slated to start 4th in our heat, but started outside pole because of a driver dropping to the rear. We started 2nd and got to the lead for a few laps before the car got tight, I had to much front break in the car. While the car got tighter, I fell back to third, but soon a caution came out, and I was able to adjust the breaks which in turn affected the handling of the car. Eventually finished third, which lined me up starting 13th in the first feature, on the start fell back to 16th I think, but drove back to finish 12th. For the 2nd feature, the winner of the first picked a pill to invert the field, which he drew 15th, so that lined me up starting 4th in the second feature.  Running 4th for most of the race, racing hard with 2nd and 3rd the caution finally came out after I passed for 3rd. Restarted in 3rd and quickly passed for 2nd and was passing for the lead going into turn 1, before another caution would come out. Restarted 2nd, which I thought was going to hurt me because I hadn’t been running the top, because I had so much drive off the bottom. On the restart, I quickly got to the bottom and was eventually set the move up to pass for the lead. Passed going into turn 3, and lead the remaining three laps.

The win is really big for the family and me. We had been struggling a lot this year, especially at Orange County. I have had no luck; it seemed if a wreck happened, we were always right in the middle of it. So this was definitely a confident booster for us all going into the end of the season and the bigger races.”

DANIEL ON THE NEW SURFACE : “ The new surface is awesome, definitely different then we had before. I think it has created some great side by side racing that has allowed drivers to come from midpack and contend for a win. Its nothing like I have raced on before, super slick and like an ice skating rink. We went to the two practice sessions with Janiak’s small block that I had been using to get my feet wet with, and I felt that the handling of the car was way off. It was just free, and not hooked to the track, so I was a little nervous going into this weekend. But with the adjustments, we did make at the track on those test days, and in the shop the car proved to be a rocket ship, having such drive off the corners. New takeaways from the new surface are that it definitely levels the field out more, everybody is back to square one and will take some time for everybody to get used to.”

DANIEL ON THE ‘19 SEASON : “ The year has been decent so far. We have a win at both Orange County and Accord, along with some other good runs at both tracks. Wish luck could be on our side a little more, and we could of had some more better finishes, but we all know how moody lady luck can be. Currently, at Orange County, I sit 7th in points, Accord in 8th and the Short Track Super Series North (STSS) 9th in points. With a few more races to go at each track/ series, I hope to jump a few more spots. We borrowed Janiak’s small block to do some traveling with to Five Mile Point and one race at Orange County while the Sportsman was off, while we didn’t have the results we hoped for, I definitely learned a lot and can not wait for an opportunity like that again.

For the rest of the year, we will finish off at Orange County, Accord and the STSS series and attend some of the bigger races in the area.”

GET TO KNOW DANIEL WITH THE QUCIK FOUR :

I chose number 15 because that is the day I was born, and M for the last name Morgiewicz.

WHO IS YOUR BIGGEST RACING INFLUENCE:

My biggest influence in racing is Matt Janiak; he brought me into the racing scene when I was about nine years old and have been hooked ever since. Without him and his family, I might not be living this journey that I love so much!

WHAT IS THE BEST ADVICE YOU HAVE BEEN GIVEN ?

Stay calm, and HAVE FUN!!

MONEY ASIDE , WHAT TYPE OF RACING WOULD YOU LIKE TO DO?

I would like one day to race the Super DIRTCar Series. Would be awesome to travel around to the different states and tracks to race on, also racing on multiple tracks and surfaces I feel makes a better and more diverse driver!

Finally, I’d like to send a big shoutout to all of my sponsors: Halmar International, Lighting Auto and Truck, Maggie & Steve Race Nuts, Napa Midnite Auto Parts, Cenpeco Lubricants, Sosler’s Garden and Farm Equipment, and S & S.O. Produce Farms.  Also, I’d like to individually thank my Mom and Dad for all of the time and effort they put into this all.  To all of our crew that help night in and night out, those that make the long hauls to all the different tracks as we travel around. Also a big Lastly, THANK YOU John Bockhorn, you are the brains behind it all and give me such a fast car so that I can contend for a win each time I hit the track.  Thank you for taking time away from your boating life to be apart of this small race team. Without all of you, NONE of this would be possible.