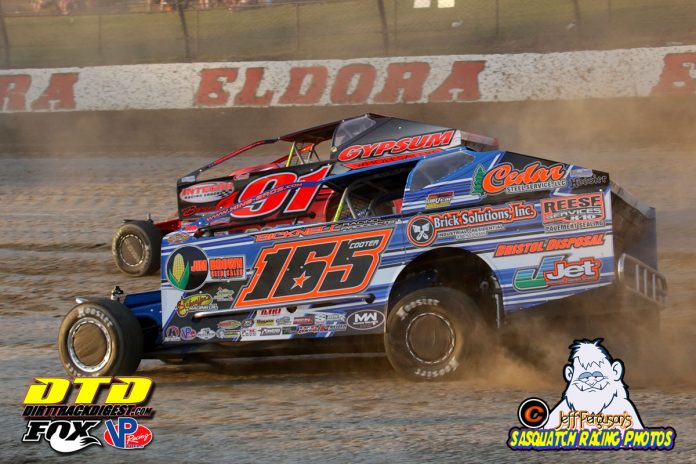 When looking through the feature rundown on Wednesday night one name in the top five is not someone New York race fans would be accustomed to seeing.  Rex King Jr., is a known commodity for those in the Western Pennsylvania and Ohio Modified community.  He wins consistently with the BRP Modified Tour.

Wednesday night the Bristolville, Ohio, native hung with the best Central New York Modified racing has to offer.  King led a handful of laps in the early go before giving way to Matt Sheppard and only a couple other drivers.  At the conclusion of the 100-lap feature King finished fifth.  A career best with the Super DIRTcar Series.

“Tonight was the best finish I’ve ever had with the series,” said a still smiling King after the main.  “We learned a ton on the car and my driving.  I learned so much falling back a bit.  When (Mat) Williamson went by and (Matt) Sheppard, and even when Lightening (Larry Wight) went by we ended up passing him back.  I learned so much watching these guys.  To put it in perspective, to be able to race with them, it really helps me out a ton.  That is how you get good.  You got to get your ass beat and I’ve done that plenty.  This is a good change of pace.”

King redrew the pole position before rocketing out to the lead.  Early on he was up to the challenge for all who tried.  He kept Billy Decker, Sheppard and others at bay.  He eventually gave way on a lap 31 restart when Sheppard went by through the middle lanes through turns one and two.


“We had a good run early on, but we are just inexperienced in 100 lappers,” deadpanned King.  “We led early and I knew that I probably hugged that bottom too much going into one and Sheppard got on the outside of us and drove around me.  He schooled us a little bit.”

It wasn’t King’s first foray with success at Eldora.  The last time he was at Eldora he was strong only to have mechanical issues sideline his efforts.

“A few years ago we were running real strong here and had motor issues,” added King.  “I always felt like that was the one that got away.  I told everyone that story.  To come and back it up with a top five tonight, I couldn’t ask for more really.”

A top five with the series is something King will celebrate for a while.  He had a chance to mix it up with the best in Modified racing and he proved he belonged.

“In my heat race I passed Billy Decker, which a guy like me never does,” he said laughing.  “Then I was tracking Sheppard down in that race as he was falling off the pace there late.  I was trying to pass him because it’s a personal goal.  Any time you can go home and say you passed Billy Decker and Matt Sheppard in the same night, it’s a good damn night.”

It was a damn good night indeed for King.