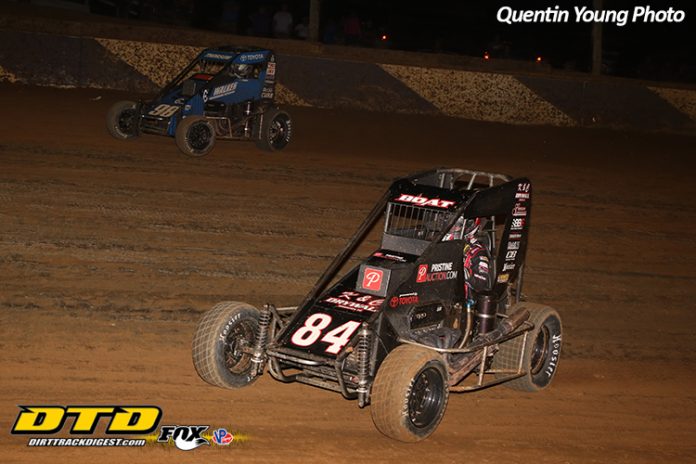 SPRING RUN, PA – Chad Boat may have been Arizonian-born and bred, but his Pennsylvania Midget prowess of late has made the Keystone State sort of another adopted state when the USAC NOS Energy Drink Midget National Championship arrives in the late summer.

Thursday night at Path Valley Speedway Park, Boat, who now actually resides in Mooresville, North Carolina, endured a lap-after-lap attack from Zeb Wise for much of the middle of the 30-lapper to win his first of the year. In fact, it was his first victory with the series since the Pennsylvania Midget Week finale almost exactly one year earlier following an up-and-down first half of 2019.

“It definitely feels good,” Boat exclaimed. “We’ve kind of been just mediocre since the end of Indiana Midget Week. We ended that week strong with a third, a second, and we’re knocking on the door. Then we went to Joliet and were decent but blew a tire. We ran fifth the first night out here and had a good run going last night, but it feels good to close one out. When you put yourself in a position to win races, you’ll eventually win them.”

The victory was Boat’s second-straight at the quarter-mile dirt oval dating back to his last visit in 2017. His all-time leading fourth career Pennsylvania Midget Week triumph elevated him past Mel Kenyon as the winningest USAC National Midget driver in the state of Pennsylvania.


The victory was extra special due to the fact that Chad equaled his father, Billy, on the all-time USAC NOS Energy Drink feature win list with nine. It’s an impressive accomplishment no matter which way you slice it, but Chad is quick to give credit to pops, a three-time “Turkey Night Grand Prix” Midget winner and Indianapolis 500 pole winner.

“He’s got a lot more west coast wins than I do and a lot more overall,” Chad said. “To have nine national wins, there’s not a lot of people who have that many, and we’re still going.”

Boat began the feature from the third position, but immediately married himself to the bottom and drove by both pole sitter Tanner Thorson and outside front row starter Chris Windom, with Boat emerging from a three-wide tussle off turn two with the lead.

Boat was the lone occupant in the top-four utilizing the bottom. Second-running Thorson tried to follow suit in turns three and four, but previous night’s Kutztown winner Zeb Wise ripped the top around Thorson to gain second as Boat stood tall 1.3 seconds ahead of the fray.

“I really wasn’t sure if the bottom was going to be that good when we rolled out there,” Boat admitted. “The top didn’t look great; it was kind of dusty, but in one and two, there was a little bit of a lip to run on. I was pretty tight and thought I could run anywhere, then I got a good start and got by those guys on the first lap.”

By lap ten, Boat cut through lapped traffic to build his advantage to over two seconds before the yellow fell for the stopped car of Bobby Butler in turn four, forcing a restart with 16 to go and the path now clear of traffic.

On the restart, Boat retook his chosen place on the bottom as Wise jumped back up top, resuming an early mid-race battle from the previous night when Wise took the lead from Boat in the same time frame, just before halfway. Tonight, Boat aimed to mold that narrative in his favor, although Wise pasted himself right to Boat about a car length behind and a car width to the right.

Wise kept after it, gaining closer and closer with a sweet run against the rail through turns three and four to nip Boat at the line by a sliver of chrome. The two remained wheel-to-wheel throughout the duration of the following three laps with Boat on the bottom and Wise up top, Wise eke-ing out the lead at the line again on the 18th lap.

Boat proved the low line still had everything he desired, returning to the lead with authority to beat Wise by inches at the line on lap 19. However, Wise was game, and surged back to the front on lap 20 by the narrowest of margins at the stripe. Boat got a run on the bottom going again between turns one and two as Wise bobbled atop the cushion, losing valuable real estate to Boat. Just behind, though, in fifth, Kyle Larson biked at the top of one before coming a to a rest. His car was towed back to the work area where repairs were made, and he returned for a 13th place finish.

The yellow reverted Wise to the head of the pack in front of Boat for the lap 21 restart. Rinse and repeat as the two stayed in their lanes and waged war once again. On the 23rd lap, Boat moved back ahead for good, beating Wise to the line by a car length.

Two laps later, 14th running Karsyn Elledge tipped over on the bottom of turn two, an incident which also collected both Larson and Steven Drevicki. That left one final restart for Boat to fend off Wise.

Boat trekked back to the bottom as Wise went to the top, bouncing off the curb, thus allowing both Windom and Thorson by on the bottom. The front of the field followed Boat on the bottom as he built a one second advantage over second in the final laps to carry onward to a victory by 1.079 sec. over Windom, Tyler Courtney, Thorson and Logan Seavey.