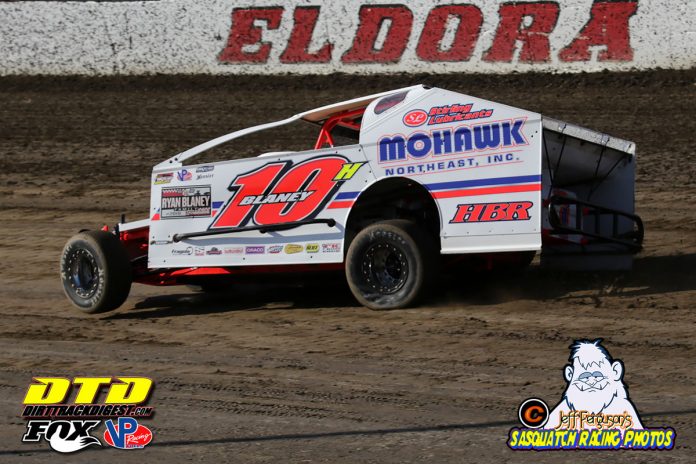 ROSSBURG, OH – The Buckeye Bullet, Dave Blaney, took his first career Super DIRTcar Series victory in a 20-lap showdown on the mighty Ohio high banks of Eldora Speedway. The crowd erupted when their hometown hero undid his safety belts and stood before the massive Eldora crowd.

Super DIRTcar Series star and fellow HBR driver Jimmy Phelps crossed the line in second after starting on the pole. Invader Josh Hofenforst finished third with a strong run on the Eldora half-mile.

In 2016 it nearly all came crashing down for Dave Blaney in a violent accident in turn one at Eldora Speedway. To come back to the track that nearly ended his career, and win in a Big Block Modified, is a tremendous accomplishment.

“It’s cool to win any time here. We had some days way back in the 90s here in the sprint car and it’s fun to come race here in a Big Block Modified. It’s great to race in front of all of you fans and especially to win one.”

The Baldwinsville Bandit Jimmy Phelps threw everything he had at his teammate Blaney but the Buckeye Bullet kept the car straight, fast, and out in front for the whole 20-laps. Phelps was able to hang on to second place.

Josh Hohenforst from Gloversville, NY in the No. 6H took third.

“This was our best finish with the Super DIRTcar Series. Last night we had a good run in the Heat Race, and really missed the setup and put us behind last night [Dirt Derby 100]. We made some changes in the car today and we timed really well. It helped to start up towards the front and got a podium finish out of it.”

Hohenforst was locked in and focused on his racing from green flag to checkered flag but still had a lot of fun.

“It’s awesome to put a show on down here. There are so many people that come down and look at these cars and they’ve never seen them down here in Ohio. It’s awesome doing this in front of a big crowd.”

Demetrios Drellos was the fastest in the Timed Hot Lap session, which awarded him the duty of pulling the pill to decide how many cars would be inverted for the start of the 20-lap clash. Drellos pulled the number eight and that’s what put the HBR Motorsports teammates Jimmy Phelps and Dave Blaney alongside each other on the front row.

Next up for the Super DIRTcar Series is Merrittville Speedway on Monday, August 5 where the winner will take home $8,000. The very next day, back across the border, Ransomville Speedway will take center stage for the thirty-fifth annual Summer Nationals.