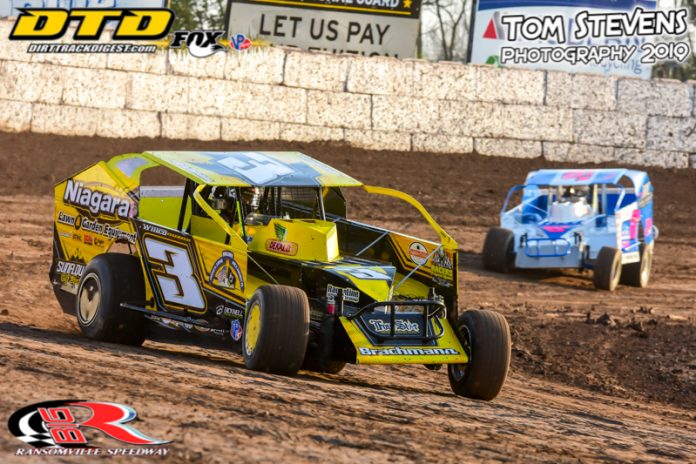 The other battle to watch was the one between Modified track championship contenders, Mat Williamson and Erick Rudolph. Williamson began the night with an eight point lead over Rudolph. Williamson started the race in sixth while Rudolph lined up ninth. The pair were racing for fourth place on lap 15 when they made contact in turn one. Rudolph just barely kept his car off the wall in turn one.

Brachmann appeared to have the race close to wrapped up on lap 18 when the caution flag flew for the first time for an incident involving Jesse Cotriss and Jeff McGinnis. Rudolph passed Williamson for third place on the ensuing restart.

One final caution on lap 28 for a spin by James Sweeting set up a green-white-checkered finish. Rudolph got by Lindberg to move into second in the closing laps, but was unable to catch Brachmann. Brachmann led all 30 laps for his first Modified win of the season at Ransomville.

Jonathan Reid led all 25 laps from the outside pole to win the Investor’s Service Sportsman feature. He was pursued throughout most of the event by Andrew Smith. The race ran caution-free, which forced the leaders to deal with lapped traffic in the closing laps.

Smith got boxed in behind a slower car inside the final two laps, which allowed Reid to score the victory. Dave DiPietro crossed the finish line second. Brett Senek and Kyle Inman were credited with third and fourth respectively. Smith rounded out the top five.

The turning point of the Ki-Po Chevrolet Street Stock feature came on lap 18 as Cory Sawyer and Pete Stefanski battled side-by-side for the lead. The motor expired under the hood of Stefanski’s car as he entered the third turn, which let loose a cloud of smoke. The mechanical failure ended his night two laps short of the finish after he had led every lap of the race up to that point.

Sawyer just had to survive a green-white-checkered finish to claim his fourth win of the season as he bounced back from a blowing a motor the week before. Anthony Guthrire came home in second followed by Jaren Israel, Bryce Richardson and Pat Dell.

Mike Kramarz held off Chris Leone to capture his fourth win of the year in the Gippster’s Collision Mini Stocks. Kramarz passed Dave Dussault on the third lap of the race to take the lead for good, but Leone was right behind him for the final 12 laps. Leone had a run on the final lap to the inside of Kramarz, but he couldn’t overtake the leader.

Clayton Cain led all 15 laps of the Novice Sportsman feature from the outside pole to score his first ever win. Cain, a second generation driver, held off four-time feature winner Bubby Pawlak to earn the victory. Sam Junkin finished third followed by Jordan Moden and Mike Martin.

Andy Imbeault dominated the Can-Am Cup Vintage Modified feature after passing Mark Shadwell for the lead on lap 6. Tim Natalino was the first Sportsman car across the finish line.

This Tuesday night the stars of the Super DIRTCar Big Block Modified Series roll into Ransomville for the 35th annual Summer Nationals. The Mods will battle for 100 laps and the top prize of $7,500. The Race of Champions Dirt Sportsman will make their first ever appearance at the “Big R” as part of the program. Hot laps and time trials start at 6:35 p.m. followed by racing at 7:15. The Ransomville Fire Company chicken barbecue gets under way at 4 p.m.