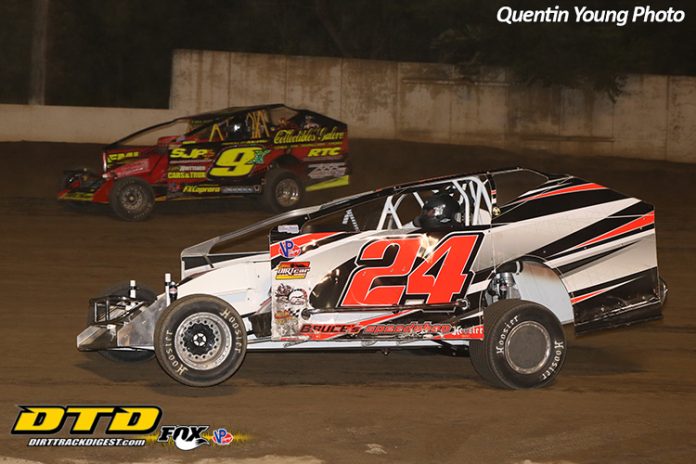 BREWERTON, NY – Jim Witko’s win at Brewerton did not come easy, spending roughly half the event with a car alongside him for the lead. However, the Clarks Summit, PA driver held off all challenges for his first win of the year.

Jim Witko and Roy Bresnahan ran door-to-door throughout the opening stages of the 35-lap Modified feature, with neither driver able to clear the other in the first ten laps of the event. While Witko and Bresnahan continued side-by-side, Tyler Trump climbed to third in his 358, with Ronnie Davis III following in fourth. As the race neared halfway, Witko was able to find some extra speed on the bottom and secure the lead, while Bresnahan was now under attack from both Trump and Davis.

On lap 20, Bresnahan gave the top lane to Trump, and both Trump and Davis went flying by. Trump, fresh off his first career Modified win at Fulton last week, kept his small block wound up on the cushion and slowly inched in on Witko, while Davis fell back a second or so behind Trump. Bresnahan slowly fell off the leader’s pace, slipping into the clutches of the wild battle from fifth on back. However, this big pack was a full straightaway behind the leaders of Witko, Trump, and Davis as the field took lap 25.

With ten laps left, Trump was reeling in Witko, and with Witko down low, Trump’s preferred lane on top was wide open. On lap 30, Trump got as far up as Witko’s quarter panel, but Witko’s Big Block power helped him keep Trump at bay. One slip on the cushion by Trump gave Witko some breathing room, and Davis was now close enough to give Trump a challenge.

Over the final five laps, Trump began to lose touch with Witko, who put together a string of excellent laps in the closing stages to put some distance between himself and second place. When the checkered flag waived, it was Jim Witko claiming his first win in a couple seasons with a brand-new car and motor, with Davis making a last-turn pass on Trump for second. Trump brought it home third, while Tim Sears Jr. and Larry Wight completed the top five.
“This car has been sitting in the garage all summer, I’ve been running my old one,” Witko said. “I was waiting on a motor, and let me tell you, it was worth the wait. I knew I had a good car after the heat, Mike Bowman came over and made some adjustments, and this is it”