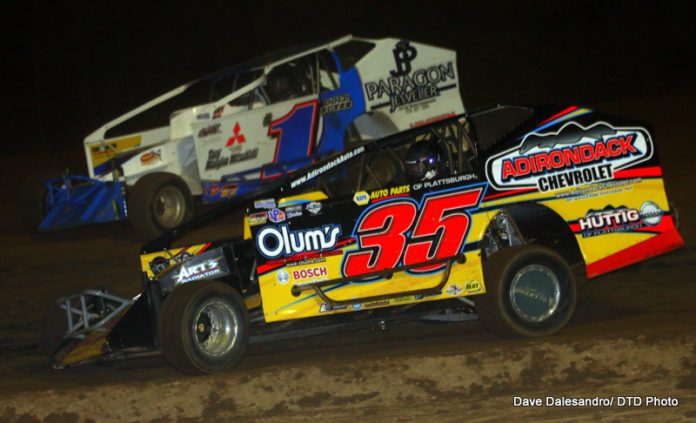 MALTA – When does a win not feel like a win?.

When the winner’s car has to be pushed into victory lane.

Mike Mahaney of King Ferry drove to his second win of the season in Friday night’s 35-lap modified feature at Albany-Saratoga Speedway on “John Grady Memorial Nostalgia Night,” but he was in no mood for celebrating after the victory.

“This is our last motor,” he said during the on-track victory lane ceremony. “I wasn’t sure it was going to make it.”

It made it just far enough, Mahaney had to be pushed across the scale to make weight, and then was pushed into the victory lane enclosure for more photos.

“We won three grand tonight, but I think we probably spent $15,000 to get here,” he said. “”I really have to thank Adirondack Auto for digging down and getting us an engine to race here tonight.”

The previous week, Mahaney didn’t even last one lap of the modified feature at Albany-Saratoga, falling victim to mechanical problems in the George Hutting-owned modified. Then he lost an engine during the Super DIRT Series stop at Eldora earlier this week.

Mahaney’s run of bad luck at Albany-Saratoga (he’s has just two top-five finishes following his first win on June 14) put him third on the starting grid for Friday night’s feature, but the event had more twists and turns than a John Grisham novel.

Elmo Reckner jumped out into the lead from the pole position, but following a restart on lap 3, Neil Stratton moved out in front.

On lap six, Brett Hearn brought out another yellow when he shredded his right rear tire, and as the field was under caution, Stratton came to a stop in the second turn, which gave the lead to Peter Britten.

Britten, who had flipped his car the previous week, only led the next two laps, because on lap eight, Jessey Mueller, who had started eighth, rocketed into the lead coming out of the fourth turn, tucking the DKM chassis right against the berm.

But maybe pounding the cushion wasn’t a good idea, because on lap 10, Mueller also blew his right rear tire, putting Britten back in front.

Mahaney, who has never been far from the leaders, then used a restart on lap 11 to take over the top spot, and that’s where he stayed.

When the bottom started to go away, the top five cars on Mahaney, Bobby Hackel IV, Keith Flach, Matt DeLorenzo and Ken Tremont Jr. were all running the top. On separate occasions, both DeLorenzo and Tremont tried to find some bite in the low groove, but they never succeeded.

In the final laps, Britten, who had fallen back to sixth, finally found something on the bottom, and worked his way back to second, but finished nearly four seconds behind Mahaney.

Completing the top five were Hackel IV, Flach and Tremont.

“The team really needed this,” said Mahaney. “I wish I could be more excited but because the engines cost so much, I feel terrible.”

With four laps to go, Duell, who was also running the outside, pulled even with Kelly and finally took the lead on lap 23.

“Last year was the first year I didn’t win a feature here in my career,” said Duell. “I wasn’t sure it was going to happen.”

Luke Horning drove to his first win of the season in the 25-lap pro stock feature. Nick Arnold started on the pole and quickly went out to the front, but was missing some great action behind him, as Kim Duell, Horning and Brandon Emigh were racing three-wide all the way around the track. On lap six, Horning bumped Duell, which opened the bottom for Emigh, who took over the No. 2 spot.

Horning, running up against the cushion, kept the pressure on Emigh, and finally took over second on lap 14, Two laps later, Arnold’s lead was gone and the next time around, Horning rocketed off the cushion coming out of the fourth turn to take the lead.

From there, he was unchallenged. Jay Corbin joined the battle for second, and banged off Arnold coming out of the fourth turn for the final time to finish behind Horning.

Points leader Dylan Bokus took another step toward his first track championship, winning the 20-lap Haun Welding limited sportsman feature. Once Bokus, who started seventh, took the lead, he left David Boisclair and Scott Bennett to battle for second. Boisclair secured the No. 2 spot on lap 18, and Bennett dropped to fourth, behind Bill August.

When there’s extra money on the line in the Lake Auto Parts street stock division, you can usually count on Randy Miller to get the win and Friday was no different, as he won the 20-lap feature and walked off with $300. The win was Miller’s fifth of the season, but his first since June 21. But that’s only because he took most of July off.

And what would a Nostalgia Night by without the DIRT Modified Nostalgia Tour? Jason Powers of Athens, Ontario, started on the outside pole in his Bicknell chassis with a Pinto body, and recorded his second win of the tour, with Bob Johnson second and Thomas Placey third.