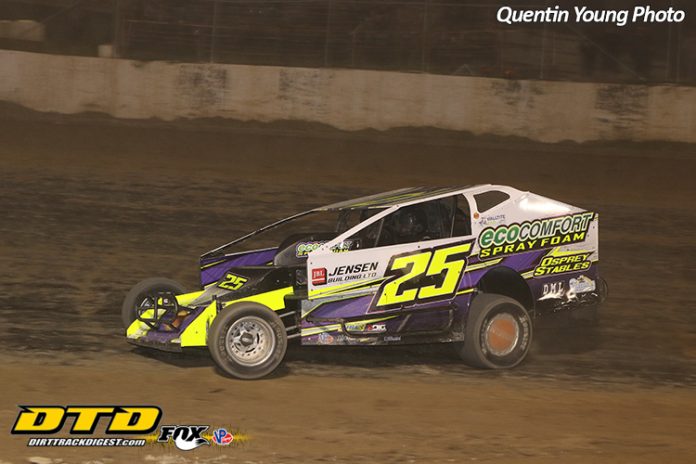 Bobby Herrington got the lead early in the 35-lap Modified main and wasted no time jumping out to a huge advantage, up to a full straightaway over second place Garrett Rushlow by lap 9. Behind Rushlow, Dave Marcuccilli and Ronnie Davis III were on the move, with Marcuccilli up to third on lap 12 and Davis right behind. While Herrington kept up his fast pace, Marcuccilli reeled in Rushlow, but couldn’t make a pass as the race hit halfway.

Around halfway, Herrington’s lead had stabilized at a straightaway over Rushlow and Marcuccilli, but Herrington would soon need to deal with lapped traffic. On lap 25, Rushlow got caught behind a lapped car heading to the pits, allowing Marcuccilli and Davis to slip by. Once in second, Marcuccilli cast a line and started reeling in Herrington.

Herrington’s lead that earlier peaked at five seconds was quickly evaporating. With five laps left, Marcuccilli had cut the lead nearly in half, and continued to reel in Herrington in the final circuits. However, Marcuccilli and Davis ran out of time, and Bobby Herrington crossed the line first by less than a second for his first win of the season. Marcuccilli and Davis came home second and third, while Larry Wight made up a ton of ground late for fourth, and AJ Kingsley rounded out the top five.


“We’ve had good speed every week this year, but had a hard time keeping things together,” said Herrington. “Lots of part failures and other stupid stuff. The flagger gave me a signal that I had a good lead so I was able to relax a bit and move around, I was just hoping for no cautions at the end.”