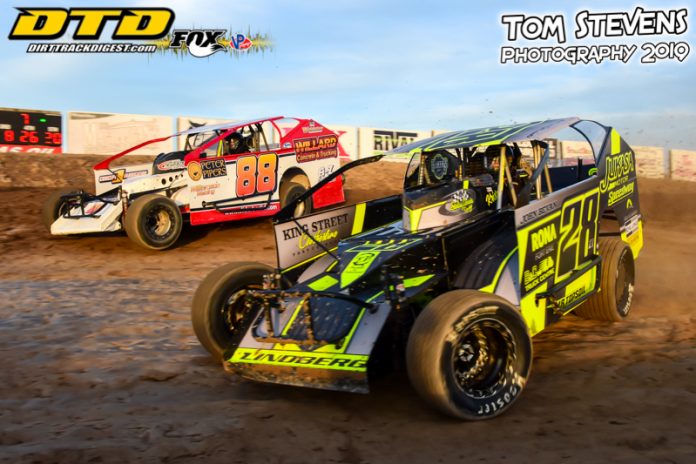 Jordan Cosco and Jay Mallory were on the front row in the 25-lap feature for the David Chevrolet DIRTcar Sportsman with Cosco showing the way. Cosco, Mallory, and Paul Gaboury would start to pull away as Dave DiPietro and Ryan Ferri raced inside the top five. Mallory would take the lead away from Cosco on lap five as DiPietro would make it a three-car battle for the top spot. Cosco would regain the lead on lap eight as DiPietro would fall in the clutches of Brent Begolo, as Begolo entered the top five on lap 10. Begolo would go three-wide with DiPietro and Mallory and would battle for several laps. Begolo would work the outside of the racetrack to take the lead away from Cosco on lap 22. Begolo would go on to score the win, his first of the season.

Craig Martin and Rob Misener were on the front row in the main event for the Doidge Building Centres Mod Lites with Misener showing the way. Tyler Winger and Chris Watson got together on the front straightaway to bring out the races’ first caution on lap two. On the restart, Jeffery May would take the lead away as Josh Sliter challenged Misener for second place. Sliter would spin while going for second on lap seven to bring out the caution. The restart would see May start to pull away from the field as Randy Giroux and Chris Watson battled for second place. May would go on to score his first victory of the season.

Rob Shaw and Tina Ronning shared the front row for the Dave’s Auto and Speed Centre V6 feature with row two starters Kevin Conley and John Couture making it four-wide off the start to take over the top two positions. Couture would clear Conley for the lead at the end of lap one as the top two pulled away from the field. Couture would hold off Conley to score the feature win.

NEWS AND NOTES:  82 cars signed in pitside for the racing action.

Merrittville returns to action on Monday, August 5, Bobcat of Hamilton and Baron Roofing & Siding presents the Big Block Modified Super DIRTcar Series as well as the BEI Lightning Series for Sportsman plus the $1,000 to-win Insta Panels Duel on the Dirt combined race for the 4 Cylinders. Join us starting at 4 pm for a pre-race Chicken BBQ from John Michaels Banquet Centre. Pit and Grandstand gates will open at 4 pm with racing beginning at 7 pm.