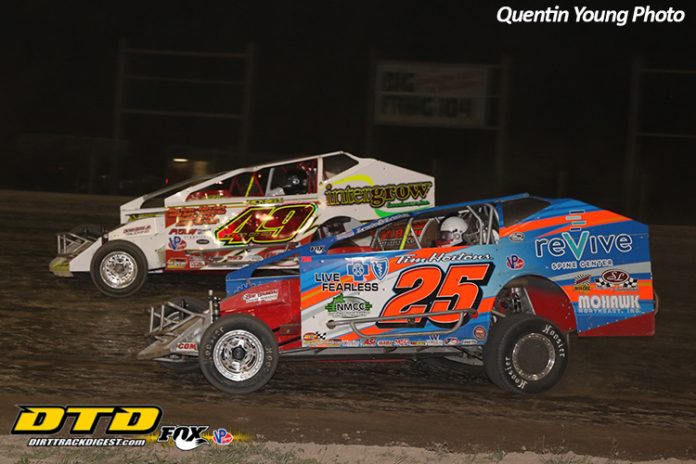 VERNON, NY – Erick Rudolph was the man to beat at Utica-Rome, running off to a 50-lap feature win in the Jan Corcoran Memorial.

Danny Varin led the opening laps of Jan Corcoran Memorial over Pat Ward and Billy Dunn, but all attention was focused on Erick Rudolph. After redrawing tenth, Rudolph charged all the way up to second by lap six, leaving Ward, Dunn, and Matt Sheppard to battle for third. Once in second, Rudolph went hunting down Varin, closing to within a second by lap 12.

Once Rudolph caught Varin, he began to search for a way by. However, Varin was rock solid in his line, the bottom of turns one and two and the top of three and four, and Rudolph couldn’t find a lane past. As the leaders worked through lapped traffic, Varin came off the cushion in turns three and four, taking away the lane down low that Rudolph had been experimenting with. In return, Rudolph took the top line vacated by Varin, driving by and into the lead on lap 23.

Varin’s good run came to an abrupt end, as he slowed on lap 25 and brought out the caution while still right on Rudolph’s bumper. This put Dunn alongside Rudolph for the restart, and neither Dunn, Ward, or Sheppard could match the leader’s pace as Rudolph quickly built up a big lead. Rudolph’s lead was over a straightaway when the caution waived on lap 33 for Brad Godshalk’s mechanical trouble.


Dunn gave chase on this next restart, but hopped the cushion and slipped back to fifth, allowing Sheppard, Ward, and Gary Tomkins by. Another quick yellow on lap 37 let Sheppard line up alongside Rudolph, but just like the run before, Rudolph set sail and motored away.

Over the final ten laps of the race, Rudolph kicked on the afterburners. Every lap, Rudolph put some more distance between himself and Sheppard, and behind Sheppard, Ward and Tomkins were having a fun fight for the last podium position. When the checkered fell, it was Erick Rudolph crossing under it first, scoring a dominant win in the 50-lap Modified main. Matt Sheppard came home second, five seconds behind Rudolph, while Gary Tomkins, Pat Ward, and Billy Dunn completed the top five.

“I could see I was a little quicker than Varin, but we were running the same line so it was tough to get by,” Rudolph said. “Our car was super maneuverable all night, and I can’t be happier with how things are going. I saw Sheppard line up next to us on the restart, that’s not the most settling thing to have in your mind, but we had a good car and ended up with the win.”

Matt Sheppard got to restart next to Rudolph on lap 37, but could only watch him drive away late in the race.

“We kind of threw a couple things at it, and we missed,” stated Sheppard. “Happy to be back at Utica-Rome, but we definitely have some work to do.”

“First time I sat in the car was tonight,” Tomkins said. “I had to spend most of the night learning the car, we just threw some stuff at it and we were pretty good in the feature. Finishing third behind these two, I’ll take it any day of the week.”