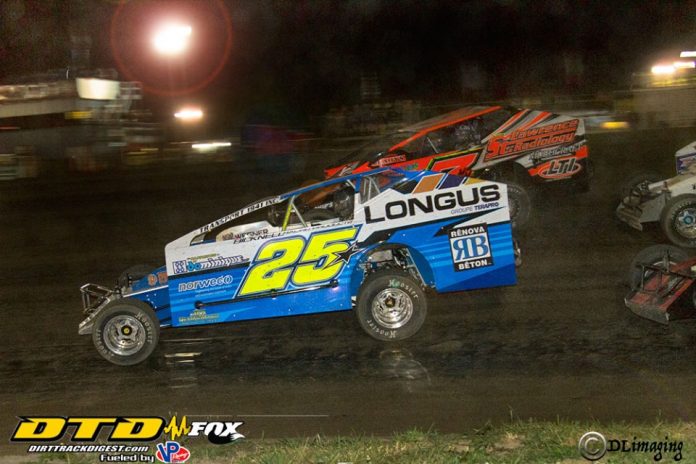 CORNWALL, ON – Twin Leaf Stores presented a big night of racing at Cornwall Motor Speedway with the 3rd round of the Fat Les Chip Stand Canadian Nationals Modified Series and final round of the Race for the Cure Sportsman Series and a full program.

Chris Raabe and David Hebert were on the front row of the 100-1ap Fat Les Chip Canadian Nationals feature as Raabe jumped to the lead over Hebert with Mike Maresca, The first yellow came out on lap 6 as Mike Stacey brought caution as he spun out in turn 2. Raabe kept the lead with Hebert keeping in distance from the leader.  The bottom portion of the speedway was working well as Maresca moved ahead of Hebert on lap 32. The top portion came alive with 40 laps completed as Steve Bernier showed his colors and started to pass the front runners and took the lead on lap 51 with Maresca moving to second as Mario Clair was quick as well and took third as Raabe faded to 4th with 55 laps in the books. The leaders were all together as Bernier and Maresca exchanged the lead with 35 laps to go, Bernier keeping the lead with Maresca and Clair. Caution lights came out on lap 83. Bernier kept the first with Maresca in second and Steve Bernard moving to third. Bernier led the final laps to get his first win of 2019 at Cornwall over Maresca and Bernard.

Shane Pecore took the lead in the 100-lap Race for the Cure finale as Jarett Herbison in second and Gabriel Cyr in third. Pecore took a commanding lead over the field as Brianna Ladouceur moved to second with Ryan Stabler in third. As Pecore led the way, Kurtis Cayer was strong on the top lane and moved to second with 20 laps completed. Pecore in command with some changes behind him with Ladouceur and Stabler back in the top 3 with 40 laps completed. At halfway point, Pecore still leading the way with Cayer back in contention with Ladouceur in third. Both Ladouceur and Cayer switched positions with Ladouceur. Lap traffic was started to be a factor in the final portion as Pecore had company in Ladouceur with less than 20 to go. A yellow flag on lap 87 brought the field together. Pecore to the lead with Cayer moving back to second with Ladouceur in third. Pecore led the final laps to capture a 7th win but mostly the Race for the Cure Sportsman Series title over Johnathon Ferguson and Moise Page in third.

The Alexandria Home Hardware Pro-Stock 20-lap feature saw Dave Bissonette taking the lead with Marc Lalonde on his backbumper, Lalonde took the inside lane and passed Bissonnette for the lead. Lalonde pulled away from the field at halfway point and led the final portion to claim his second feature of the season.


A solid field of 15 cars took the initial green in the Assist2Sell Mini-Stock as Marc Dagenais taking the lead over Chris James and Justin Jodoin. A few cautions slowed the feature as Mike Gaucher took the lead on lap 6 with Dagenais in second and James in third. Gaucher never looked back to claim a second feature in a row in front of Dagenais and James.

The Northeast Late Model Alliance will be in town next week along with a complete race program.