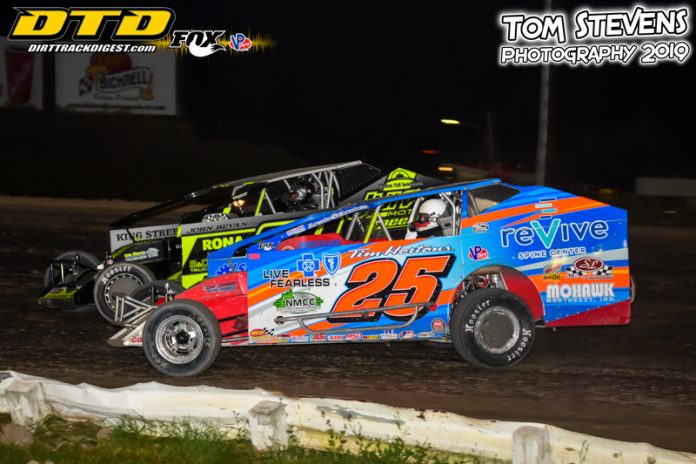 THOROLD, ON – Ransomville, NY’s Erick Rudolph outfoxed local Merrittville Speedway stars Ryan Susice and Gary Lindberg to pick up his fourth Super DIRTcar Series win of 2019. Just when the capacity Thorold, Ontario crowd thought it would be a duel between two of their best drivers for the $8,000 payday, Rudolph’s No. 25R came roaring through the top of the field. Finally, Rudolph made the decisive move with five laps to go and captured the checkered flag.

Rudolph started in sixth and kept the top three in his sights all race. Before battling Lindberg, the pilot of the No. 25R’s toughest challenge was the Billy Whittaker Fast-Time Award recipient Billy Decker in his crimson red Gypsum Express No. 91. Decker had been fast all day and refused to let Rudolph get by easy.

From there, lapped traffic was the key to Rudolph tracking down the leader Gary Lindberg and second-place Ryan Susice. The No. 28T and No. 3RS may have had the right strategy for the track, but Rudolph would not be denied. He started entering turn three high and then rounding off the turn and running downhill through turn four. This allowed him to catch and run down the leaders when they reached traffic on the straightaways.

“I was a little bit better in lapped traffic and about the same speed one-on-one. It seemed like he [Gary Lindberg] needed to be in his specific lane. The local 358 Modifieds here are the best in the Northeast. It was tough out there. I don’t think I would have gotten him if it wasn’t for lapped traffic. Nevertheless, here we are in Victory Lane. The car was performing up to expectations,” said Rudolph.

The No. 25R team has been on an absolute hot streak as of late. For Rudolph, it comes down to the decisions they’ve been making as a team.


Rudolph noted, “We’ve been making the right decisions. We show up at the track with the same car and we just gotta make the right decisions and wise choices. Hopefully, we can keep being smart. I’d like to thank all my fans, sponsors, and my crew here beside me. They’ve got my back no matter what and it’s nice knowing that. I’d like to thank the track for putting this race on.”

Next up the Series rolls into Rudolph’s home track of Ransomville Speedway on Tuesday, August 6.

“Ransomville’s been good to us so far this year. It’ll be a good show tomorrow.”

After leading a vast majority of the laps, Gary Lindberg, a surprise Top 6 qualifier in last year’s Billy Whittaker Cars 200, had to settle for second place.

Lindberg described his race: “We had a good car for sure. Then I saw Erick [Rudolph] on that restart and I knew he was going to be fast. But then I didn’t see him after a few laps, so I thought we were good. But then I came upon those lapped cars and they were racing side-by-side and probably not watching the flagman either so I couldn’t get them.”

There is nothing more frustrating for a leader than when lapped traffic is battling amongst themselves for position. Announcer Shane Andrews noticed that the No. 28T started to use the chrome horn to make his way through towards the end.

“I used it [his bumper] too late. I didn’t use it until I saw Erick. Then I hit a couple in a row and tried to move them. But that’s not the ticket either. You’ll end up giving yourself a flat. I calmed back down and it is what it is,” Lindberg said.

Lindberg continued, “The race car was really good. I think I don’t know for sure. We started on the front row but it felt really good. I don’t think we could change much. It was real slick out there.”

Susice said, “We were just a little off from where we needed to be. We were better on the long run and we had a caution right at the end. Congrats to Erick, he’s on fire. Gary had a helluva run. I think it really speaks volumes about what we’ve got here in terms of competition to have two local guys up in the front.”

King Ferry, NY’s Mike Mahaney has been experiencing engine trouble as of late with his Big Blocks. Mahaney won the Feature at on Friday night at Albany-Saratoga Speedway but the engine showed signs of trouble on the last lap. Unfortunately, Mahaney was then forced to put a 358 Modified motor in the No. 35 while the Big Blocks were worked on. That means he only receives half the points he earned per Super DIRTcar Series rules.

Dave Marcuccilli made the tow and had a solid outing. He worked his way into the Top 12 Redraw and drew position number twelve. Fortunately, that position also awards a free Hoosier Racing Tire along with it. Marcuccilli hanged tough for the entire 100 laps and finished right where he started.

The Series heads back across the border to Ransomville Speedway for the thirty-fifth annual $7,500-to-win Summer Nationals.